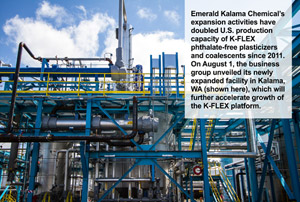 plasticizers and coalescents. The company has doubled its U.S. capacity for the K-FLEX line at its Kalama facility since 2011, and will reportedly dedicate an additional reactor for production and R&D this fall to accommodate needs for increased manufacturing and product development. The company recently held a ribbon cutting ceremony, which included tours of its newly expanded facility in Kalama, Wash.

According to Edward Gotch, president of Emerald Kalama Chemical, the execution of the company’s latest expansion was a success. “This business has completed a major project or acquisition every year since the company was formed in 2006,” he said. “Our growth will accelerate going forward to align with our strategy of expanding as an innovative leader in this key platform. With 10 new product concepts active in our R&D pipeline, the new large, semi-works reactor will support product and customer scale-up. It will also provide an additional 10 million lbs of capacity to support production needs. Future expansions are planned in the U.S., Europe and Asia.”