Improved Plasticizers Help to Fill the Gap in Polysulfide Sealants

Polysulfide sealants are known for their excellent resistance to solvents, chemicals, low temperatures, and flex-cracking, as well as good adhesion, elasticity, and impermeability. These characteristics make them a valuable solution in applications such as insulated glass seals, construction joints and sealants, aerospace (particularly sealants for aircraft fuel tanks and bodies), and secondary containment.

Polysulfide sealants for insulated glass and construction are primarily offered in a two-part package. Both parts contain plasticizer to deliver essential performance characteristics to the sealant.

While the role of the plasticizer is critical, safety concerns have plagued the plasticizer chemistries that have historically been favored for polysulfides. These include benzyl phthalates and certain chlorinated paraffins, which are increasingly subjected to regulatory pressure and restrictions.

Recently, novel monomeric and oligomeric dibenzoate plasticizers have been introduced; these new plasticizer solutions have been specially tailored for polysulfide sealant applications. These plasticizers have been found to be high-performing, low-fogging alternatives to traditional chemistries used in polysulfides. Additionally, they are expected to be more environmentally friendly, safer, and REACh-compliant alternatives to chemistries such as chlorinated paraffins. Data is presented below to demonstrate the performance of one of these recently commercialized plasticizers.

Figure 1. Viscosity characteristics equivalent to phthalates in the B-side of polysulfide sealant.

Both components of a polysul­fide system, the polymer side and the catalyst side, must have similar viscosities for even mixing. B-side polysulfide sealant formulations formulated with the new oligomeric benzoate plasticizer exhibit similar viscosity characteristics to the leading phthalate plasticizer. In addition, the formulations exhibit excellent viscosity stability in centrifuge tests (1,000 rpm for 60 minutes), with no signs of settling. 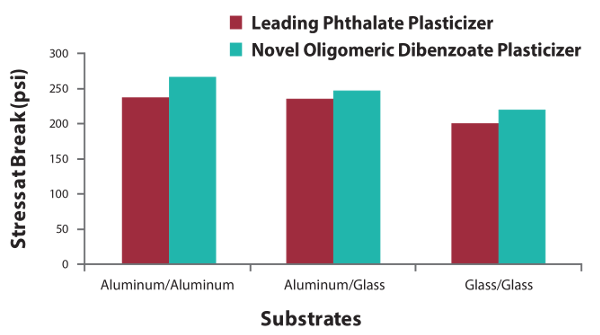 Replacing a phthalate plasticizer with the new oligomeric dibenzoate plasticizer in the B-side resulted in cohesive failure and improved lap shear stress at break, demonstrating good adhesion to substrates such as aluminum and glass.

Figure 3. Faster hardness development in the B-side of polysulfide sealant.

Together, these new plasticizers offer a complete package option to optimize performance in both components of polysulfide sealants. In addition to performance and economy, these plasticizers provide formulators with the option to replace chemistries under pressure from regulatory restriction and consumer preferences.

Disclaimer: The information contained herein is believed to be reliable, however is based upon laboratory work with small scale equipment and does not necessarily indicate end-product performance. Because of variations in methods, conditions and equipment used commercially in processing these materials, Emerald makes no representations, warranties or guarantees, express or implied, as to the suitability of the products for particular applications, including those disclosed, or the results to be obtained. Full-scale testing and end-product performance are the responsibility of the user. Emerald Performance Materials shall not be liable for and the customer assumes all risk and liability for use and handling of any materials beyond Emerald’s direct control. Nothing contained herein is to be considered as permission, recommendation nor as inducement to practice any patented invention without permission of the patent owner.