Click here for the The ASI Top 25 Fast Facts Infographic
This issue of Adhesives & Sealants Industry Magazine brings our exclusive ranking of the top 25 manufacturers of adhesives and sealants. ASI combined reader survey information with details from company websites, annual reports and press releases to compile the rankings (sources beyond the survey results are included with each listing). Included with each company’s listing are contact information, estimated 2011 adhesives and sealants sales figures (if publishable), and number of employees, as well as a company profile.
Revenue figures were provided by company representatives and verified whenever possible. While our staff made every effort to seek out the top companies in the industry, some companies may have been inadvertently omitted. We will work throughout the year to provide any changes or updates on our website version of the ASI Top 25 and in next year’s ASI Top 25 issue. To include your company in our listing, please contact managing editor Teresa McPherson at mcphersont@bnpmedia.com.

3M is a science-based company that produces thousands of imaginative products and leads a range of markets—from health care and highway safety to office products, abrasives and adhesives.

Henkel operates worldwide in three business areas: Laundry & Home Care, Cosmetics/Toiletries and Adhesive Technologies. Adhesives, sealants and surface treatments from Henkel serve the transportation, electronics, aerospace, metal, durable goods, consumer goods, maintenance, and repair and packaging industries, with a range of products for the craftsman and consumer. “Henkel expects sales to grow in 2012 and is confident of continuing its positive growth trend in sales and earnings,” says a Henkel source.

Dow Corning provides performance-enhancing solutions to serve the diverse needs of more than 25,000 customers worldwide. A global leader in silicones, silicon-based technology and innovation, the company offers more than 7,000 products.

For more than 75 years, MAPEI has produced adhesives and sealants for the building industry. The company currently operates production facilities in 27 countries on five continents.

For 125 years, H.B. Fuller has been a leading global adhesives provider focusing on perfecting adhesives, sealants and other specialty chemical products to improve products and lives. In early 2012, H.B. Fuller Co. completed the acquisition of the global industrial adhesives business of Forbo Group.

OMNOVA Solutions is a technology-based company that makes emulsion polymers, specialty chemicals, and decorative and functional surfaces for a variety of commercial, industrial, and residential end uses.

LORD is a diversified technology company with a long history of developing breakthrough adhesive, coating and motion management technologies that significantly improve the performance of its customers’ products.

MACtac is a global leader in the manufacture and supply of pressure-sensitive adhesives. With manufacturing and distribution facilities in 14 countries and a strong presence and base in North America, the company serves industries including labeling, graphic design, packaging, digital imaging, assembly engineering, solar, automotive assembly, medical device assembly, and more.

FLEXcon is a family-owned, private manufacturer of pressure-sensitive films and adhesives, headquartered in Spencer, MA.

Since its incorporation in 1981, Henry Co. has grown into a national supplier of air and vapor barrier, roofing, and waterproofing products. “We expect a slight increase in the construction sector in 2012, allowing for some growth,” says a company source.

Sika AG supplies the building, construction industry and manufacturing industries with products for sealing, bonding, damping, reinforcing, and protecting load-bearing structures. “2011 sales significantly exceeded that for 2010 in nearly all active market sectors,” says a Sika representative. “This was partly due to a return of customer confidence in the second half.  On the other hand, significant increases in raw material costs were only partly offset by price increases with the net result an erosion in margin. We remain cautiously optimistic for 2012.”

A division of Franklin International, this company manufactures adhesives for the domestic and global wood furniture, millwork, and engineered-lamination markets. It also provides pressure-sensitive adhesives for office products and food packaging, and specialty polymers to various companies to formulate or use them as fiberglass and non-woven binders.

Forbo Bonding Systems formulates and manufactures under the product brand Eurocol building and construction adhesives for floorings and tiles, as well as leveling compounds and grouts. In early 2012, H.B. Fuller Co. completed the acquisition of the global industrial adhesives business of Forbo Group. In April, H.B. Fuller announced plans to close the former Forbo corporate and research offices in Morrisville, NC, and has restructured its field sales and technical teams. These actions would eliminate approximately 40 positions in business management, Customer Service, Finance, Information Technology, Research and Development, and Sales. Selling, general and administrative positions that have not been eliminated will move to other H.B. Fuller locations, and the North Carolina offices were to be vacated by February 2013.

The Reynolds Co. is a manufacturer of water-based, hot-melt and dry-blended adhesives. The company also performs customized, contract or “toll” blending, as well as private labeling.

Daubert Chemical Co. has provided specialty coatings and adhesives since 1935. Serving the steel, automotive transportation and general manufacturing industries, Daubert has focused on corrosion prevention coatings, industrial anti-skid coatings, sound deadening coatings, and specialty adhesives, as well as concentrate formulations to service the aerosol packaging industry. According to a source at Daubert, “OEM housing market is flat and consumer DIY is strong, as are transportation capital equipment markets.”

Uniseal is a supplier of adhesive and sealant systems for automotive and industrial markets. The company’s product line contributes to all major automotive processes of assembly, including body, paint, and trim shop applications. According to a Uniseal source, the company “will grow sales with the automotive SAAR rate.” 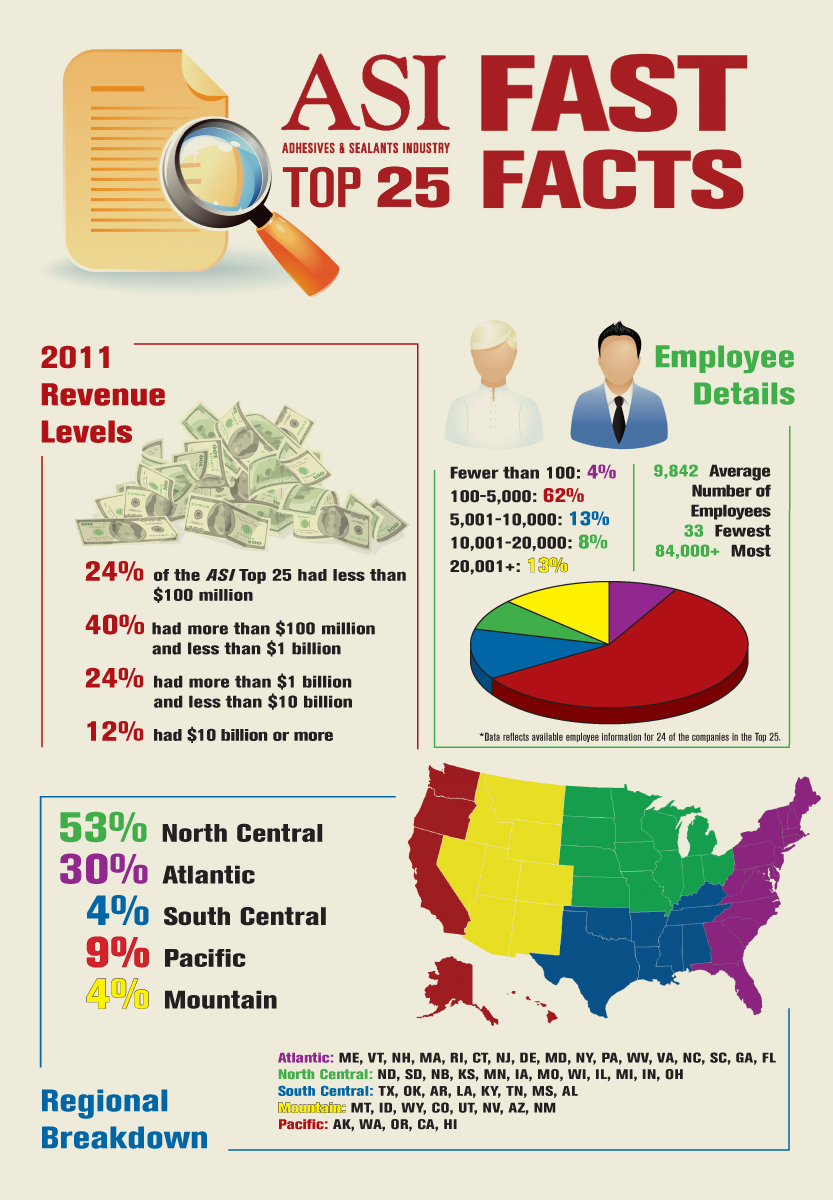