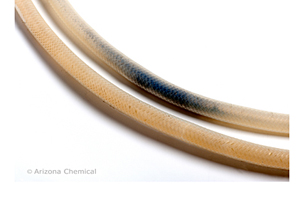 When EVA hot melts made with the tackifier are compared to those made with conventional rosin esters and hydrocarbon tackifiers, by oxidative DSC, color and viscosity change on aging, and rate of char formation during extended field trials, SYLVAPACK RE 100 RC reportedly provides a much more oxidatively stable product.