More manufacturing workers are now using their own mobile devices to monitor and control industrial equipment.

The bring-your-own-device (BYOD) phenomenon that is reshaping information technology (IT) in business offices now is spreading to the manufacturing sector, with employee-owned smartphones and media tablets playing an increasingly important role in manufacturing settings this year and beyond. Rising numbers of manufacturing workers are using their own smartphones and tablets to monitor and control industrial equipment. 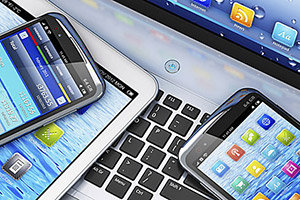 These devices can allow users to manage equipment remotely, observing processes while employees are on the move or working in another part of the factory. While the trend is now being driven by individuals, companies in the future are likely to accommodate this phenomenon by provisioning employees with ruggedized devices tailored to the rigors of the factory floor.

In many cases, such devices are augmenting the functions of industrial PCs. The global industrial PC market is expected to generate shipments of 4.1 million units in 2016, up from 2.5 million in 2012. The use of BYOD in manufacturing is expected to rise at a rapid rate in the coming years. However, because the movement is being driven by individuals and not at the corporate level, gauging the number of BYOD devices being used or to forecast the growth of the market is difficult. However, anecdotal research indicates the BYOD trend is expanding in the manufacturing realm.

The rise of BYOD is being enabled by the increasing networking of industrial automation equipment. A small percentage of this equipment uses standard wireless networking technology. For instance, wireless LAN (WLAN) has been the most widely adopted protocol in the industrial space. The technology is highly suitable for many applications because of its advances in the enterprise and consumer sectors, allowing knowledge and technology to filter into industrial applications.

Bluetooth is another protocol extensively used in the consumer space that is also popular for industrial automation networking. Bluetooth’s advantage lies in its ability to pair devices, providing greater security and reducing the potential for opportunistic hacking attacks. WirelessHART and ISA 100.11a are the two major “true” industrial wireless technologies. They compete directly and are more prevalent in process industries compared to WLAN and Bluetooth, which are more commonly used in discrete industries.

Such standard wireless networking technologies lend themselves to use with consumer mobile devices. While the penetration of wireless technology in industrial automation equipment remains low, the area holds big growth potential in the coming years.

In some cases, tablets are being mounted on the sides of machines to provide visualization and control of the manufacturing process. To support the use of mobile devices in manufacturing, leading industrial automation vendors are starting to show apps that work on iOS and Android devices. Many such apps were released in 2013, and more are expected. One example of a company working in this area is groov, which offers a system for building human-machine interfaces (HMI) for monitoring and controlling manufacturing automation systems. These HMIs can be accessed in a variety of devices, including tablets and smartphones.

Despite its usefulness in manufacturing, BYOD presents a range of challenges. Unlike industrial PCs, consumer mobile devices are not designed to endure the stresses commonly encountered in manufacturing, such as vibration, heat and water. As a result, manufacturing companies in the future may provide workers with tablets and smartphones that are rated for such environments.

There also are safety and security considerations related to BYOD in manufacturing. If a production line goes down because of a problem with a consumer mobile device, there could be huge implications in lost productivity and time. Even so, with the great usefulness and increased utilization of BYOD in the manufacturing realm, companies will be compelled to deal with these issues in 2014 and beyond.

The trend toward increasing networking of manufacturing is opening up factories to the benefits of flexible production using wireless, mobile communications. However, this trend to connected devices is also exposing production sites to security breaches and cyber-attacks, compelling companies to seek ways to protect their networks. Wireless network connections in global factories will rise from 2.1 million in 2012 to 3.4 million by 2017—an increase that also magnifies risk factors to manufacturing environments. In addition, BYOD may lack adequate security, offering hackers easy access to confidential data—or allowing them to spread malware through factory automation systems.

The issue of security in manufacturing networks became front-page news in 2010, when the Stuxnet computer worm afflicted industrial control systems in Iran. Stuxnet was designed to both subvert and engage in the surveillance of supervisory control and data acquisition systems made by Siemens. While Stuxnet is thought be an intelligence tool, other types of malware are designed simply to infect and cause damage to manufacturing systems. In some cases, hackers have engaged in blackmailing the manufacturing operations of companies, demanding a ransom in order to lift the malware from their systems.

To counter these threats, manufacturing operations are taking cyber-security measures. Among these is the “honeypot,” a site that masquerades as a manufacturing network but is actually an isolated system designed to divert and gather information about hackers.

The current level of adoption of BYOD and wireless in factory and process environments is low. Nonetheless, the technology’s presence is expanding, bringing both benefits—as well as increased risks from hackers—to the manufacturing market.

Mark Watson is Associate Director at Industrial Automation Group, IHS.
You must login or register in order to post a comment.