This website requires certain cookies to work and uses other cookies to help you have the best experience. By visiting this website, certain cookies have already been set, which you may delete and block. By closing this message or continuing to use our site, you agree to the use of cookies. Visit our updated privacy and cookie policy to learn more.
Home » Can you explain the chemistry behind polyurethane dispersions?
Adhesives and Sealants TopicsFinished Adhesives and SealantsRaw Materials and Chemicals
Q&A About Polyurethanes

Can you explain the chemistry behind polyurethane dispersions?

Solventborne polyurethane adhesives have been used for over 50 years. They have a long history of producing high-strength, durable bonds, and can be used on a range of substrates. As industrial hygiene concerns in the workplace have grown, an effort has been made to eliminate solvents when possible. Polyurethane dispersions have been developed that have excellent adhesion performance and effectively address the safety aspects raised by the use of solvents.

The backbone of a polyurethane dispersion will have the same basic composition as the solvent-based polymers, but will contain hydrophilic groups that allow the polymer to be dispersed in water. The dispersed particles consist of a hydrophobic core surrounded by a hydrophilic shell composed of ionic groups and/or long-chain hydrophilic nonionic groups. In contrast to other types of dispersions, polyurethane dispersions most often contain only internal emulsifying groups, meaning they are built into the polymer backbone. Other dispersions, such as polychloroprenes, are stabilized by the addition of external emulsifiers. Ionic or nonionic surfactants that are not chemically attached to the polyurethane polymer could migrate out of the adhesive and lead to bond failures.

Typical hydrophilic groups are shown below: 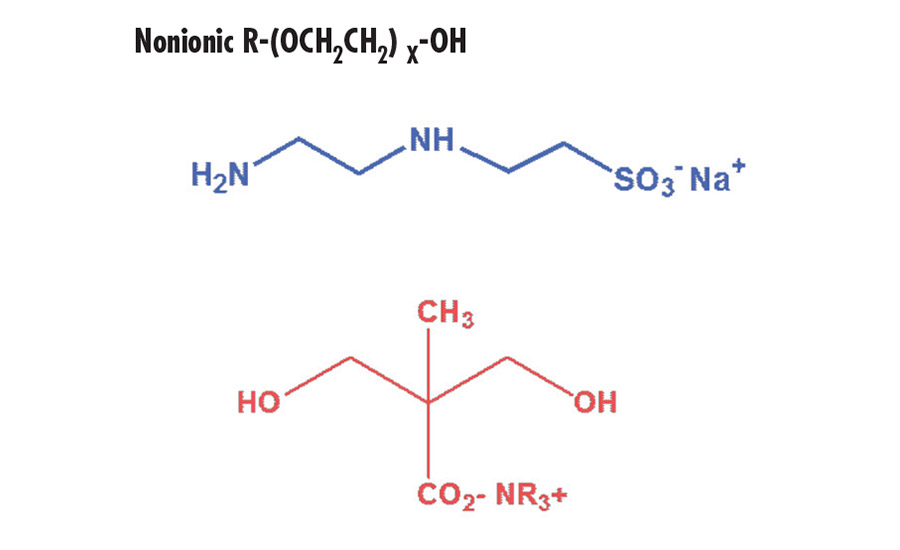 Dispersions containing sulfonate groups have a pH value of approximately 7 and are stable at both higher and lower pH values. This allows for significant formulating flexibility when blending with other polymers. In contrast, carboxylate stabilized dispersions have a higher pH
(> 8). They are unstable at lower pH values, which limit formulating options. Nonionic compounds containing multiple segments of polyethylene oxide can also be used as hydrophilic modifiers.

To develop the best properties of the adhesive, it is often recommended to use the dispersion in conjunction with a crosslinker. Water-dispersible polyisocyanates are a popular class of crosslinkers. They will react with hydroxyl groups on the polymer backbone and increase the polymer’s molecular weight and crosslink density. Polycarbodiimide crosslinkers are used to cure polyurethane dispersions containing carboxyl functionality.

Having a good understanding of the chemistry behind an adhesive is extremely useful for formulating a product with high performance.

Author's Note: I have retired from Covestro LLC, and this will be my last column in ASI magazine. Thank you for your interest in polyurethane chemistry over the past eight years. I hope you will continue to develop high-performance adhesives based on polyurethane chemistry. My current email address is jdor_adh@outlook.com.

What type of raw materials should be considered in formulating products with a bio-based focus?

What types of surface preparation are necessary to obtain strong and durable bonds?

Jeffrey F. Dormish, Ph.D., holds the position of Research Fellow and is responsible for the development of new polyurethane adhesive applications, with a focus on waterborne raw materials.

Dr. Dormish joined Covestro LLC (then known as Bayer) in 1980. Since that time, he has held various research and application development positions of increasing responsibility, and worked in polyurethane research at Bayer AG in Germany for two years. He has a bachelor’s degree in chemistry from the University of Dayton and a doctorate in chemistry from the Pennsylvania State University. For additional information on the topics addressed or to ask another question, email jeff.dormish@covestro.com with the subject line “Polyurethanes Q&A.”