The selection and control of the physical properties of minerals are critical in improving an adhesive’s performance. 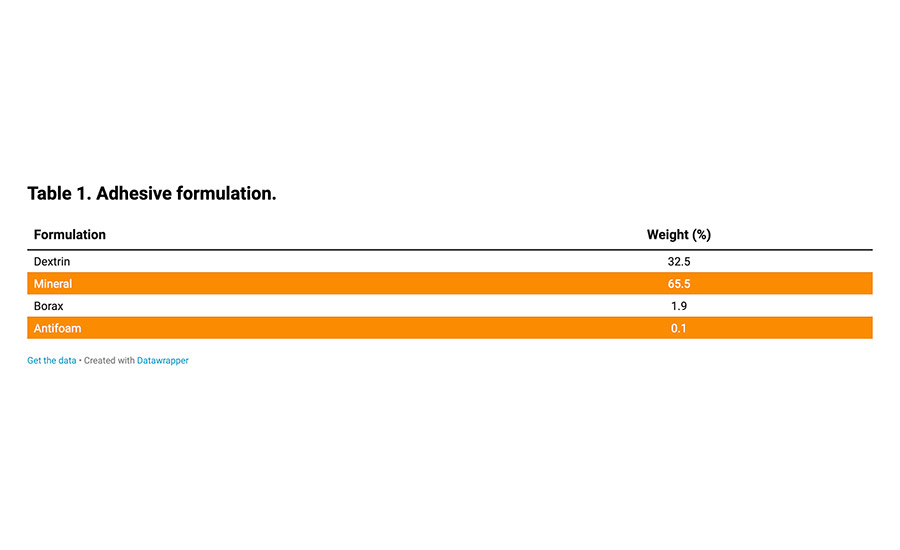 Water-based adhesives for paper lamination are typically formulated with different types of binders, including: natural polymers (e.g., dextrins and starches), inorganic “polymers” (e.g., sodium silicates), and oil derivative-based polymers (e.g., polyvinyl alcohol and polyvinyl acetate). These adhesives may be formulated as “ready-to-mix” dry powder blends or “ready-to-use” wet blends. Both blend types require the addition of water to achieve the correct viscosity prior to application. 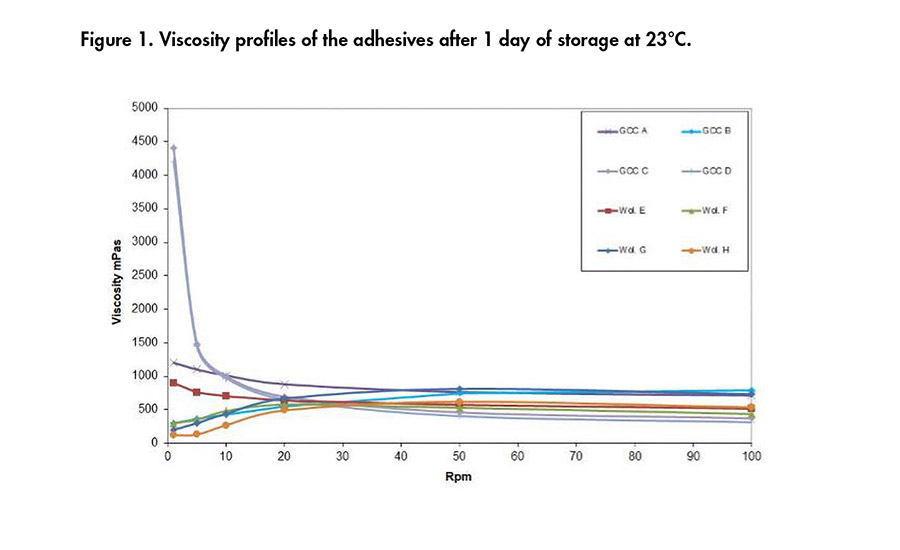 Figure 1. Viscosity profiles of the adhesives after 1 day of storage at 23°C.

One of the major advantages of the ready-to-mix adhesive types is the absence of organic solvents, which leads to low levels of volatile organic compounds (VOC) and the reduction of fire hazards during compounding. Another feature of these adhesive types is their controlled water solubility, allowing easy equipment cleaning. It is not surprising that these materials have found wide use in bonding porous paper substrates.

In dextrin paper adhesives, the mineral component can represent over 50 wt% of a commercial formulation. The choice of mineral will therefore have an impact on the ultimate performance of the adhesive in terms of its stability, rheology, and adhesion properties. 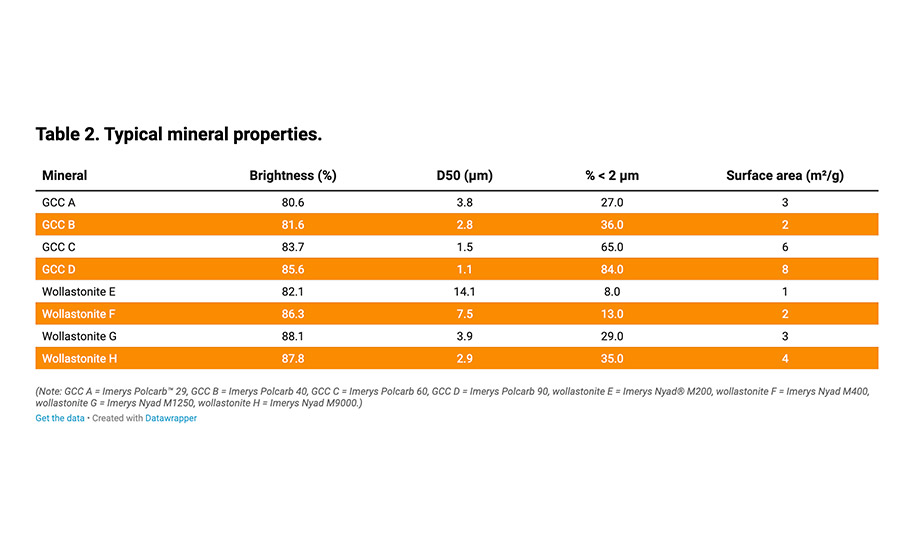 A variety of mineral types can be used in adhesives for applications including wood bonding, packaging, and textile bonding. Ground calcium carbonates (GCCs, CaCO3) are often chosen to modify rheological and adhesion properties to address the correct cost/performance ratio applicable for the relevant application. Maximizing the inorganic content and minimizing the organic binder and the water content is a common trend in such compounds. 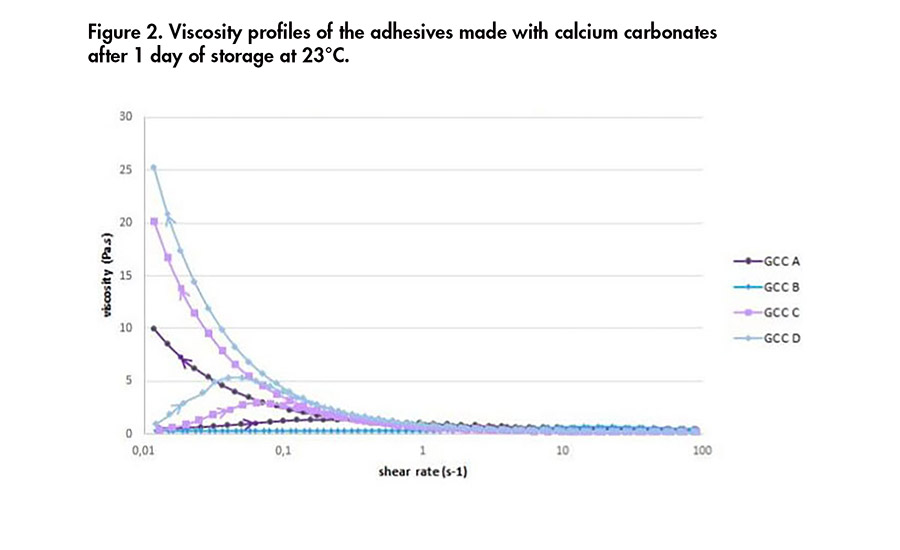 Figure 2. Viscosity profiles of the adhesives made with calcium carbonates after 1 day of storage at 23°C.

Other types of minerals can also be considered for this application, including wollastonites (CaSiO3), which are acicular-shaped calcium silicates. The potential benefit of wollastonite is its reinforcing acicular shape and low oil absorption figure, comparable with GCC.1

The evaluation of GCCs and wollastonites has been undertaken in a water-based adhesive dry-blend formulation, as described in Table 1. All adhesive mixes were carried out in a Heidolph mixer; 55 parts of water were stirred at 4,000 rpm with a Cowles blade (3-cm diameter), and 100 parts of dry-blend mix was added under stirring. Once the adhesives had been mixed for the required time, they were cooled to 23°C.

The viscosity of the adhesives was measured using a Brookfield viscometer (20 rpm at 23°C). Additional water was then added in increments until the viscosity was between 500 and 800 mPa.s. Brookfield viscosity measurements were made after each addition of water. Solids contents were measured after the final water addition. The rheological properties of the mixes were also measured after 1 week at 23°C, using a Kinexus Pro rheometer with an upward shear rate ramp and a downward ramp (CP 4/40 mobile). 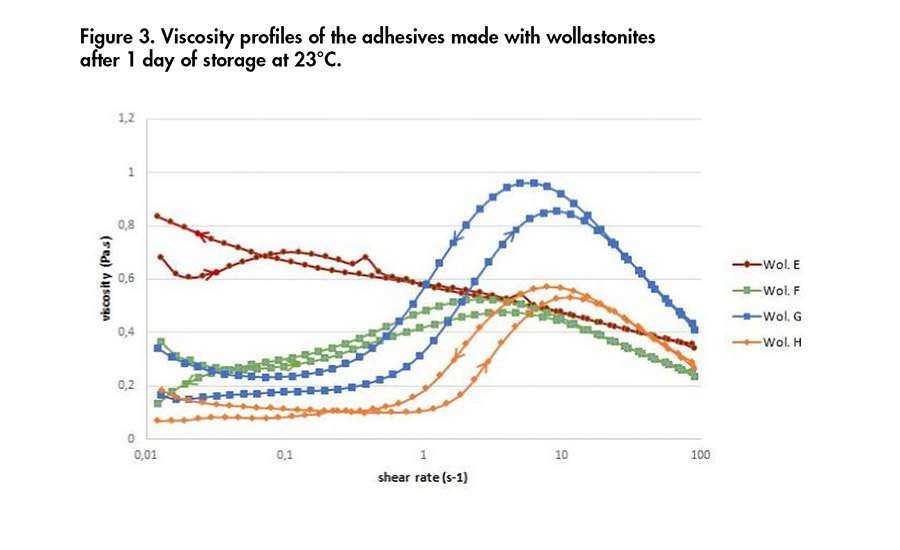 Figure 3. Viscosity profiles of the adhesives made with wollastonites after 1 day of storage at 23°C. 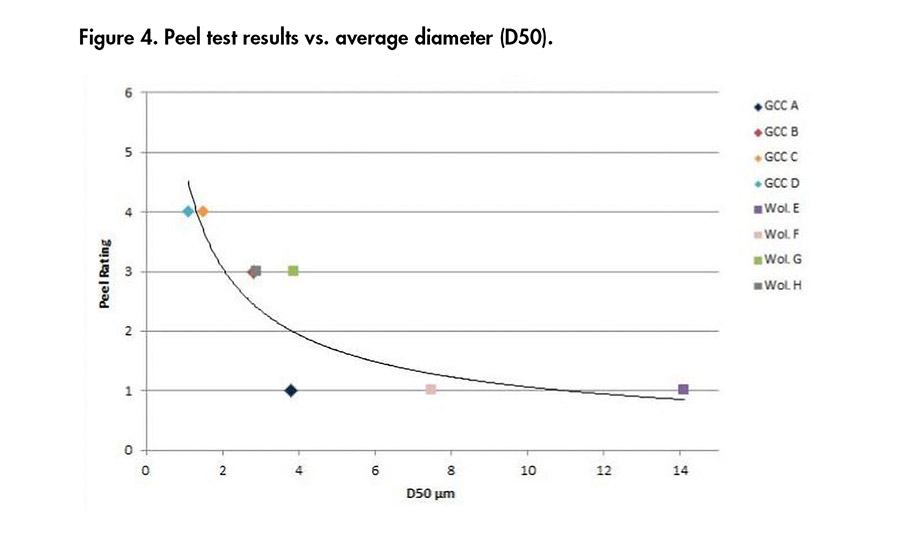 Adhesion properties were evaluated with a peel test. Adhesives were heated to 80°C and applied on a piece of unbleached paper with a 60 µ bar in order to reach ~ 80 g/m2 coating. Another paper of the same size was placed on top of the glued paper, and then a 3-kg weight was placed on the two pieces of paper for 10 seconds. The weight was removed, and the papers peeled apart after 5 seconds. A rating was given for each mix, from 1 to 5, with 1 being the worst adhesion (100% adhesive failure) and 5 being the best (100% cohesive failure).

The mineral components of the formulation presented in Table 2 were varied to incorporate combinations of fine- and medium-sized GCC (d50 between 1 and 4 µm) and wollastonite. Table 3 gives details of the normalized solids for a Brookfield viscosity of 600 mPa.s. It shows that coarser grades allowed a higher filler loading. 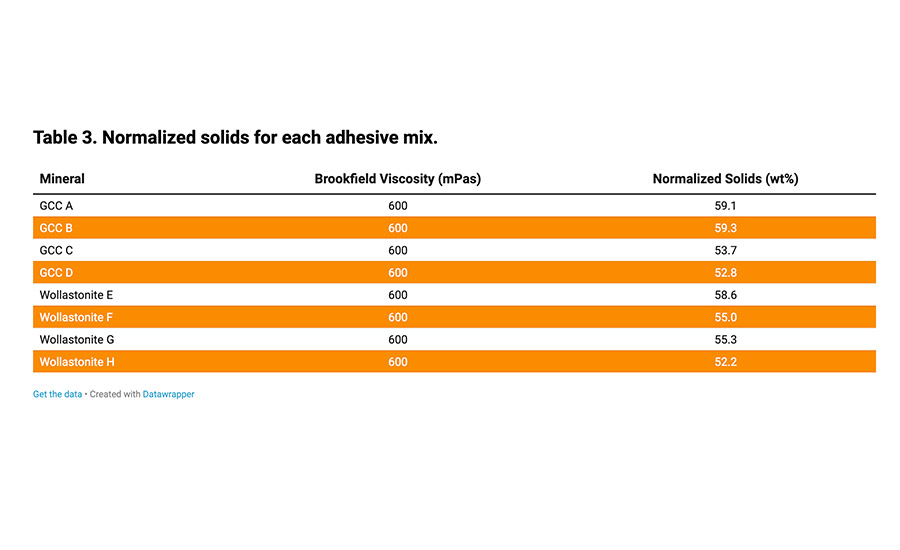 For three of the adhesives containing wollastonite, the viscosity tends to increase until a shear rate of 10 s-1 is reached, and then it decreases. This is also valid with the shear rate decreasing. This specific rheological profile is likely to be linked to its needle structure. 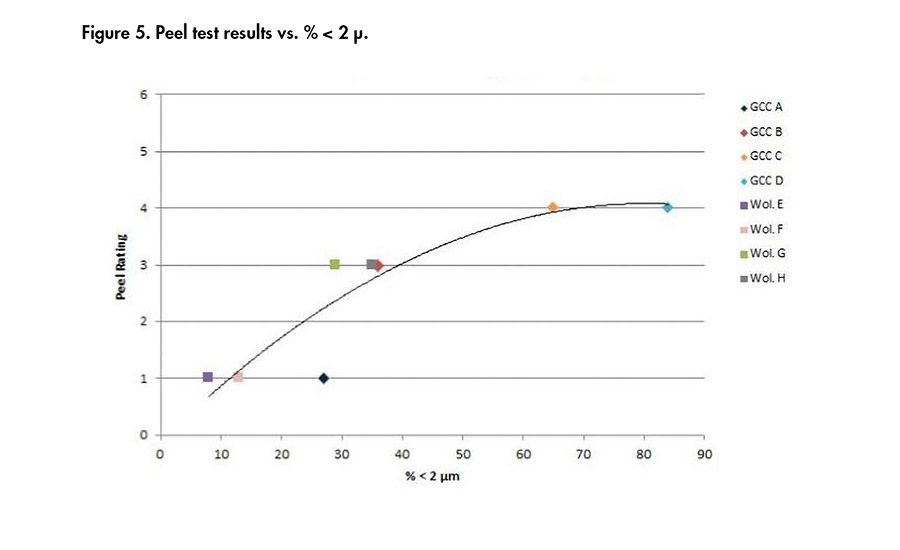 Finally, the peel test results obtained on the different mixes are presented in Table 4. Depending on the mineral used and its granulometry, differences could be observed on the peel ratings.

Figures 4-6 present the correlations obtained between the minerals properties and the peel ratings. It can be concluded from these results that the finer the product (i.e., low d50, high percentage above 2 µm, high surface area), the better the adhesion results, whatever the chemistry of the mineral used. Then, at a similar D50 of 4 µm, the wollastonite G gave better adhesion than GCC A. 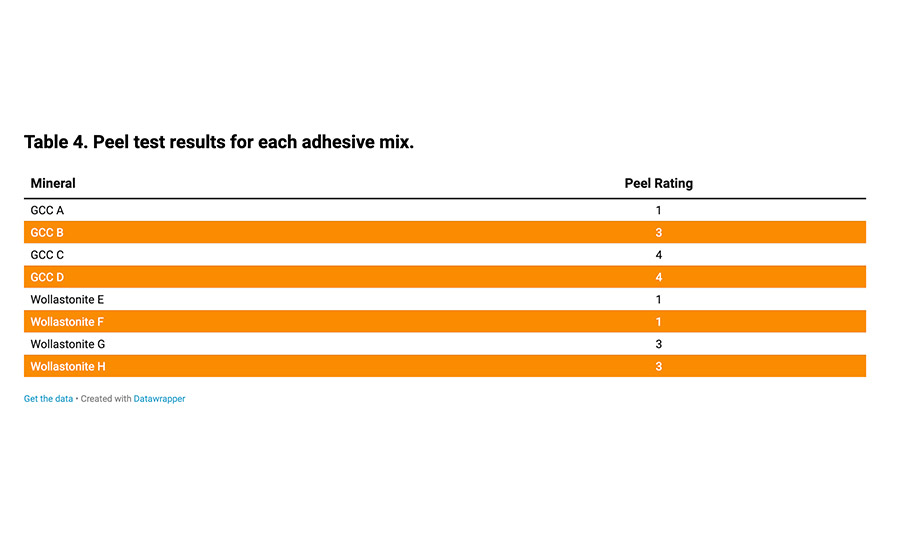 In water-based adhesives, the use of wollastonites gave linear Brookfield viscosities and a specific rheological profile under increasing and decreasing shear rates, which is morphology related. The finest grades also enabled good adhesion performance.

In dextrin adhesives for tube winding in particular, GCC C, GCC D, or 50/50 blends are recommended to achieve an optimum performance on adhesion and solids content on test liner and kraft liner paper substrates. GCC A and GCC B, which are coarser, increase the solid content but reduce adhesion and might create premature particle sedimentation. 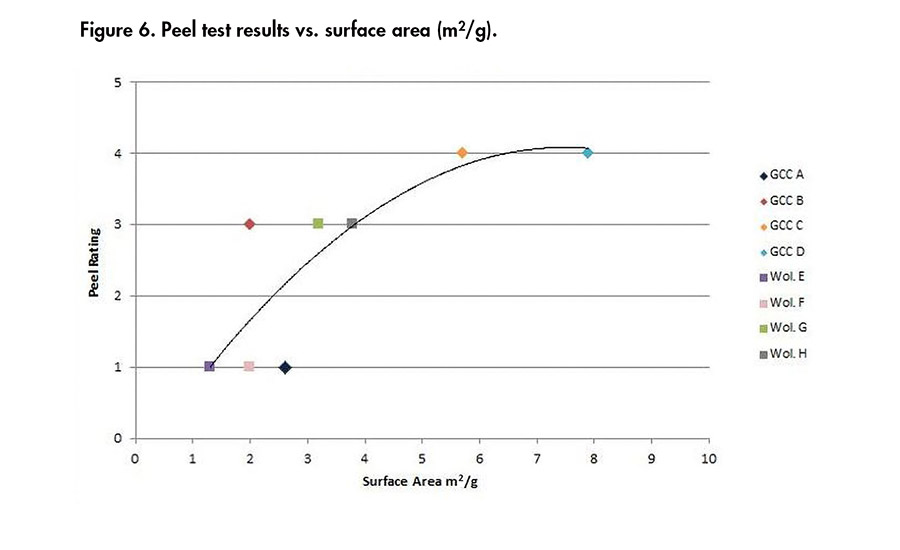 Wollastonite G and H, due to their acicular shape and particle size, are the most interesting wollastonites to reinforce a paper-adhesive multilayer composite. Reinforcement is potentially achieved by substituting part or the total amount of GCC by wollastonite G or H. Further work is being carried out to characterize a broader range of industrial minerals in other adhesive types.

Note: Opening image courtesy of faegga via iStock/Getty Images Plus.

Shamila Grigorieff is a Senior Scientist with Imerys Performance Minerals.

Jane Trewolla is a Senior Scientist for Imerys Performance Minerals.