The manufacture of solvent-based adhesives and sealants brings a higher risk of flammable/combustible situations, but tank blanketing can prevent hazards from developing.

If you’re a process engineer, manufacturer, or health and safety officer, you know that oxygen detection plays a key role in process safety and product quality. This is especially true when deployed in the production processes for adhesives and sealants manufacturing. Having too much oxygen in solvent storage tanks poses a significant risk of fire and explosion. In addition, too much oxygen within mixing vessels creates a risk of fire and explosion while also posing a risk to product quality.

The manufacture of solvent-based adhesives and sealants brings a higher risk of flammable/combustible situations. For a fire to start, three elements must be present. First, some type of fuel must be available. In this case, the fuel consists of the solvent used in the production process. Second, the presence of oxygen is needed to oxidize the fuel. Finally, an ignition source must kick-start the oxidation process in the form of a spark, a heated surface, or anything else that can supply the energy to initiate the chemical reaction. These three elements are commonly referred to as the fire triangle.

Since all three elements are needed for a fire, it is only necessary to remove one of the elements; the other two by themselves will not be able to complete the reaction. Once the fire has started, though, the reaction will be self-sufficient as long as there is sufficient fuel and oxygen available. This means that there is no need for an external heat source, since the flames themselves serve that function. The goal is therefore to stop a fire before it happens.

In order to control the level of oxygen, it is important to provide a means of detection as well as a way of replacing the oxygen with an inerting substance. In the case of adhesive and sealant manufacturing, tank blanketing works to prevent the hazardous situation from developing (not just to reduce the catastrophic consequences after the operation has had a fire or explosion).

A number of devices are available that help reduce the impacts and spread of a fire or explosion, including flame arresters, backflow preventers, or even sprinklers. Blanketing works well before that point has been reached, however, adding a layer of safety.

By introducing enough inert gas, the oxygen will be forced down to a level where combustion is no longer possible. That point is defined as the limiting oxygen concentration (LOC). It is a measurement of the amount of oxygen below which combustion is not possible regardless of the amount of fuel. If the atmosphere around a potential fuel is kept below the LOC, no flammability is theoretically possible.

Some formulations contain inhibitors to prevent polymerization, and they require some oxygen to be present to work. In applications where there is a flammability risk and nitrogen must be used, too much nitrogen is not a good thing. If the nitrogen dilutes or displaces too much of the oxygen, the inhibitor stops working. However, having too much oxygen presents a flammability risk.

Compliance and legislation surrounding the safe storage of solvents within a solvent tank farm is understandably strict. Regulations such as the National Fire Protection Association’s “Standard on Explosion Prevention Systems,”1 the American Petroleum Institute’s “API 2000: Venting Atmospheric and Low-Pressure Storage Tanks,”2 and the International Organization for Standardization’s “ISO 28300:2008: Petroleum, Petrochemical and Natural Gas Industries—Venting of Atmospheric and Low Pressure Storage Tanks”3 all relate closely to flammability control and effective design. 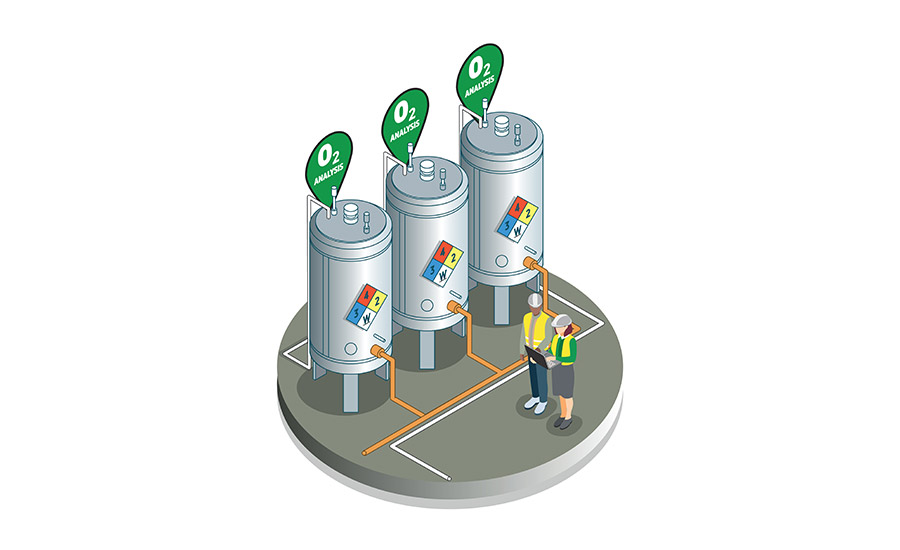 As previously explained, one useful method for controlling the level of oxygen in solvent tank farms is to initially provide a means of oxygen detection and, secondly, to provide a way of replacing the oxygen with an inerting substance. Tank blanketing works to prevent the hazardous situation from developing.

Nitrogen generators separate ordinary air into the two major constituents: oxygen and nitrogen. If the nitrogen is being used for purging vessels, a breakdown or malfunction of the generator could result in air being supplied to the vessels. 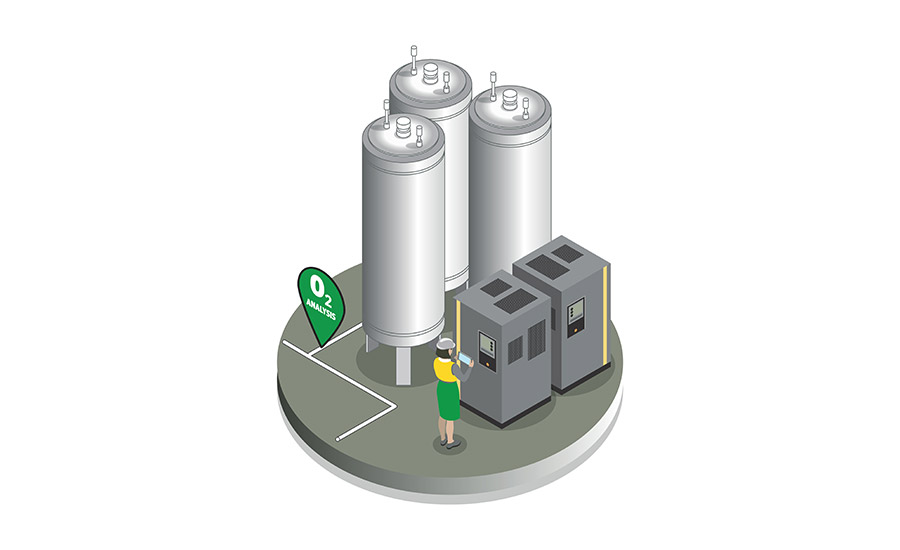 A bulk liquid nitrogen tank with an evaporator is commonly used when high volumes of nitrogen are required or when a higher purity of nitrogen is needed. The liquid is vaporized back to a gas state prior to use in the plant.

Refilling the liquid tank is done by a third party, and while unlikely, it is possible for liquefied oxygen to be delivered instead of nitrogen. Verification of oxygen concentration from either nitrogen source is important to ensure safety or validate purity where product quality may be affected.

The mixing vessel incorporates the raw materials such as the solvent from the solvent tank farms and additives like rubber, resin, or solids/fillers. For optimum product quality, it is important to understand any oxidation processes that may occur in terms of the materials involved. 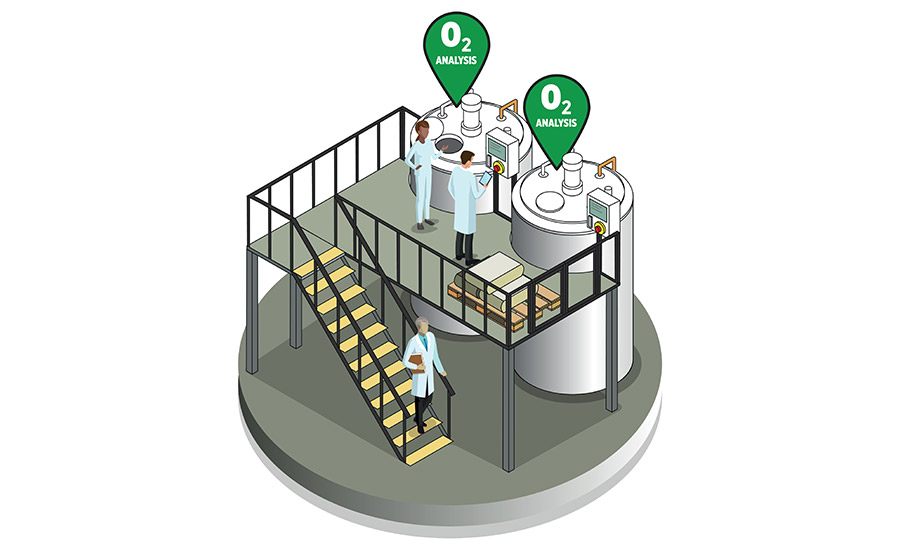 Charging of raw materials is frequently the highest risk step when manufacturing adhesives. The dumping of powders or free-falling solvent can generate static charges that have the potential to create a static spark capable of igniting any combustible materials that are present. The charging step often requires the introduction of materials through what is commonly referred to as open-hatch loading. This step places the operator at a greater risk if a static spark causes a flash fire or explosion.

Sampling systems should be designed to ensure that the oxygen sensors always have a continuous clean, dry sample gas for accurate measurement. The sensors require a contaminant-free sample stream to deliver reliable results. As a result, the sample conditioning systems need to be built to withstand specific processing conditions, including solvents and corrosive chemicals that can present significant challenges. Understanding more about your process and the raw materials that you are using will help you develop a system that provides reliable real-time continuous oxygen monitoring.

For powder processing and handling systems, the preconditioning components should be designed to remove dust and fine particles from the sample stream, preventing contamination or damage to the oxygen sensor and sampling system components. Again, a good understanding of the process and the raw materials that are used will create a solid basis for the design of a system built for reliable real-time O2 monitoring.

The application process dictates the oxygen level that needs to be maintained. If the objective is to improve process safety, it is important to identify the target LOC value. As previously mentioned, the LOC is the concentration of oxidant in a fuel-oxidant-diluent mixture below which a deflagration cannot occur under specified conditions.

The NFPA 69 Standard on Explosion Prevention includes examples of LOC values for flammable gases and combustible dusts. Paragraph 7.7.2.5 in NFPA 69 requires one of the following: a safety margin of at least 2 vol% below the worst credible-case LOC shall be maintained; the LOC shall be less than 5%, in which case the equipment shall be operated at no more than 60% of the LOC.

It is worth noting that the standard takes into consideration whether or not the oxygen concentration is continuously being monitored. When it is not monitored and controlled with safety interlocks, the required safety margin is increased to 4.5 vol% for LOCs greater than 7.5%. If the LOC is below 7.5%, the standard requires operating at no more than 40% of the LOC value. NFPA 69 includes reference tables with LOC values for common flammable gases and combustible dusts.

Blanketing the head-space above the product level in a tank or vessel goes a long way to preventing a reduction in the stability of a product that is affected by exposure to oxygen and moisture. Such exposure can degrade the product, allow unwanted polymerization reactions, or cause surface defects in molded products. Knowing how much O2 is present and having control of the flow of inert gas to the process enables adhesives and sealants manufacturers to greatly improve product quality and maintain tight control of the manufacturing process.

Nitrogen blanketing offers significant benefits for adhesive and sealant manufacturing in terms of process safety. When implemented well, it has also been found to improve efficiency, effectiveness, and cost. Production elements such as the different storage areas within the process (e.g., the solvent tank storage areas), the quality of the nitrogen supply, and the mixing vessels can all benefit from oxygen analysis and sample conditioning packages for mixing vessel preparations.

For more information, contact the author at (484) 713-1612 or bill.carlson@msasafety.com, or visit www.mybacharach.com.