Whether you are into social networking or not, its popularity cannot be denied. In October 2012, Facebook hit one billion active users. Twitter has more than 200 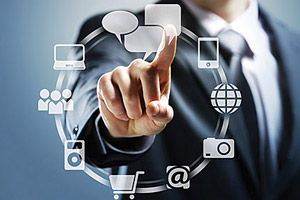 million active users who send a billion tweets a week. Clearly, more and more companies are turning to social networking sites to advertise their products and services, deliver messages, and improve customer service.

While social networking sites offer companies the means to communicate directly with millions of people, they also offer individuals the same power. Combine that with the higher degree of anonymity available to people operating on the Internet, and individuals have an enormous ability to affect the fortunes and reputations of companies.

The single greatest threat of social networking sites is the ability to quickly disseminate destructive information about a company to a huge number of people. It is easy to see how this could come from either employees or customers. One example involves an infamous video from two (now former) employees of Domino’s Pizza. The employees took a video camera into their store kitchen and filmed themselves performing disgusting and unsanitary acts to food products, which they then sold to customers.

The video went “viral” and was viewed millions of times; it is still viewable today on YouTube. Domino’s corporate executives later conservatively estimated that the video cost them 1-2% of their yearly sales—about $37 million. All from two reckless employees who gained nothing other than brief notoriety.

For many companies, this type of risk can come from clients as well as employees. Consider the example of Southwest Airlines and movie director Kevin Smith. Southwest removed Smith from a flight, claiming that he was too large to fit into one seat. Smith, who at the time had more than 1.5 million Twitter followers, tweeted relentlessly, causing Southwest embarrassment, time and potentially millions in revenue. Such incidents are certainly among the most worrying risks of social networking sites, but they are by no means the only ones.

The term “social networking” is itself misleading. Businesses have increasingly turned social networking sites into another medium of advertising space. These days, a new movie not only has a website, it also has a Facebook page and Twitter handle. Just as companies have begun to blur the lines between business and personal use for these new media, employees have begun to do the same.

Of course, companies should ensure that all advertising meets appropriate standards, such as clarity and truthfulness. Unlike traditional advertising, social media facilitates a different type of misleading advertising: the ability to hide a comment’s origin. Companies should avoid creating posts, fan pages or any online presence that a reasonable person might infer is from a client.

As if the risks of social networking sites weren’t great enough, they pose a unique problem for employers. Social media risks are not limited to working time; they can also present risks while an employee is “off the clock.” Employees can just as easily post disparaging comments about their company from the comfort of their living room as they can from their cubicle.

Such vulnerabilities make an outright ban on employee use of social networking sites impractical. Supervisors and employers must focus their efforts not on controlling access to these sites but on controlling the messages put out on them by their employees and non-employees. However, when seeking to control these messages, employers can run into significant legal issues.

It used to be that workers complained about their jobs with friends and family. Now, many of them take to social media and other sites to voice their frustrations. When employees rant publicly online about their bosses and coworkers, many employers may assume they have the right to terminate those employees. However, the National Labor Relations Board (NLRB) has been increasingly targeting companies that fire workers for their comments on personal social media sites, arguing that some comments represent protected activity under the National Labor Relations Act.

For example, in December 2012, the NLRB ruled that Facebook postings by an employee of a nonprofit organization criticizing their working conditions and stating the employees of the nonprofit company did not help the clients’ needs enough were protected activity under the National Labor Relations Act. Accordingly, the NLRB found that the company had unlawfully discharged the employee for their posts.

In January of this year, the D.C. circuit ruled that President Obama’s appointments to the NLRB were unconstitutional, which may essentially shut down the NLRB until an expected Supreme Court review occurs. However, the views the NLRB has taken on social media policies reflect the ideology of the current administration, and employers should take care when disciplining employees for speaking out online about working conditions.

Along with the social media activities of current employees, companies must also be careful about how they consider the social media activity of potential workers. It has become commonplace for many companies to Google job applicants to find out aspects of their personalities and habits that do not necessarily appear on applications or resumes. While employers certainly can view and evaluate public Facebook postings, tweets, and the like, they need to be careful how they research job applicants and how they use the information they find.

In addition, companies need to do the research themselves. Hiring a third party can trigger the jurisdiction of the Fair Credit Reporting Act (FCRA). Under the FCRA, using a third party to look at social media activities could be illegal without the applicant’s permission.

It is also important to respect would-be employees’ privacy settings. Many people restrict their Facebook information to confirmed “friends.” Trying to view information that is not available to the general public could put employers at risk of a privacy lawsuit.

If they do get access to applicants’ social media postings, employers need to be thoughtful about how they factor those into the hiring process. Federal regulations such as Title VII of the Civil Rights Act, the Age Discrimination in Employment Act and the Americans with Disabilities Act prohibit discrimination based on a variety of factors, including race, color, religion, national origin, gender, age and disabilities. Under the Genetic Information Nondiscrimination Act, employers cannot acquire genetic information about applicants.

The first step in insulating your company from Facebook and Twitter problems is developing a company social networking policy. The policy does two things: it tells your employees that you know all about social networks and that you take what happens on those sites seriously, and it gives your employees guidance on what is expected of them.

Start by reminding your employees that you are paying attention to what is posted. That alone will deter many employees from making irresponsible comments. Provide guidelines on what kinds of comments that are prohibited. For example, they shouldn’t reveal intimate details of the new advertising campaign or the world-beating new product the company is about to release.

The social media policy should be specific to your industry and business, however, and should include examples of prohibited comments, such as harassing or disparaging comments based on race, sex, or disabilities. This will help ensure that your policy survives the increased NLRB scrutiny, because many disparaging comments may be considered protected activity if they touch upon the terms and conditions of employment.

The Internet is Forever

Remind your employees that what they post on the Internet lasts forever. Whatever they write will be available for viewing for all time. Not only will it always be viewable, but everyone will always know that they posted it. Even on sites where it appears that a person posted anonymously, their IP address may tracked by the Internet service provider.

Larger companies should consider establishing a social media team. One of the truest lessons of the information age is that the way in which information is transmitted changes quickly, while the response of legal and regulatory institutions is slow. A designated team can monitor changes in technology, stay on top of the latest sites and advise management of new developments. A good team should meet on a regular basis and should include representatives of the IT department, human resources, the legal department, and a few younger and tech-savvy employees.

Another key role for the social media team should be to monitor the company’s reputation on the web. Setting up a Google alert, for example, will help alert a company early on when something is being said about it. Team members should also conduct regular checks of YouTube, Instagram and other popular social media sites for any mention of the company. Who knows, you might even find something positive being said that you will want to publish to a wider audience.

One of the first things Domino’s did when its employees released that video was to release a response on its own sites. Southwest did the same thing on its blog. These responses allowed the companies to get their own message out there early in the news cycle.

A well-designed social networking site can also serve as an excellent recruiting or marketing tool. If the company needs to get a message out—to announce, for example, a temporary facility closure due to inclement weather—posting the message on a company Facebook page or Twitter feed will reach a lot of employees and customers.

Before launching a site, consider what your peers are doing and how you might develop a site that is helpful but not intrusive. Social networking sites are generally free, but someone who is tech-savvy should be specifically designated to oversee the site on a regular basis. A badly managed presence may be worse than none at all.

The only thing Web 2.0 really means is that there is going to be a Web 3.0, and no one really knows what that will be either. As the ability to transmit information becomes faster and more personal, companies must develop the flexibility to respond to both the challenges and opportunities of information technology. A company prepared only for today is outdated by tomorrow.

For additional information, contact the author at (281) 833-2200 or ralaniz@alaniz-schraeder.com.

Richard D. Alaniz is senior partner at Alaniz and Schraeder, a national labor and employment firm based in Houston. He has been at the forefront of labor and employment law for over 30 years, including stints with the U.S. Department of Labor and the National Labor Relations Board. Rick is a prolific writer on labor and employment law, and conducts frequent seminars to client companies and trade associations across the country. Questions or comments can be addressed to Rick at (281) 833-2200 or via e-mail at ralaniz@alaniz-schraeder.com .
You must login or register in order to post a comment.