Negative health effects caused by formaldehyde can be avoided through safe ventilation practices and detection instruments. 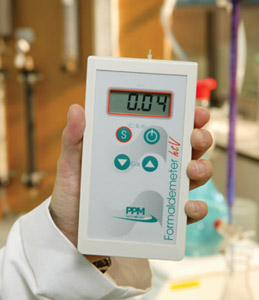 in woodworking, especially in veneer and lamination work. It is known for open working time, rigidity and moisture resistance.

Formaldehyde resins are traditionally used in the wood panel industry. Both particleboard and medium-density fiberboard (MDF) generally use urea-formaldehyde (UF) resins. Decorative plywood and veneered composites can also use resins; these interior applications are often found in paneling, cabinets or furniture.

Anyone involved in the manufacture of any of these products could be exposed to formaldehyde in the air. Unless due care and attention is paid, formaldehyde emissions from the production of those other panels can reach dangerous levels at production lines, especially in areas such as resin preparation and use, forming and hot pressing. Ventilation in these facilities must therefore be good; it is advised to sample airborne levels of formaldehyde regularly to ensure workers aren’t at risk of overexposure.

Formaldehyde is highly toxic to humans, regardless of the intake method. Even short-term exposure to formaldehyde irritates the eyes, causing pain, redness, blurred vision and severe watering. It can irritate the nose and throat, causing sneezing, soreness, coughing, shortness of breath, headaches, and nausea.

Exposure to elevated levels can lead to the accumulation of fluid in the lungs (pulmonary edema). A large exposure to formaldehyde is converted to formic acid in the body, leading to a rise in blood acidity, rapid or shallow breathing, hypothermia, and coma or death. Long-term exposure causes chronically impaired lung function, skin hardening, swelling and flaking, dermatitis, allergic eczema, and cancer.

Formaldehyde is a skin and respiratory sensitizer. Because it is a sensitizing agent, it can stimulate the body’s immune response so that a subsequent exposure to even a very small amount is likely to trigger an allergic response. Formaldehyde has also been shown to cause sleep disturbance, impaired memory, reduced concentration, nausea and menstrual irregularity. It is estimated that 10-20% of the U.S. population, including asthmatics, may have hyper-reactive airways, which may make them more susceptible to formaldehyde effects.

The International Agency for Research on Cancer (IARC), which is part of the World Health Organization, has designated formaldehyde as a known cause of several types of throat and nasal cancer. In June 2011, the U.S. National Toxicology Program has described formaldehyde as “known to be a human carcinogen.” The report prepared for the Secretary of the Department of Health and Human Services (HHS) contained warnings from scientists that people with higher exposure to formaldehyde are more at risk for nasopharyngeal cancer, myeloid leukemia and other forms of cancers.

In the UK, formaldehyde has been assigned a maximum exposure limit (MEL) of two parts per million (ppm). In the U.S., the Occupational Safety and Health Administration (OSHA) has set a permissible exposure level of 0.75 ppm. In Sweden and Germany, the maximum permissible indoor level is 0.1 ppm. Many other nations have similar exposure level regulations in place.

In buildings and facilities where formaldehyde is used, it is important that formaldehyde levels are regularly monitored. In order to ensure employees are not exposed to dangerous concentrations of formaldehyde in the air, it is advisable to detect and monitor levels with a suitable detection instrument. Real-time results mean that potential overexposures can be identified as they occur, without the delay of laboratory analysis. If a dangerous level is detected, employees can be evacuated until the risk is reduced.