PPG recently announced that the PPG Industries Foundation has donated $15,000 to the Air Force Museum Foundation for construction of a fourth major building at the 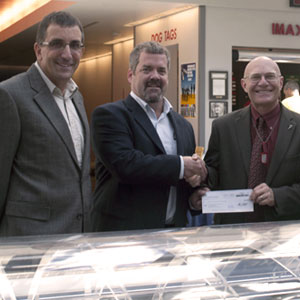 National Museum of the United States Air Force, located at Wright-Patterson Air Force Base near Dayton, Ohio. The grant was made on behalf of the company’s Aerospace business, and includes an application support center in Indianapolis.

“We are extremely grateful to PPG for supporting the expansion of this national treasure,” said Lt. Gen. (Ret.) Richard V. Reynolds, chairman of the Air Force Museum Foundation Board of Managers. “In addition to helping the museum better tell the story of the Air Force’s contributions to peace and security around the globe, the expansion will include exciting new educational exhibits and programs to help address the deficit in our nation’s science, technology, engineering and mathematics (STEM) workforce. PPG’s tremendous generosity will have a positive impact for many generations to come, and we are proud to recognize them for that.”

The new LEED®silver-certified building will feature four galleries illustrating the U.S. Air Force’s contribution to the space program, its role in transporting the president and other leaders, its contribution to global airlift missions, and research and development aircraft such as the XB-70, Valkyrie. The building, scheduled to open in 2015, also will host specialty tours, demonstrations and hands-on educational programs for visitors of all ages.