Rubber-based hot melts show great promise for a wide range of applications in both tapes and labels.

The choice of elastomers based on styrene block copolymer (SBC) technology for tapes and labels has traditionally been split between solvent and hot-melt systems. The overall footprint requirements for hot melts make them a preferred choice for new operations having on average one-quarter the line length of a solvent-based system.1 There is also no requirement for drying ovens such as those found in water-based pressure-sensitive adhesive (PSA) tapes or solvent-based systems, meaning that the number of operators is reduced and run speeds can be increased. 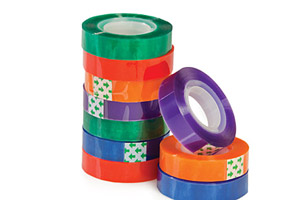 With stringent requirements on reclaiming solvents such as toluene, methyl ethyl ketone and acetone during the drying process, these tapes and labels also have greater ancillary costs than hot melts. The application thickness can be closely controlled and does not change from time of application, as the material is considered to be 100% solids at room temperature. This is in contrast to solvent- and water-based systems, where a similar level of control during the coating process can be employed, but subsequent evaporative loss can be estimated at anywhere from 30-60% of the initial coating weight.1

Papers have discussed the methods used for application of PSA products.2 Details on the methods commonly used for hot-melt PSAs are given as extrusion slot die, slot die and roll coating. The range of application viscosity is presented, but the authors mention that the use of low-viscosity products, and classically the development of formulations for the tape and label industry for hot-melt PSAs, has been high in polymer content and based primarily on the styrene isoprene styrene block copolymer (SIS). While these systems have shown to be durable, they can be limited due to the heat stability of SIS polymer.

Newer polymers, such as those based on styrene isoprene-butadiene styrene (SIBS), have been shown to have better heat stability and result in lower overall polymer content requirements to achieve similar performance characteristics.3 In practical application, both tapes and labels formulated with SIBS polymers have shown to exhibit much better heat stability when initially processed and when run at end customers. Formulated product may remain in a hold tank for 3-4 hours after an initial processing time of 2-3 hours. Chain scission of the SIS polymer may occur during this time, resulting in lower viscosity product with decreased performance.3

Mixing equipment for SIS polymers has also been shown in both laboratory and production testing to be limited to lower temperature (< 325°F) and higher shear mixers (dual arm and planetary), as polymer degradation was found using other types of mixers. Indication of formulation problems included viscosity drops of up to 20%, lower shear adhesion failure temperature (SAFT) and noticeable polymer degradation by GPC analysis. The SIBS polymer system has been shown to fare much better, allowing for the use of a wider variety of process equipment. This has been noted through improved color stability, as well as thermal stability of similarly formulated SIS and SIBS blends.

In practical application, formulations based on SIBS technology do not experience the same type of degradation as seen in SIS, including viscosity decreases or increases in viscosity and gel formation such as with styrene butadiene styrene (SBS) systems in field. These formulations have shown improvements in wet-out of substrates and lower overall energy requirements, as they can be applied
at lower temperatures than older, higher viscosity formulas. This, in turn, lowers the maintenance costs on the application equipment and operators can successfully run on a wider variety of application equipment and substrates.

Historically, hot-melt PSAs have also had a difficult time meeting the service range requirements of many tape and label applications. Even with newer radial polymer SIS technologies and/or formulations that contain combinations of SIS, SBS, and/or hydrogenated polymers such as SEBS and SIBS, this window of service has only expanded to partially meet the demands of certain industries. On one side, higher heat resistance has been achieved in several different ways as formulators have found newer sources of paraffinic oils and higher softening point tackifying resins, along with polymers previously discussed, which have shown higher shear adhesion failure temperatures (SAFT) but suffer on lower temperature requirements due to a loss of elasticity. Formulations using liquid polymers or tackifying resins and/or high melt index polymers reduce Tg, but lower the heat resistance of the compounded product. It is for this reason that many solvent- and water-based applications still cannot be replaced with hot-melt PSA.

In conclusion, while there are many barriers to entry in the PSA marketplace, rubber-based hot melts show great promise for a wide range of applications in both tape and label segments.

Nathan Tuttle is the Lab Manager at Evans Adhesive Corp. Ltd.
You must login or register in order to post a comment.