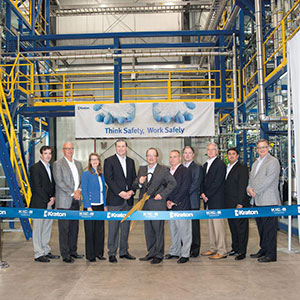 manufacture a range of styrenic block copolymer (SBC)-type materials in quantities ranging from 25 kg to 50 mt. The facility and its high-technology process equipment reportedly broadens the company’s abilities in polymeric chemistry by leveraging less traditional monomers and building blocks to meet customer needs and create innovative applications. This also reportedly opens the door to applications and industries where traditional SBCs were unable to be used.

The pilot plant is located within the company’s commercial manufacturing facility in Belpre, allowing the new facility to use the existing plant’s technical skills, talents and infrastructure. Its fit-for-purpose volume scaleup bridges the gap between laboratory and full-scale production of products within the development cycle, reportedly enhancing the company’s ability to deliver developmental polymers in customizable quantities in record time. It is intended to reduce reliance on Kraton’s commercial manufacturing plants for test runs, resulting in fewer type changes and improved utilization of its manufacturing facilities.