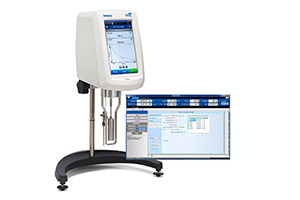 The test wizard can reportedly reduce the time and effort needed to set up tests, such as time to stop, time to torque, speed ramp/shear rate ramp, and temperature profiling. In addition, it can create a Thix Index Test, used to calculate the ratio of viscosity at low speed vs. viscosity at a higher speed, or a curing test to automatically reduce speed at preset torque values.

Many layout and navigation improvements have also been implemented, including the addition of a favorites bar.