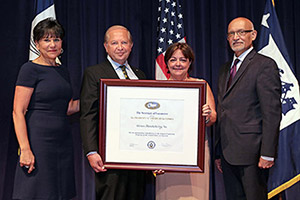 by U.S. Secretary of Commerce Penny Pritzker at a ceremony in Washington, D.C. The President’s “E” Award is reportedly the highest recognition any U.S. entity can receive for making a significant contribution to the expansion of U.S. exports.

“What our firm has experienced firsthand is how exports can be a source of growth and job creation,” said Harry Arnon, president and CEO. “Nationwide, exports have contributed one-third of economic growth since 2009. I am honored to be one of 45 companies receiving the President’s ‘E’ Award.”