These low- to high-viscosity polymers have highly reactive terminal thiol or epoxy groups and are widely used as sealants for insulating glass windows, sealants in construction, sealants for aircraft fuel tanks and fuselages, epoxy modifiers, or intumescent protective coatings.

The predominant monomer in the manufacture of liquid polysulfide polymers is Bis-(2-chloroethyl-) formal (diformal) and sodium-polysulfide (Na2Sx) with a sulfur x-rank of 2.4 to 2.6. 1,2,3-Trichloropropane (TCP) is added during the polymer synthesis to control the degree of branching of the polymer backbone. Polymerization of mentioned monomers to polysulfide polymers takes place in environmentally friendly water-based dispersion under the conditions of an emulsion polymerization according to the scheme in Figure 1.

The molecular weight of different polysulfide polymers grades ranges from 1,000 to approximately 7,000 g/mol.

Lower-molecular-weight polymers are used as reactive diluents in classical sealant applications and as modifier polymer and curing partner to epoxy resins improving the flexibility of the resulting adhesive. The most common grades of polysulfide polymers have molecular weights of 2,000-7,000 g/mol and are widely used in highly flexible sealants in insulating glass, as well as construction and aerospace applications.

The general polymer backbone structure of polysulfide polymers is roughly described by the following structural formula:

The resulting polymer has an aliphatic polymer backbone structure with low-temperature flexibility down to approximately -55°C. In addition, it provides chemical resistance to solvents, oils, fuels, and bases of all commercially available polymers due to its high sulfur content.

Liquid polysulfide polymers are light brown-colored, medium- to high-viscosity polymers. The polymers have been commercialized in a range of different viscosities, molecular weights, sulfhydryl (SH) contents and branching (see Table 1). The average molecular weight as a measure of chain length, SH-content and degree of branching determines the viscosity. 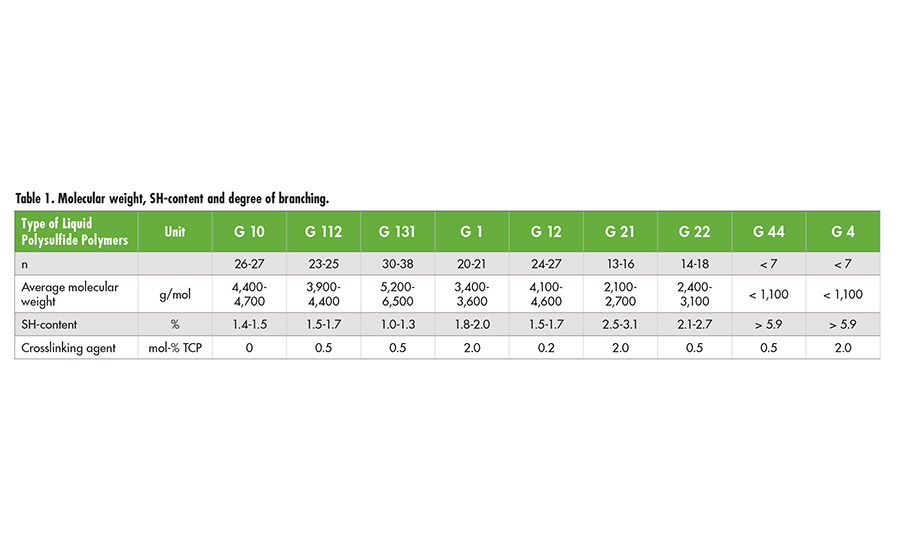 Liquid polysulfide polymers are soluble in solvents like benzene, toluene, and dichlorethane, and are partially soluble in aliphatic esters and ketones. Plasticizers, such as different phthalates, benzoates or chlorinated paraffins, are chemically compatible with liquid polysulfide polymers. There is no chemical compatibility to water or aliphatic hydrocarbons. Dispersed sulfur is chemically added to the polymer, generating S3 or S4 structures, and then receives part of the polymer backbone. Due to the highly reactive thiol end-groups, polysulfide polymers react under the influence of oxidizing agents, epoxies, isocyanates or acrylates by forming highly elastic and rubber-like high-molecular-weight macromolecules without significant physical shrinking.

Curing of polysulfide polymers to high-molecular-weight elastomers is most widely done by oxidizing the terminal thiol groups to disulfides. The most commonly used curing agents are oxygen donors, such as lead dioxide, manganese dioxide, and calcium peroxide, and organic hydroperoxides like cumene hydroperoxide.

Theoretically, the polysulfide polymer converts from 2RSH to R-SS-R regardless of the metal dioxide used. In practice, each metal dioxide takes the polymer to different levels of cure. It has been found that PbO2 yields a lower modulus product than MnO2, for example. Curatives with a stronger oxidation characteristic, such as permanganates or dichromates, yield a very high modulus sealant with improved thermal resistance. Organic peroxides tend to yield high-modulus elastomeric polymers. 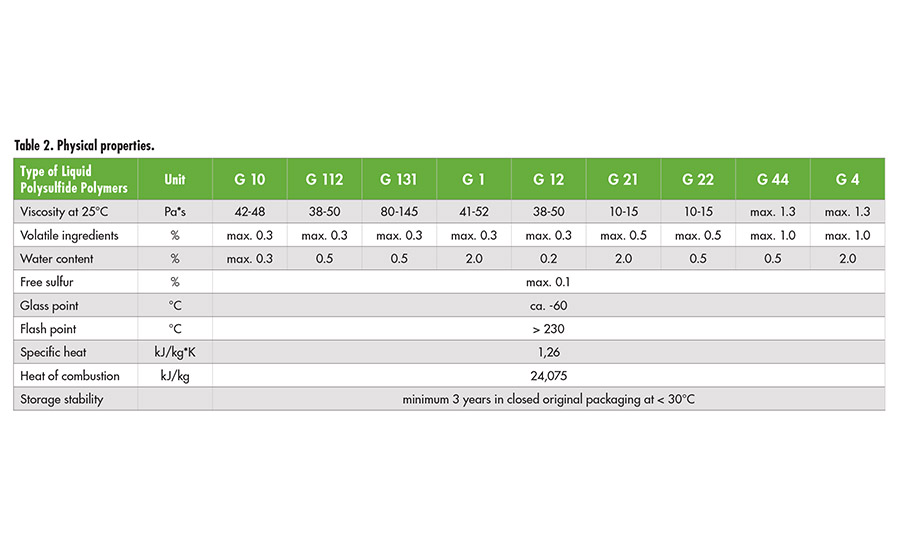 Water takes an essential part in the cure reaction of liquid polysulfide polymers. Most reactions can be permanently or severely retarded by the removal of trace water. Zeolites and BaO have been found as water scavengers and are used in the design of water-activated single-component sealant formulations.

In two-component sealants, a minimum level of 0.1-0.5 wt% water is mandatory in the MnO2-based curative part to initiate the curing. It is interesting that BaO, which is used to remove water to retard curing during the preparation of single-pack systems, also acts as a catalyst. In this case, BaO attracts water and creates a basic environment to catalyze the cure once sufficient water is present.

Other influential additives include acids and bases. All the reactions involving RSH can be catalyzed by the addition of a base; conversely, it can be retarded by the addition of acid. In practice, amines and similar compounds are used as catalysts, while weak acids such as stearic or oleic acids are used as retarders. It has been found that organic (mono) mercaptans, used as chain stoppers to reduce the amount of crosslinking, can have a severe retardation effect on curing even at a very low content. MnO2 is relatively insensitive to the mixing ratio, thus providing a special advantage. Traces of water have a strong catalytic effect on the curing speed. Curing speed increases as water is released during the oxidation of the thiol groups as a kind of autocatalytic reaction. 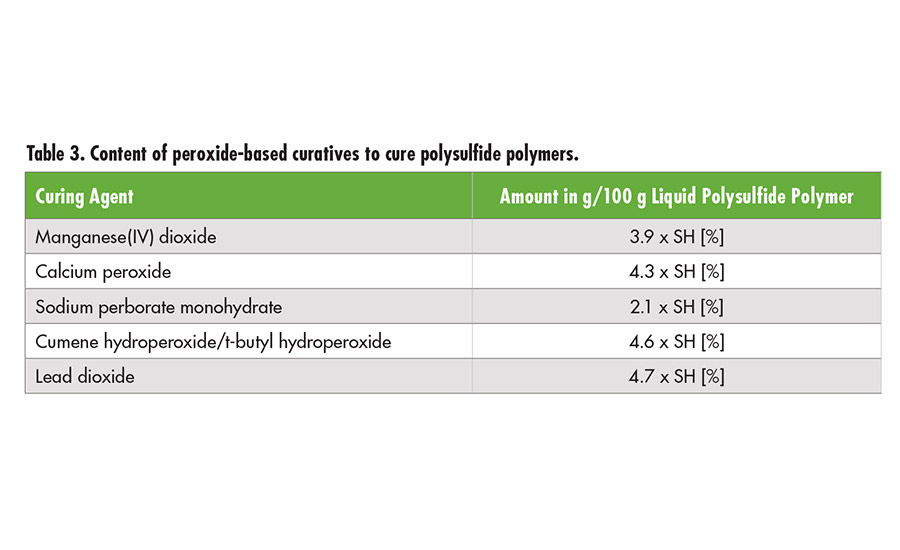 At elevated temperatures, phenolic resins are cured with polysulfide polymers through a polycondensation reaction. The product may be considered as a block copolymer of the rigid phenolic resin and the flexible polysulfide. Polysulfide polymers are widely used as reactive diluents and as curatives in two-component adhesives in blend with primary or secondary amines to cure bisphenol A/F or novolac-based epoxies.

In this case, the polysulfide polymers act as “soft part” and the epoxy resin as “hard part” in the resulting cured flexible adhesive. This results in adhesives with high flexibility, high impact strength, excellent chemical resistance and good adhesion.

Polysulfide polymers are compounded with a variety of plasticizers, reinforcing agents like silica and calcium carbonate, and polymer extenders. Processing the liquid polysulfide polymers in sealants and adhesives requires the use of high-shear mixing equipment.

The cured sealants based on the polymers have excellent resistance to many hydrocarbons, solvents and chemicals. Sulfur is the obvious distinguishing feature of the polymer backbone.

Swelling in solvents is directly related to the degree of crosslinking in the final cured liquid polysulfide polymer. Exceptional good swelling resistance of polysulfide polymers is noticed in hydrocarbons, gasoline, jet fuel, esters, ethers and ketones. 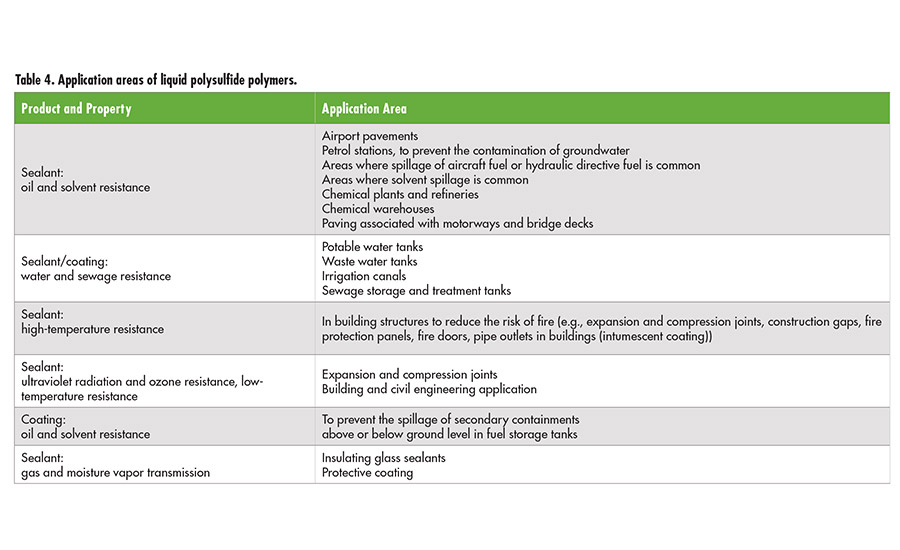 In addition, polysulfide polymers show excellent low-temperature flexibility, high oxygen and ozone resistance, impermeability to gases and moisture, and excellent flexibility and crack resistance. The formal group as part of the polymer backbone is responsible for this low-temperature flexibility. The absence of carbon-carbon double bonds and aromatic structure in the polymer backbone significantly reduce the sensibility against oxygen, ozone, and UV.

Polysulfide polymers are unique in their ability to internally relieve stress even in the cure state by interchange reactions between thiol terminal groups and disulfide linkages. The rate of stress relaxation depends on temperature, UV light or catalysts, especially basic inorganic salts such as NaSH, NaOH, and primary or secondary amines. The process is energized by the strain energy in the vicinity of two polymer disulfide groups.

Different polysulfide polymers are mainly used as the base polymer in highly elastic sealants. In aerospace applications, liquid polysulfide-based sealants are basically used to seal all parts of the aircraft fuselage, including fuel tanks. Other applications include high-quality sealants for buildings, water canals, sewage plants, gasoline stations, tank containers for fuel and solvents, highway and airport constructions, concrete coatings and sealants, boat hulls and decks, gaskets, gas-meter diaphragms, and printing rolls. Further important application areas include the use of polysulfide polymers as epoxy and rubber modifiers to improve the flexibility and elongation at break and the use in intumescent protective coating for steel constructions. Alternatively to the SH terminated Thioplast G types, epoxy functionalized liquid polysulfide polymers, Thioplast EPS, might be used. The polymer backbones of this kind are consisting of S2 linkages, formal groups and highly reactive epoxy-end groups.

The polymer backbone of the liquid polymer is dominated by the polysulfide backbone with S2-backbone structure, formal groups and highly reactive epoxy-end groups.

The polymers might be cured by typical hardeners for epoxies such as aliphatic amines, aromatic amines, amido amines, cycloaliphatic amines and Mannich bases. They might be used alone or in combination with other common epoxy resins of the bisphenol A/F or novolac type to formulate protective coatings with excellent chemical resistance and high flexibility.