A colorless, toughening, and chemically resistive polythioether has been developed for the formulation of adhesives, sealants, and coatings.

The features of the polysulfides can be mainly attributed to the disulfide linkages in the polymer backbone. These linkages, on the other hand, also lead to relatively high density and cold-flow characteristics. As the latter may be detrimental for some applications, polythioethers have been developed as a lightweight, less plasto-elastic alternative to liquid polysulfide polymers. Available polythioethers, however, struggle with reactivity, crystallization issues, unpleasant odor, or their yellowish color. This new generation of polythioethers was developed to address these issues (see Figure 1).** 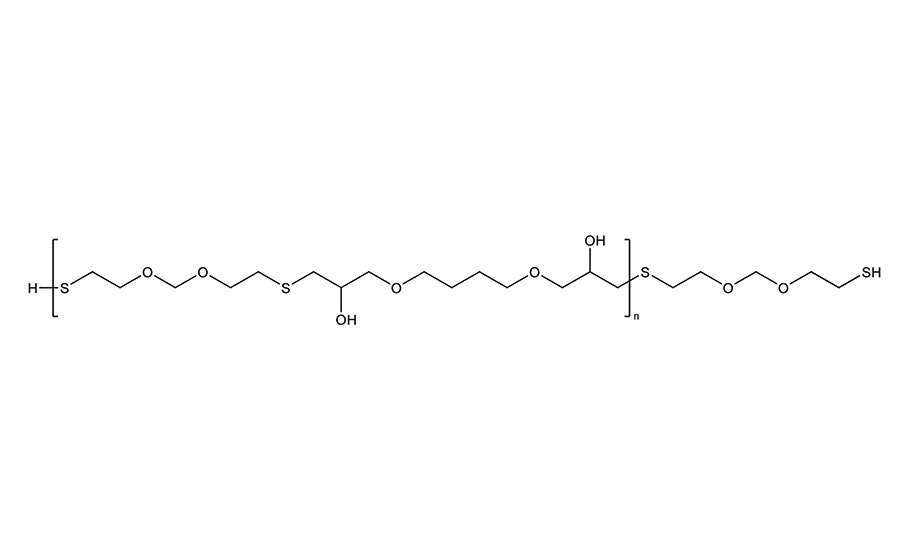 The new polythioether is a thiol-terminated liquid polymer with thioether groups in the polymer backbone. The terminal primary thiol end groups exhibit high reactivity, in addition to reactions with epoxy, isocyanate, or acrylic resins, as well as inorganic peroxides like MnO2, CaO2/BaO, perborates, and organic hydroperoxides like cumene hydroperoxide. The polythioether offers colorlessness, clarity, toughening performance, chemical resistivity, high elasticity, and reactivity, making it a candidate for various coatings, sealants, and adhesives applications. 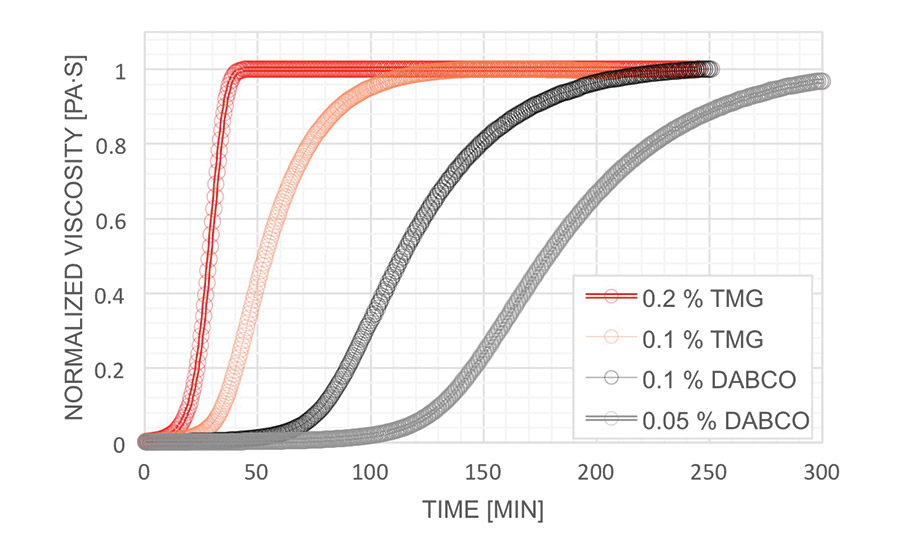 Productivity is an important factor in production, and fast-curing sealants, adhesives, and coatings are cost savers. Typically, reactivity comes at the cost of flexibility in cured epoxy products, as high flexibility can generally only be obtained by using high-molecular-weight amine-based polymers. The new polythioether changes these rules, offering curing times that are comparable to currently available curing agents. Figure 2 shows three different mixtures of the polythioether cured with a novolac epoxy resin.

The polythioether is compatible with various popular types of epoxy curative amines, which sometimes need days to cure. Due to its compatibility and high reactivity, the polythioether might also be used as a co-curative to enhance the curing speed of those amines while maintaining or even increasing the mechanical properties of a typical amine/epoxy system. 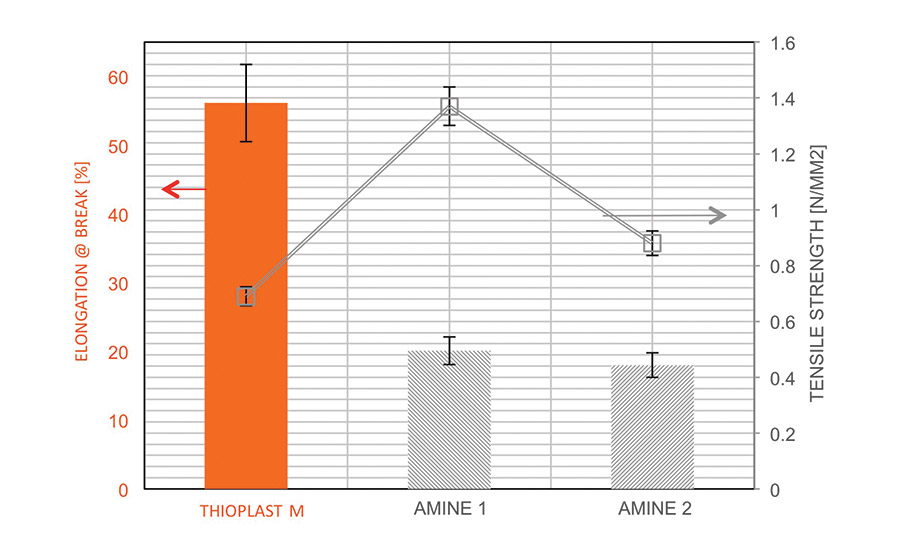 Figure 3. Elongation at break and tensile strength of the polythioether compared to commercial toughening polyetheramines.

Epoxy systems are well-known for their high tensile strength. However, when conventional curatives are involved, this comes at a lack of flexibility and impact strength. Used as the sole curative or as a co-curative with a conventional amine or aliphatic polyetheramine (even without the addition of fillers or other strengthening additives), the polythioether yields flexible products. 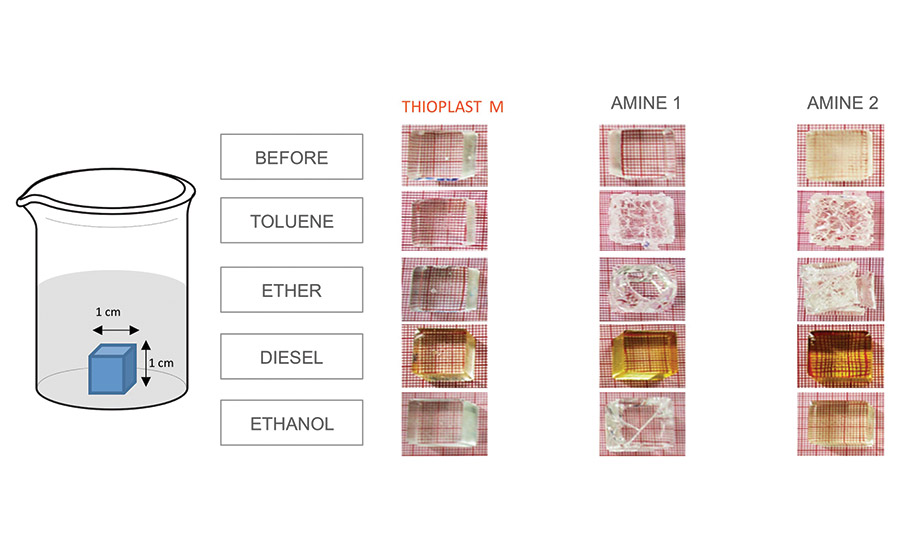 Figure 4. Schematic representation of the experimental setup (left). Test specimens before and after 21 days of exposure to different solvents.

In many cases, epoxy resins are the first choice whenever an adhesive or coating must withstand harsh chemical conditions. One reason that epoxy resins resist chemical attacks is due to their dense and rigid network structure. As described earlier, this rigidity comes at the cost of flexibility and impacts resistance. Whenever toughening curatives are used, the chemical resistivity of the cured system is reduced. This is the case as the curatives decrease the crosslinking level of the networks, which then are more easily attacked by chemicals.

Common curatives are chemically less stable than epoxies and therefore weaken the products chemical resistance even more. The polythioether backbone of the new material contains around 20% sulfur, an element that increases the resistivity of substances against a variety of different chemicals and solvents. Figure 4 shows a simple experiment conducted to study the chemical resistivity of a novolac resin cured with the polythioether and two amines as comparison.

The chemical resistivity test was carried out on 1 cm3 test cubes of the polythioether and two amines cured with a novolac-based epoxy resin. After seven days at 23°C/50% relative humidity (RH), the cubes are fully cured and get immersed into different solvents for 21 days at room temperature. As shown in Figure 4, the polythioether-cured novolac samples perform significantly better in the tested solvents. The inferior performance of the amine-cured samples is apparent in cracks, swelling, and color changes. 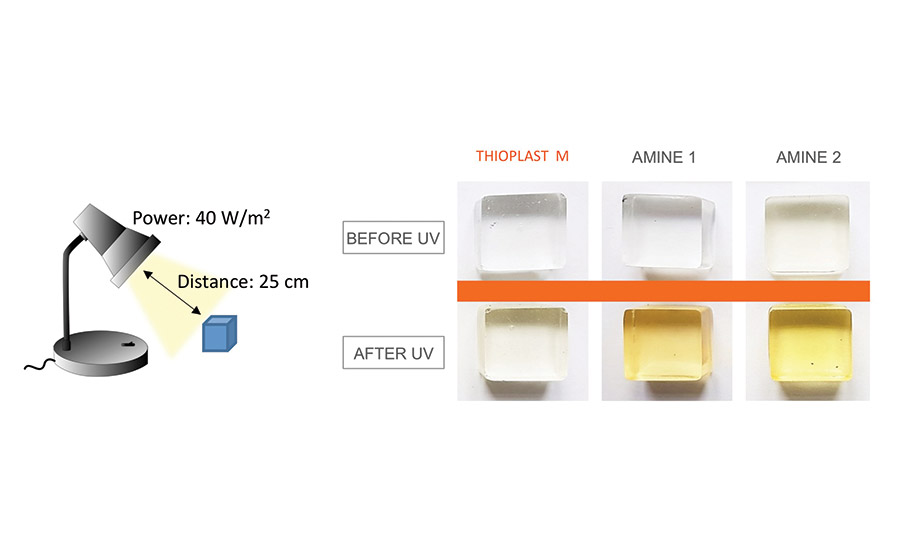 Figure 5. Schematic representation of the experimental setup (left). Test specimen before and after 14 days of exposure to UV light.

Most polymeric materials suffer from insufficient stability against UV exposure and will undergo photo-initiated degradation. One example is epoxy-based systems. UV light can attack at carbonyl groups, but even more easily at unsaturated bonds such as double bonds or aromatic structures. Aromatic epoxy resins are widely used in the industry, thus exposure to UV light will lead to polymer chain splitting. This results in the creation of radicals and a reduction of the molecular weight, which causes deterioration of the mechanical properties and yellowing.

Aromatic systems struggle when it comes to UV light resistivity, and it is hard for aliphatic polyetheramine-based systems to exhibit good UV/VIS spectral stability. Figure 5 shows an experiment that compares the resistivity of the new polythioether-based cured epoxy system with two different polyetheramine-cured epoxies.

Used in its pure form or as an additive with other curatives, the polythioether cures epoxies, isocyanates, or unsaturated systems such as acrylic resins help to overcome challenges like low-temperature crack resistance failures, reactivity issues, impact resistance problems, or a lack of chemical resistivity. Its ability to improve flexibility allows epoxy-based coatings to pass impact resistance tests at below -50°C.

In coatings applications, the possibilities range from anti-corrosive coatings, anti-fouling coatings, clear coats, intumescent coatings, and chemical protective coatings. In addition, the polythioether enables the formulation of highly flexible epoxy-based adhesives and even sealants due to the achievable high elongation at break. Possible applications include:

For more information, contact the author at (49) 3661-78111 or christian.probst@nouryon.com, or visit www.nouryon.com.

Christian Probst, Ph.D., is the Business Development Manager for Nouryon. For more information, contact the author at (49) 3661-78111 or christian.probst@nouryon.com, or visit www.nouryon.com.