Today’s urethane product formulators need to meet a wide range of consumer and regulatory requirements. As premium chemistries, reactive adhesives and sealants must be compliant, have good safety and sustainability profiles, and perform exceptionally. They must provide good adhesion and bonding, even on challenging substrates. They must be flexible, but also tough, minimizing brittleness, cracking, discoloration, and breakdown of the adhesive during its expected life span. Lastly, they must be easy to use, offering long open times and short cure times.

Urethane adhesives and sealants are valued for delivering excellent toughness, abrasion resistance, flexibility, cold temperature properties, and adhesion to a wide variety of substrate types. They have superior mechanical properties relative to other high-performance adhesive and sealant chemistries, including lower modulus, better tensile elongation, and high shear and peel strength. These attributes make urethane systems valuable in applications such as construction, packaging, and transportation. 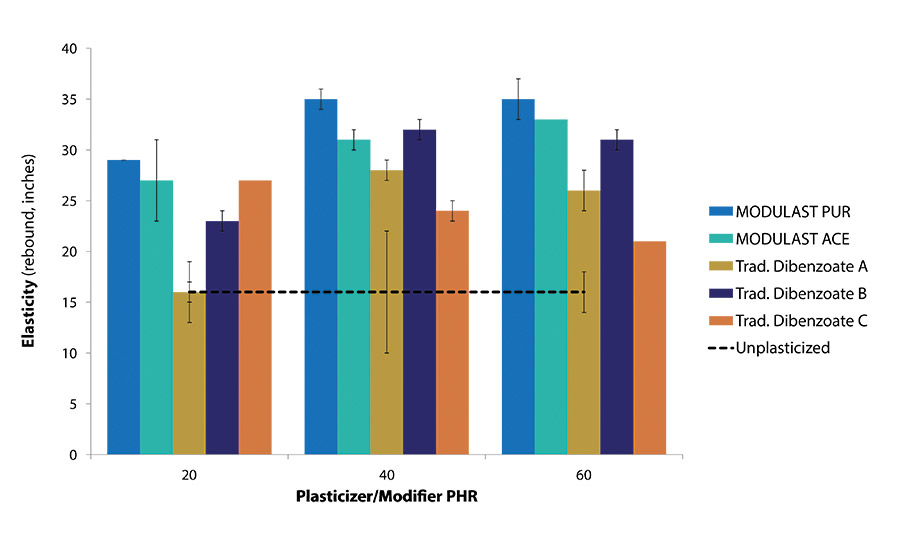 When manufacturers need soft elastic urethanes, the utilization of plasticizer technologies are preferred vs. changing the urethane raw materials or ratios. The plasticizers enhance elasticity and aid in flow characteristics of the adhesive system. The traditional plasticizers most widely used in polyurethane applications have relatively good health, safety, and environment (HS&E) profiles vs. the phthalate plasticizers used in other application areas.

There are concerns about the use of these plasticizers in connection with potential performance issues, such as exudation or the presence of higher levels of impurities that may interfere with the formation of the polyurethane polymer backbone and, ultimately, the mechanical performance. For example, if the plasticizer begins to exude from the adhesive, the bond between the adhesive and substrate could be reduced, causing the adhesive to fail before the end of its expected lifespan. These plasticizers also have limited ability to improve resilience and can impact aesthetics such as color and odor.

New developments in urethane-grade modifiers can address these issues with traditional plasticizers in adhesive systems while also enabling formulators to achieve greater performance for key properties and a desirable HS&E profile. New polyurethane modifiers, available under the MODULAST  brand name, are novel solutions, due in part to their composition, as well as their tightly controlled, consistently low concentrations of residual hydroxyl content (OH level).

In this discussion, the authors evaluate key performance features in reactive polyurethane systems incorporating the new urethane modifier technologies, in contrast to traditional and widely used plasticizers for these applications. All of the technologies discussed are low-VOC and non-phthalate, which are important considerations for the safety, sustainability, and compliance of modern formulations.

The authors selected two new urethane modifiers, as well as several traditional plasticizers for the study. The plasticizers were selected because they are currently widely used in urethane applications. The selected modifiers were:

The plasticizers in the evaluation were:

Elasticity provides critical functionality in adhesives and sealants. When elasticity is low, it can translate to brittleness in the formulation. Brittleness is a common and challenging performance issue that can lead to adhesive failure.

Both MODULAST PUR and MODULAST ACE exhibited higher elasticity and reduced brittleness vs. the traditional plasticizers tested, with MODULAST PUR performing the best. In the polyether polyurethane evaluation, both MODULAST offerings exhibited greater softness than the competitive alternative chemistry, as targeted. 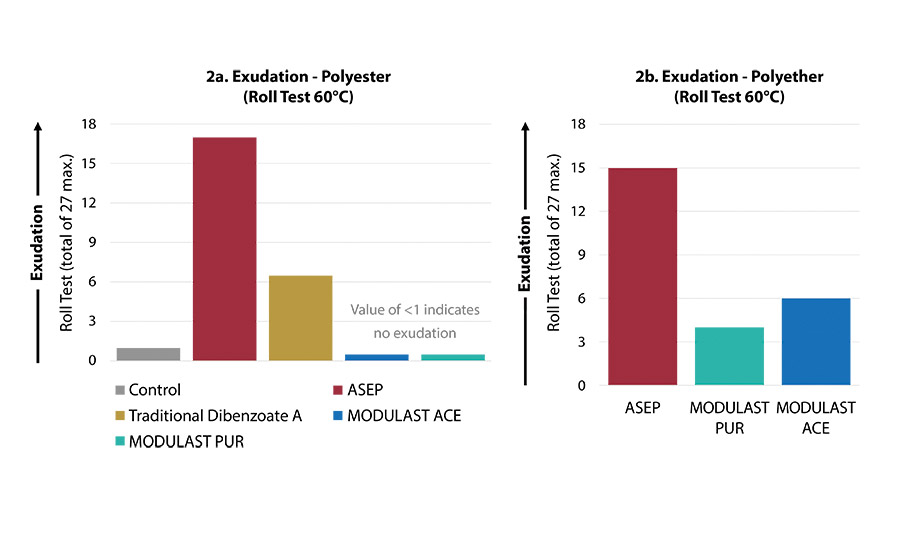 Figure 2. In the polyester system (2a), both urethane modifiers demonstrated no exudation in the roll test (attributed to mold release), in contrast to widely used plasticizers. ASEP showed significant exudation. In the polyether system (2b), similar performance is shown.
Click chart to expand

The roll test was used to determine the level of exudation from a reactive polyurethane system. In this test, a cast film is prepared in triplicate, and each sample is covered with an absorbent paper, tightly rolled and banded, and placed in a 60°C oven. After 24 hrs, the film is unrolled, and the amount of exudation is rated from 0 (indicating no visible oily droplets) to a maximum rating of 3 (indicating complete saturation of the paper). The absorbent paper is then replaced with fresh paper, and the process is repeated daily. 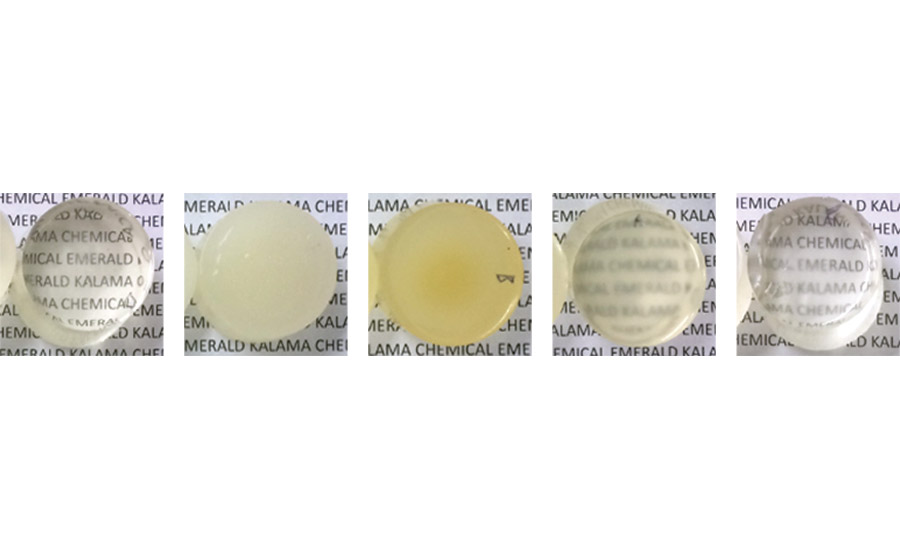 The final roll test score is the sum of the daily values. Higher values denote more exudation and less compatibility between the polymer and the additive.

Both ASEP and the traditional dibenzoate plasticizer demonstrated significant exudation. The new urethane modifiers are differentiated from typical plasticizers by showing high permanence as a result of excellent compatibility tailored for this application.

Aesthetics are another important factor for premium end products. Some plasticizers have a tendency to cause yellowing, which can be undesirable, especially when the end product may be visible to the consumer. An example is with packaging adhesives, where a discolored or opaque adhesive may reduce the appearance of value. 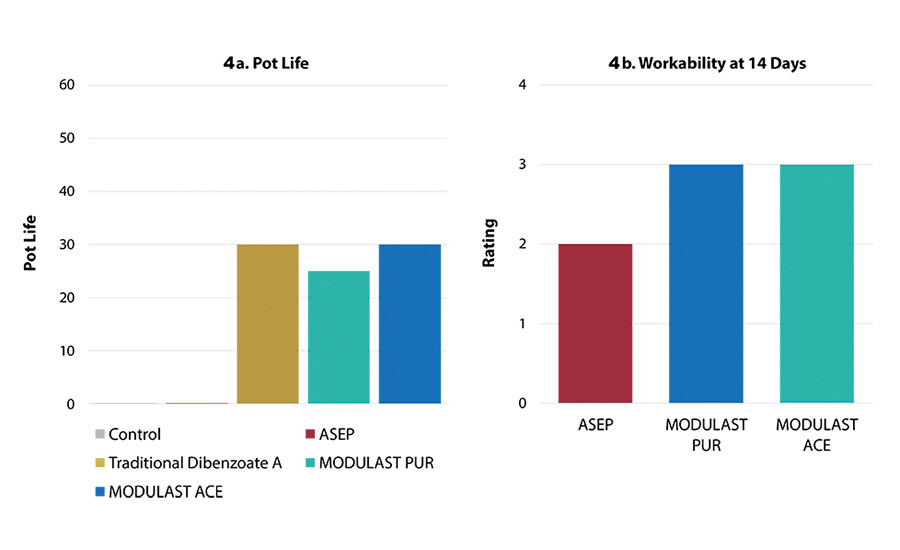 Pot life and workability are related to formulation stability. Pot life is important in 2K systems to indicate the workability and how much time the end user has to apply the product after mixed. In the room temperature-cured systems, which may sit on a shelf or package for an extended period of time before a contractor or DIY customers may use it, change in workability is denoted by a change in rheology.

Pot life was determined by the point at which the viscosity of the formulation doubled in a Gardner tube. Samples were heated to 90°C, and measurements were taken every 10 min, allowing for the samples to re-equilibrate. Workability was rated by a measuring change in rheology after 14 days, with a rating of 4 being excellent and 1 being poor and unworkable.

The new urethane modifiers demonstrated significant potential for formulators to improve performance in polyurethane adhesives and sealants, addressing the common drawbacks associated with the use of plasticizers. Their attributes, compatibility, and consistently low levels of hydroxyl content resulted in excellent mechanical properties, permanence, color, and processing characteristics in reactive urethane systems. Performance has been evaluated in both thermoplastic and thermoset applications and can extend further to a wider array of polyurethane adhesive and sealants, where these characteristics are critical.

In addition, the modifiers tested provide an equivalent HS&E and regulatory profile to current plasticizer technologies such as ASEP and dibenzoates. They have similarly low VOC levels and are non-phthalate. MODULAST PUR has no hazard statements under REACh/CLP and has the potential to be utilized in products certified to meet Ecolabel requirements.

Overall, the new modifiers are an attractive alternative for the traditional plasticizers used in a wide range of adhesives and sealants. In addition, they can be utilized in end products where formulators have avoided the use of plasticizers due to performance concerns such as exudation.

Figure 2. In the polyester system (2a), both urethane modifiers demonstrated no exudation in the roll test (attributed to mold release), in contrast to widely used plasticizers. ASEP showed significant exudation. In the polyether system (2b), similar performance is shown.
X

Kyle Posselt is a R&D Chemist for Emerald Kalama Chemical.