A Biocide for Many Seasons

An EPA-registered sodium benzoate is approved in the U.S. for use as an in-can biocide in waterborne adhesives, coatings, inks, homecare products, raw materials, and other applications.

Proper preservation is an important contributor to sustainability, as it extends product shelf life and reduces waste associated with quickly spoiled products. An extensive study by the American Coatings Association concludes that preservation has a beneficial impact on carbon footprint.1 Preservation is also critical to protect products, manufacturers, and consumers from the risks associated with microbial contamination, such as reduced product performance, adverse health effects, and eroded consumer trust due to a potential recall.

The Green Chemistry and Commerce Council found that “green-chemistry marketed products…grew 12.6 times faster than their conventional counterparts and 5.4 times faster than the market” from 2015-2019.2 However, few chemistries become available as new alternatives because the barrier of biocide registration is quite high, requiring years, great expense, exemplary toxicology data, and proven efficacy.

With the diminishing list of available preservatives, manufacturers need new candidates with exemplary safe use profiles. Recently, sodium benzoate has become increasingly valued outside of its traditional food and beverage applications, moving into cosmetics, pharmaceuticals, home care, and industrial applications. It offers a combination of effective antimicrobial action and good water solubility, and it has an eco- and consumer-friendly profile.3 It is readily biodegradable, nature identical, listed by EPA Safer Choice as “verified to be of low concern,” and is considered non-irritating to the skin by a World Health Organization (WHO) assessment.4

Sodium benzoate is classified as a low-risk substance by the European Commission and is generally regarded as safe (GRAS) by the U.S. Food and Drug Administration (FDA).5,6 A sodium benzoate product* was registered with the EPA as a Federal Insecticide, Fungicide, and Rodenticide Act (FIFRA) biocide in the U.S. in 2020 with full state approvals in 2021.7,8 The material is approved in the U.S. for use in waterborne adhesives, coatings, inks, homecare, raw materials, and many other applications.7 (While this article will discuss the use of sodium benzoate and antimicrobial performance in adhesives, only the registered EPA FIFRA product may be used as an in-can biocide.)


The Role of pH

Organic acids have been used since ancient times through fermentation methods to preserve foods meant to sustain people well after harvest time. Organic acid preservation applies to pickling many vegetables, including cabbages, peppers, and cucumbers, and even meat in the form of fermented sausages.9,10 For food preservation, an anaerobic and low pH environment (< 4.6), in combination with salts, can eliminate or retard the growth of harmful organisms.9

The organic acids typically used to lower pH in these foods are lactic acid and acetic acid. Benzoic acid and its sodium salt, sodium benzoate, function differently, affecting more than just pH. Benzoic acid—the antimicrobial active component of the pair— is much more hydrophobic than acetic acid or lactic acid and can migrate across the cell membrane to acidify the pH inside the cell.11,12 The pH imbalance causes disruption in the cell’s ability to digest food, killing the microorganism. This ability to migrate across the microorganism’s cell membrane to disrupt cell pH balance makes sodium benzoate/benzoic acid much more powerful in terms of minimum inhibitory concentrations compared to lactic acid or acetic acid.13-15

Figure 1. Benzoic acid concentration in pure water as a function of pH and 0.5% sodium benzoate.


Figure 1 is a simple model with limitations, in that:

A low, controlled product pH can be extremely beneficial for the efficient use of sodium benzoate, which will be observed later in the adhesive resin experiments. Polyvinyl acetate waterborne resins and products are often formulated or manufactured in the pH range of 3-4.5. Based on Figure 1, these materials have an ideal pH range for efficient usage of sodium benzoate due to benzoic acid concentration.

Experiments were performed with unpreserved waterborne emulsions of polyvinyl acetate (PVAc) homopolymer resin. The EPA-registered sodium benzoate was dosed into the PVAc resin and mixed with a dispersion blade at 1,200 rpm for 15 min. The pH was measured with a Mettler Toledo FiveEasy Plus pH meter with Mettler Toledo LE438 pH probe and adjusted with 10% HCl and 10% NaOH.

Figure 2 illustrates the microbial challenge results for the negative (unpreserved) control at pH 4. Yeast and mold remain serious challenges for this system, while the bacteria eventually adapt and thrive after multiple inoculations. The negative control shows that all five organisms will eventually thrive in the unpreserved PVAc resin. 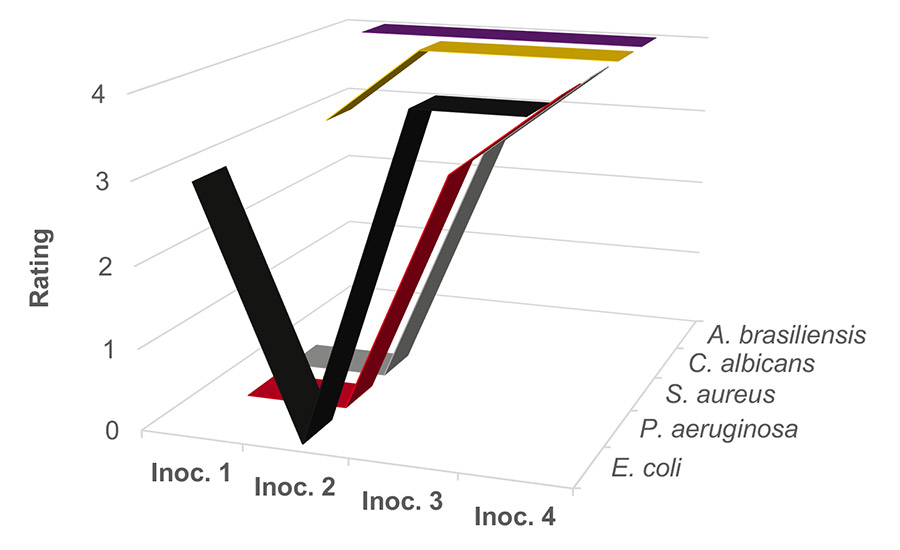 
Figure 3 shows the results of adding 0.5% (by weight) sodium benzoate at pH 4. The bacteria is completely killed after each inoculation; however, the yeast and mold remain a challenge. The initial inoculation of mold was killed off, but subsequent inoculations resulted in the mold growing under these conditions. The yeast did not appear to be affected at this dosage and pH. 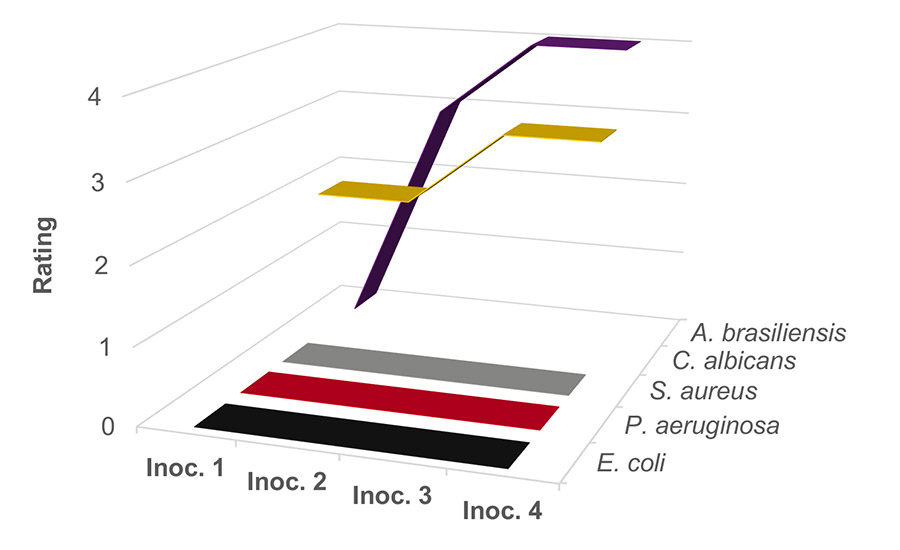 
Results at 0.75% concentration, not shown here, showed that the system was still susceptible to mold and yeast. Figure 4 shows the results of increasing the concentration of sodium benzoate to 1 wt% at pH 4. The bacteria, mold, and yeast are completely killed following each of the four inoculations. Passing a four inoculation challenge method shows that this system is well-preserved against in-can microbial contamination. 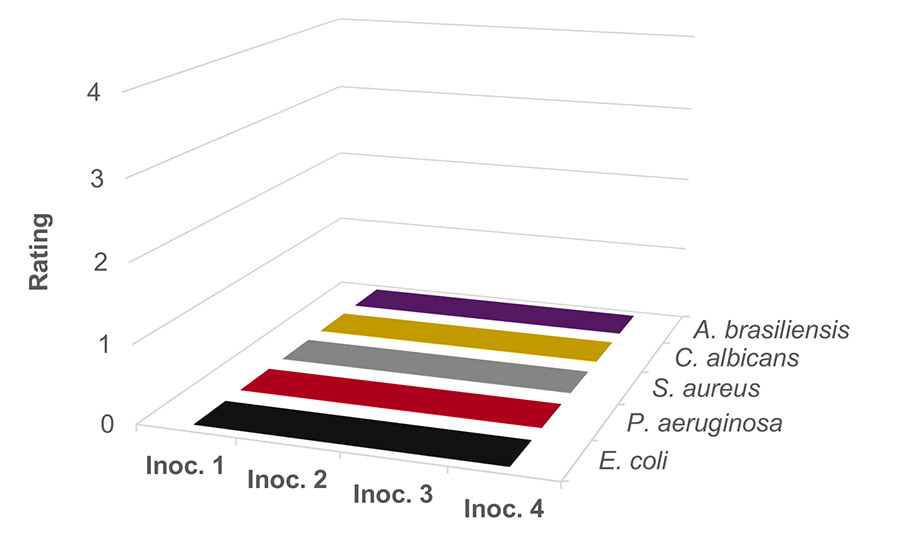 
While a dosage of 0.5 wt% of sodium benzoate at pH 4 did not sufficiently preserve against mold and yeast, Figure 5 shows the positive outcome of reducing the pH from 4 to 3.5 while maintaining the 0.5 wt% dosage. The bacteria, mold, and yeast are completely killed following each of the four inoculations. This result highlights the importance of the benzoic acid concentration and pH relationship shown in Figure 1. Decreasing the pH provides a more efficient usage of sodium benzoate. 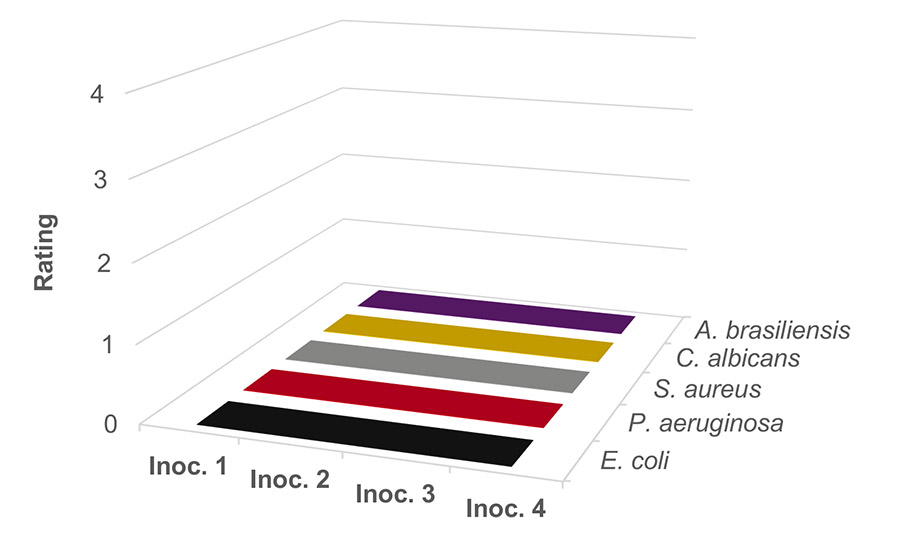 The EPA-registered sodium benzoate is approved in the U.S. for use as an in-can biocide in waterborne adhesives, coatings, inks, homecare products, raw materials, and other applications. This registration expands the palette of available chemistries to preserve these products and provides a new option with a favorable HS&E profile.

Demand for greener, non-sensitizing preservation is growing, with many classical chemistries being under scrutiny. Sodium benzoate provides a suitable alternative to meet these market needs while also achieving sufficient preservation to protect consumers, products, and brands from the hazards of microbial contamination. Lowering the pH from 4 to 3.5 can provide a significant benefit for efficient usage of sodium benzoate. Challenge testing presented herein showed that 0.5 wt% sodium benzoate can be used to produce a well-preserved waterborne PVAc resin at pH 3.5.

Julie Vaughn Biege is an industry expert and consultant.