Naphthenic specialty oils provide benefits in terms of their suitability as a replacement for silicone fluids in formulations and their ability to reduce microbial growth in silicone sealant joints.

Appreciated for their thermal and chemical stability, silicone sealants are used extensively in the construction industry. Silicone is in short supply globally, however, and sealants represent only one of many products using it as an ingredient. Yet, so far, none of the major silicone suppliers have announced significant capacity extensions.

When we also consider expectations of surging demand from developing countries, it seems realistic to predict supply shortages for silicone persisting in the long term. In addition to the continued strong demand, the tight global supplies of silicone are driving up prices, making producers of silicone-based products eager to find compatible and cost-effective alternatives.

A recent study provides some hopeful news, finding that naphthenic oils can offer a viable alternative to silicone fluids. A newly developed range of specialty oils also provides formulators with the right balance between viscosity, color stability, and volatility.

The comparative study showed that selected naphthenic oils can be used to replace silicone fluids partially or fully, resulting in reduced manufacturing costs. The research revealed that, in order to be a successful candidate for replacing silicone fluids, the naphthenic oil needed to display the right balance between three important performance criteria: compatibility, loss of mass, and color stability.

Of course, compatibility is of primary importance; if compatibility is not optimized, the result is bleeding on sealant surfaces. Oils of lower molecular weight have lower viscosity and will be more compatible with the polymers used in silicone sealants. However, such oils are inherently also more volatile, which is not ideal in terms of loss of mass or shrinkage.

Shrinkage, on the other hand, benefits by utilizing oils of higher molecular weight. Color stability benefits from both lower molecular weight and low aromatic content. Depending on the silicone sealant formulation, the balance between high and low molecular weight generally results in a naphthenic process oil of 3-11 cSt (at 40°C).

In the comparative study, the performance of naphthenic oil was compared with that of paraffinic oil. The formulation tested in the study was for an acetoxy-curing silicone sealant using 25 wt% of different process oils. Formulations made with naphthenic oil of varying viscosity were compared with formulations made with paraffinic oil or silicone fluid (polydimethylsiloxane, PDMS).

Results from the study indicate that the loss of mass at high temperatures is primarily dependent on the volatility of the oil (see Figure 1). So although process oils of low viscosity are generally more compatible, they also have an inherently higher volatility, resulting in greater loss of mass. The level of exudation at cold temperatures is mainly due to the compatibility between the polymers of the silicone and the fluid. 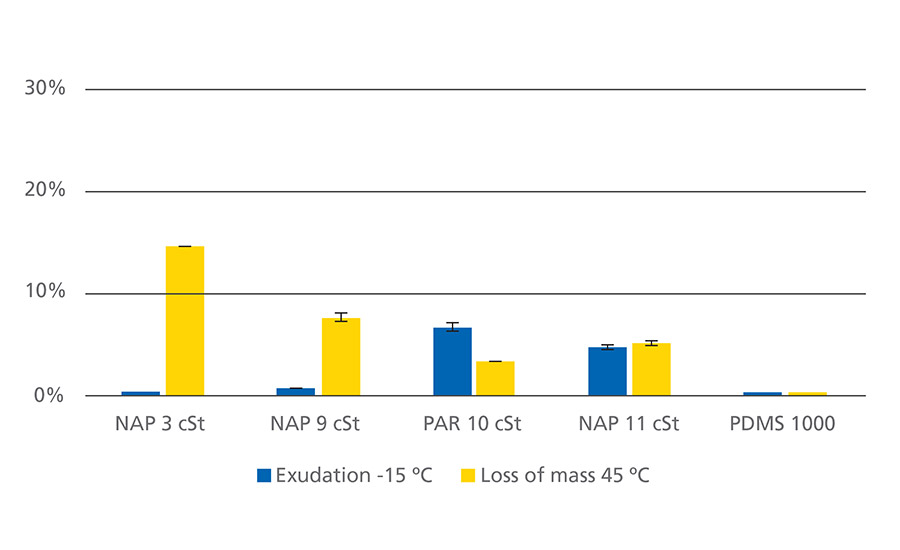 In addition, the study results provided evidence for the fact that the high solvent power of naphthenic oil allows for the use of an oil of higher viscosity without loss of compatibility. The conclusion of the study is that silicone sealants can be formulated with up to 25% of a suitable naphthenic process oil with good results and no bleeding.

In another recent project, researchers set out to study how the use of naphthenic oil could potentially suppress microbial growth in sealant joints. Previous studies had indicated such a link, justifying a closer examination.

Susceptibility to microbial growth is a well-documented problem in sealant joints, especially in warm and humid environments like kitchens and bathrooms. This issue is not just unpleasant and unhygienic; it can also cause permanent staining and/or etching, as well as shorten the lifespan of joints. The standards underpinning the CE marking required for products marketed within the European Union are therefore extra stringent for sealants used in these settings.

In order to conduct the comparative study, prepared silicone sealant samples were extended with either naphthenic specialty oil or other alternatives in the market. So as not to interfere with the study results, no biocide was included in any of the samples. The sealants were then examined at an independent specialist lab, where standard procedures were used to establish the relative microbial growth in the samples.

These procedures involve leaving the samples in separate agar discs at a regulated temperature for the duration of 28 days. The test method determines the deterioration due to the action of fungi, bacteria, and soil. This can be determined by a visual examination and/or changes in mass and other physical properties.

To achieve a CE marking, a sealant needs to meet the standards of EN ISO 15651-(1-5):2017, depending on the area of application. Sealant materials applied in sanitary joints are tested for microbial growth according to EN ISO 846, where the growth intensity is evaluated visually according to a rating scale from 0 to 5 (see Table 1). 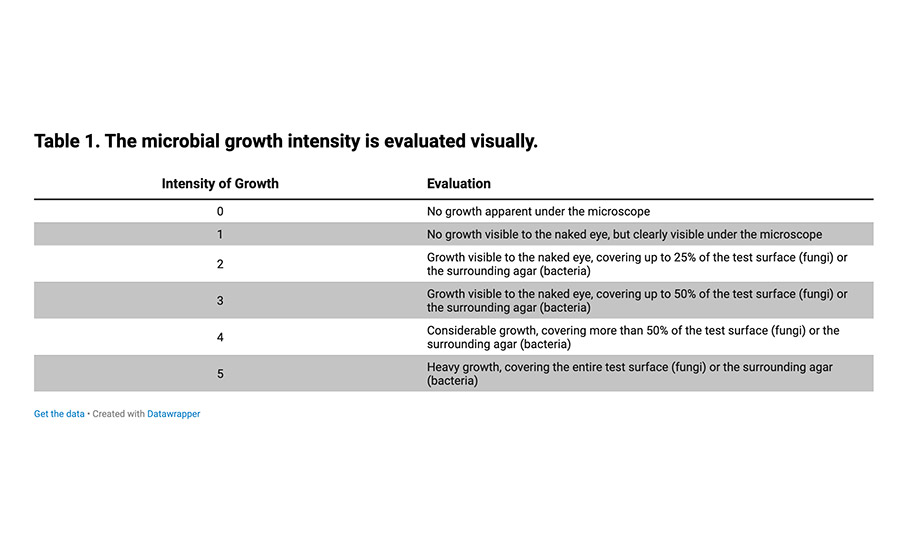 For the sealant samples formulated with paraffinic oil, the lab observed some undesirable mold growth on the underside (the one in contact with the agar). The creamy wax-like mold colony covered less than 25% of the sample surface. Due to the nature of the sample and the fact that the growth was clearly visible to the naked eye, it was given a mold growth rating of 2 (see Table 2).

On the surfaces of the sealant samples prepared with a selected naphthenic oil, dried fungal suspension was clearly visible, but no active mold growth was observed. The results showed that a transparent RTV-1 acetoxy-curing silicone sealant extended with 20 wt% of naphthenic specialty oils had a lower level of microbial growth compared with the sealant samples containing other extending alternatives. 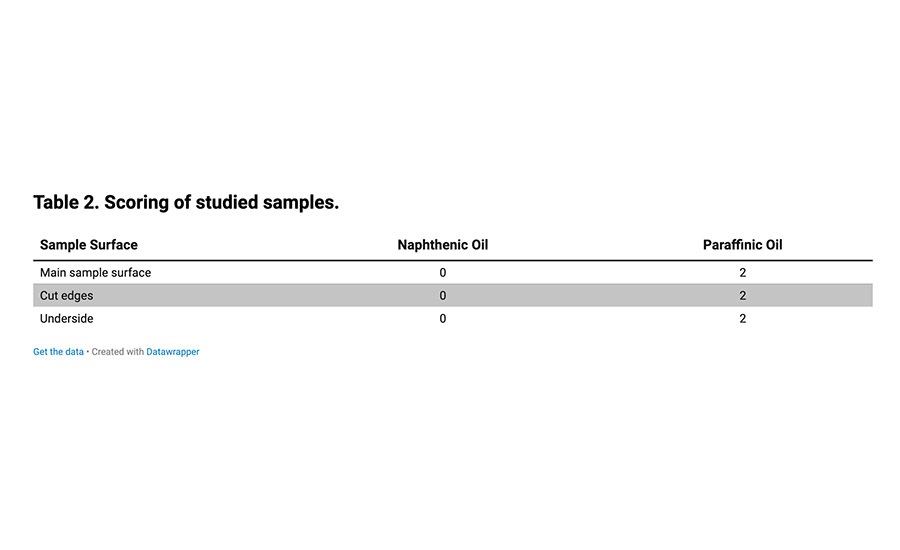 In fact, the sealant samples formulated with one specific naphthenic extender oil showed no microbial growth even under the microscope, resulting an intensity rating of zero. These results indicate that the use of naphthenic process oil can indeed have significant impact on bacterial growth in silicone sealant products.

Both of these studies show the potential that naphthenic oils present to formulators of silicone sealants. Benefits can include the cost-effective replacement of silicone fluids, as well as a means of reducing the problems related to microbial growth.

Note: All images courtesy of Nynas.