The bio-economy in Europe is robust, as sales in bio-based industries are on the rise.

The bio-based industries continue their ascent in the European bio-economy, marking a total contribution of €780 billion (approximately $874.9 billion). This figure is an increase of 4% compared to 2017 and more than 20% compared to 2008, which is the earliest data taken into account in this series of reports by nova-Institute. The first report of the series was commissioned by the Biobased Industries Consortium (BIC) in 2017. Since then, the report has been updated on an annual basis; this latest version covers the period from 2008 to 2018.

The primary sectors (agriculture, forestry, and fisheries), as well as food, beverage, tobacco, and paper and paper products, can be considered fully bio-based and are thus fully accounted for in the bio-economy. For other manufacturing sectors (e.g., chemicals, pharmaceuticals, and textiles), the bio-based shares were estimated and included in the report’s assessment.

Figures for the bio-based chemical industry (including plastics) reveal a turnover of around €54 billion (~ $60.6 billion) with the bio-based share relatively stable at around 15%, an increase of 7.5% compared to 2008. An analysis of the 2018 Eurostat data shows that the turnover of the total bio-economy, including food and beverages and the primary sectors of agriculture and forestry, amounts to just over €2.4 trillion (~ $2.2 trillion) in the EU-27 and the UK. This represents an increase of around 25% since 2008.

The food and beverage sector accounts for about half of those sales, and the bio-based industries (e.g., chemicals and plastics, pharmaceuticals, paper and paper products, forest-based industries, textiles, biofuels, and bioenergy) account for roughly 30%. Almost another 20% was generated by the primary sectors of agriculture and forestry. 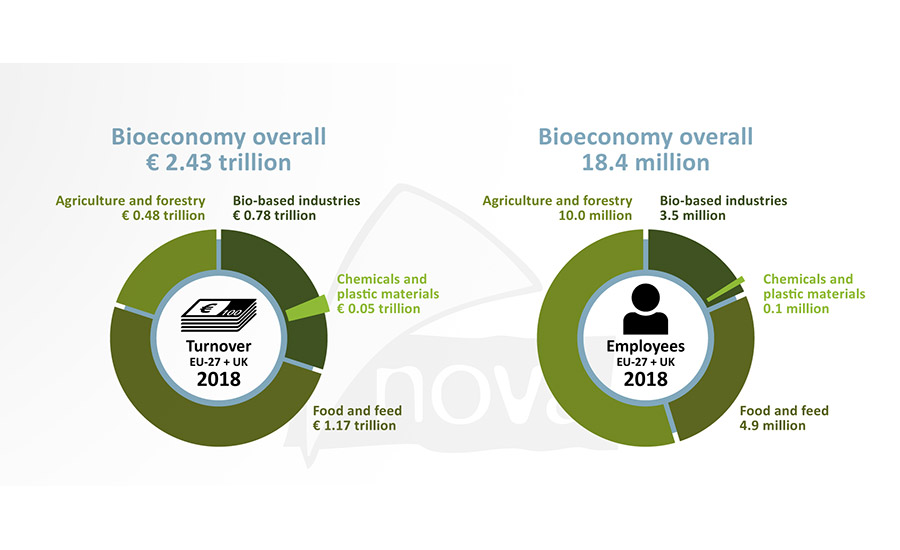 In contrast to the rising sales figures, employment in the European bio-economy declined slightly, from 18.5 million people in 2017 to a total of 18.4 million in 2018. This reduction is largely due to efficiency increases in production. The primary biomass production, mainly agriculture, provides a majority of the entire employment (54%) but comparatively low sales (20%).

The data also demonstrate clear differences between groups of member states. For example, the Central and Eastern European countries of Poland, Romania, and Bulgaria are more represented in the lower value-added sectors of the bio-based economy, which create many jobs. This indicates a strong agricultural sector that tends to be labor intensive compared to the high value-added sectors.

In comparison, Western and Northern European countries generate much higher turnover relative to employment, indicating a larger share of refining and value-added industries. The countries with the highest turnover-to-employment ratios are Finland, Belgium, and Sweden.

The full report is available free of charge at https://renewable-carbon.eu/publications.

Note: Opening image courtesy of metamorworks via iStock/Getty Images Plus.