Typical thickeners used for waterborne polychloroprene dispersions include methylcellulose, carboxymethylcellulose, and acrylate thickeners. The purpose of the thickener is to increase the viscosity of the finished adhesive to provide enough sag resistance, as well as to control the level of penetration of the adhesive into the substrate (e.g., in the case of foam bonding). Thickeners are also added in order to prevent the settling of pigments, fillers, or metal oxides such as zinc oxide.

Microfibrillated cellulose (MFC) was first introduced back in the eighties.1 During the following years, its potential and possible uses have been reported extensively, ranging from uses as a thickener in paints to an oxygen barrier in food packaging.2 Until the beginning of 2010, the research and small-scale production of MFC was conducted mainly at universities and small pilot facilities. The world’s first commercial MFC production facility opened in 2016, producing 1,000 dry MT.3

MFC is a renewable, bio-based, value-added, and multifunctional product made of cellulose consisting of fibrils with lateral dimensions in the nanoscale and lengths up to micron scale. The fibrils have the ability to form stable three-dimensional networks in adhesives and sealants, leading to excellent flow and anti-sag properties. The secret behind these properties is the extremely large surface area, combined with numerous hydroxyl groups on the surface of the fibrils.

The main characteristic of this fibril structure resembles a hybrid of water-soluble polymers and insoluble additives. MFC has a high viscosity at low shear, provides yield stress, is shear thinning, and has a high water holding capacity. The insoluble nature of the cellulose fibrils also leads to excellent stability and compatibility. MFC is stable at a wide pH range (1-13) and is compatible with common water miscible organic solvents, as well as with surfactants. The viscosity of MFC is independent of the temperature, giving the same performance regardless of the surrounding conditions.


Instead, the viscosity of hydroxyethyl cellulose (HEC) solution reaches a plateau around the shear rate of 0.1 s-1. This means that the viscosity at rest is much higher for MFC, nearly 100 times higher. This will give considerably better stability under storage, especially in terms of syneresis and settling. At higher shear rates, the HEC solution and the MFC suspension have comparable shear thinning, which helps in the pumping, spraying, mixing, and application of the formulation.

One of the interesting features of MFC is its ability to allow excellent sag resistance combined with good levelling.4 The thickening mechanism of MFC is based on the physical entanglement of nano-sized fibrils and hydrogen bonding between the hydroxyl groups of MFC and hydrogen bonding compounds in the formulation. Once shear is applied, the viscosity of the adhesive reduces rapidly due to the break-up of the network.

After shearing is stopped, the network buildup is delayed due to the interference of the other hydrogen bonding components in the formulation, allowing time for the levelling to take place. This MFC network is not sensitive to changes in pH or temperature, the presence of surfactants, or other associative compounds, leading to a robust system.

MFC is typically available commercially either as a 2 wt% dispersion or 10 wt% paste in water. Typical dosage levels are between 5-15 wt% and 1-5 wt%, respectively. The 2 wt% dispersion can be readily added under low shear into 1K and 2K polychloroprene, but the downside is the dilution of the adhesive due to the high amount of water introduced.

The 10 wt% paste requires shear (tip speed > 6 m/s) in order to be activated, which causes challenges with the shear-sensitive waterborne polychloroprene. One of the options is to firstly disperse the 10 wt% MFC paste into a shear stable product, such as colloidal silica.5 The shear stability of waterborne polychloroprene dispersions depend on pH. They are typically stable at higher pH (> 11), allowing high-shear dispersion of compounds.

In the present study, the potential as well as compatibility of 10 wt% MFC as a rheology modifier for 2K waterborne polychloroprene dispersion adhesives was evaluated in terms of rheological and adhesive properties.

Commercially available MFC was used in this study, containing 10 wt% MFC, in water.* Two different commercial anionic polychloroprene dispersions were used, with pH 11.5 and pH 12, respectively. The MFC was dispersed into the polychloroprene dispersion under medium shear with a Dispermat® (60 mm blade/2,000 rpm) for 15 min, together with a defoamer.

After mixing, the formulations were filtered through a 200 μm stainless steel mesh filter. The rheology was measured with a Brookfield viscometer (spindle 1/30 rpm), as well as with an Anton Paar rheometer using a bob and cup measuring geometry.


The high viscosity at low shear area can also be seen by dip testing. As shown in Figure 3, wooden sticks were dipped into polychloroprene dispersion with and without MFC. The formulation containing MFC formed a uniform layer on the surface of the wooden stick, followed by sagging or dripping. 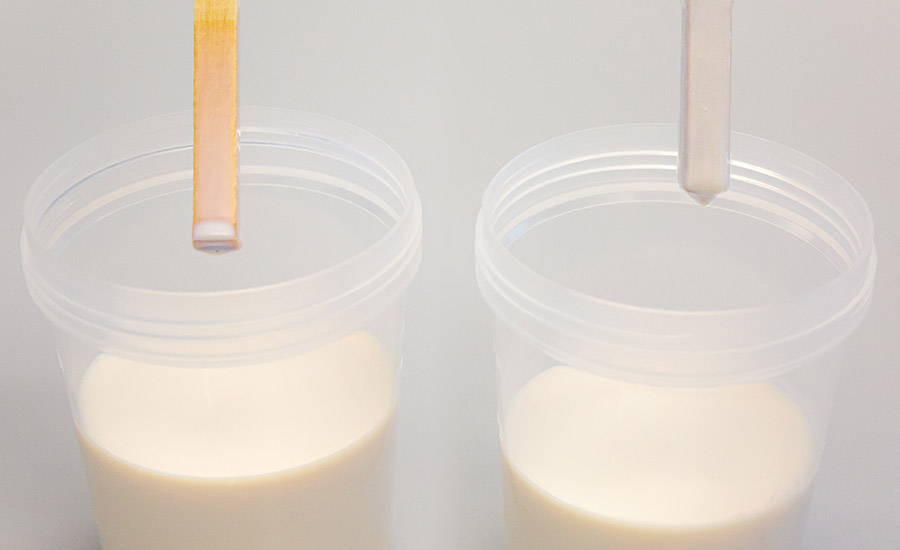 Figure 3. Dipping test using wooden sticks with neat polychloroprene dispersion on left and with MFC on the right.

MFC shows excellent compatibility with high pH (> 12) waterborne polychloroprene dispersion systems. The high shear thinning enables spraying of the product, whereas the high viscosity at rest stabilizes the formulation during storage and transport. The viscosity of the polychloroprene formulation can be adjusted by the amount and grade of MFC.

Note: Opening image courtesy of Sandralise via iStock / Getty Images Plus on GettyImages.com.

5. T. Marwedel, “How to use and understand cellulose fibrils? The practical experience from Covestro,” June 26, 2018, www.exilva.com/blog/how-is-it-acutally-to-use-cellulose-fibrils-hear-covestros-experience.

Otto Soidinsalo is Technical Application Manager with Borregaard.
You must login or register in order to post a comment.