Researcher have developed a process that obtains high-purity ethyl acetate from whey.

In collaboration with TU Dresden, Fraunhofer researchers have developed a process for obtaining valuable, high-purity ethyl acetate from whey. This can be used, for example, to produce environmentally friendly adhesives, thereby replacing conventional ethyl acetate extracted from fossil-based raw materials. It also eliminates the need for costly disposal of the molasses produced during whey.

Every day, large quantities of whey are produced as a by-product of the dairy industry. In Germany alone, this amounts to 12.6 million tons a year. For each kilogram of cheese, for example, 9 kilograms of whey are produced. Some of this is processed further, such as into whey-based drinks with fruit additives or other mixed drinks. The lactose and proteins contained in the whey can also be separated and used in other ways, for example, as a raw material in pharmaceuticals or in baby food. However, once the proteins and lactose have been separated, molasses remains. Disposing of this substance is very complicated and expensive, due to its relatively high salt content.

Researchers at the Fraunhofer Institute for Ceramic Technologies and Systems IKTS in Hermsdorf, together with TU Dresden, have now developed a process for extracting valuable ethyl acetate, a colorless solvent, from the molasses. Ethyl acetate is often used when manufacturing adhesives, printing inks, and varnishes.

Ethyl acetate has traditionally been produced from natural gas and petroleum derivatives. Producing ethyl acetate from whey, on the other hand, results in a product that exhibits easy microbial degradability and is independent of the price fluctuations of natural gas and crude oil. Another advantage: the process developed by TU Dresden and Fraunhofer IKTS renders the need for costly disposal of molasses unnecessary. The separated ethyl acetate offers a high purity of 97.5% and, as such, can be used immediately as a raw material without further processing steps.

In principle, the separation process is straightforward. To begin with, the molasses is fermented in a bioreactor, which is ventilated to allow for aerobic conditions. The reaction forms a gas-vapor mixture that contains ethyl acetate. This is then separated using special composite membranes. “A mixture of gas and water vapor remains as a waste product, which can be released into the environment without issue,” said Marcus Weyd, Ph.D., manager of the Membrane Process Technology and Modeling group. 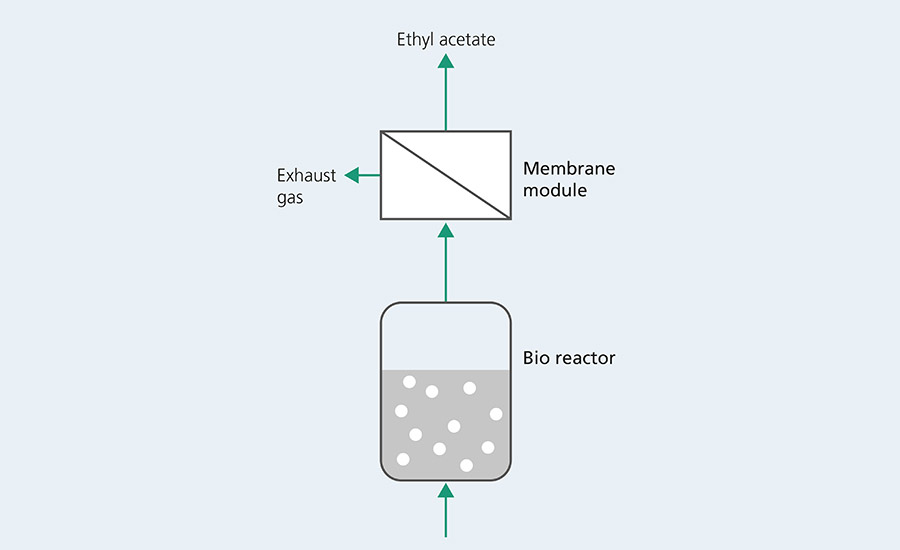 After the molasses are fermented in the bioreactor, the resulting gas-vapor mixture is passed through a membrane module and the valuable ethyl acetate is separated.

In the development of the membrane, researchers at Fraunhofer IKTS contributed their decades of expertise in the field of materials, particularly membrane technologies. The composite membrane, which was specially developed for the process, consists of a combination of polymers and inorganic particles based on zeolite. “We use liquid silicone rubber as a polymer. This is mixed with zeolite (silicalite-1), applied to a supporting polyester fleece and cured. The membrane is only 10 µm thick in total and the pore size is 0.5 nm,” explained Thomas Hoyer, Ph.D., a specialist in the field of zeolite membranes and nanocomposites.

Even if the membrane is equipped with pores, the actual separation process, in which the ethyl acetate is separated, does not work like a sieve. Instead, the gas separation effect is created by interactions between zeolite and ethyl acetate. “The molecules are adsorbed by the zeolite, slide along the pore surfaces, causing them to diffuse through the composite membrane,” explained Hoyer. It is also not necessary to apply high pressure in order to “force” the ethyl acetate through the membrane. “Creating a certain partial pressure difference is sufficient to initiate the chemical reaction and subsequent diffusion.” 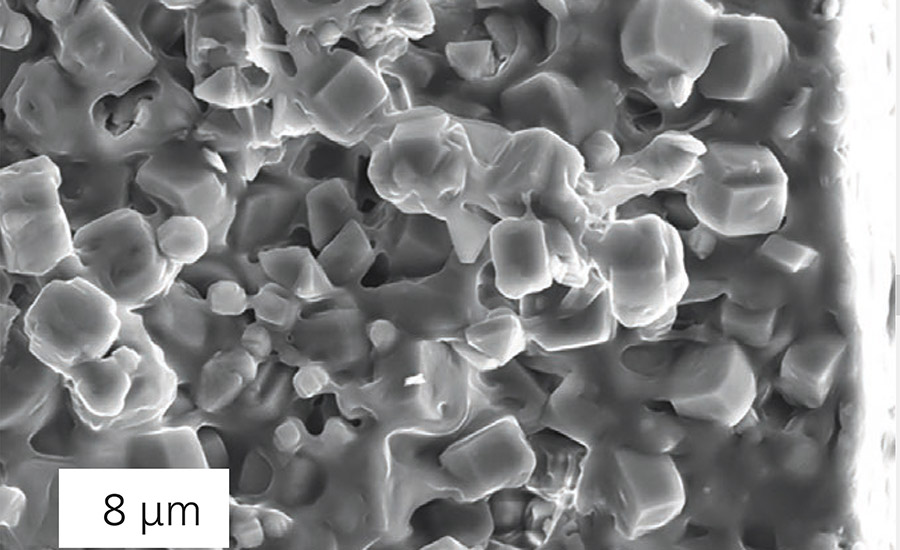 Scanning electron micrograph of a composite membrane. The ethyl acetate molecules diffuse through the pores of the zeolite layer, which are only 0.5 nm in size, to the other side of the membrane.

The idea arose from an initiative of the TU Dresden, which was looking for ways to use the molasses and turned to Fraunhofer IKTS for help. The TU team dealt with the fermentation process, while the Fraunhofer team was in charge of developing and optimizing the membrane technology.

“We have succeeded in producing a highly advanced membrane with extremely small pores through a relatively simple and cost-efficient process,” summarized Weyd. For industrial companies, the fact that the gas separation process consists of only one stage and thus only requires a small number of membrane and control modules is a practical advantage. Once the process parameters for fermentation and gas separation are correctly configured, the separation process runs on its own and in a stable manner. 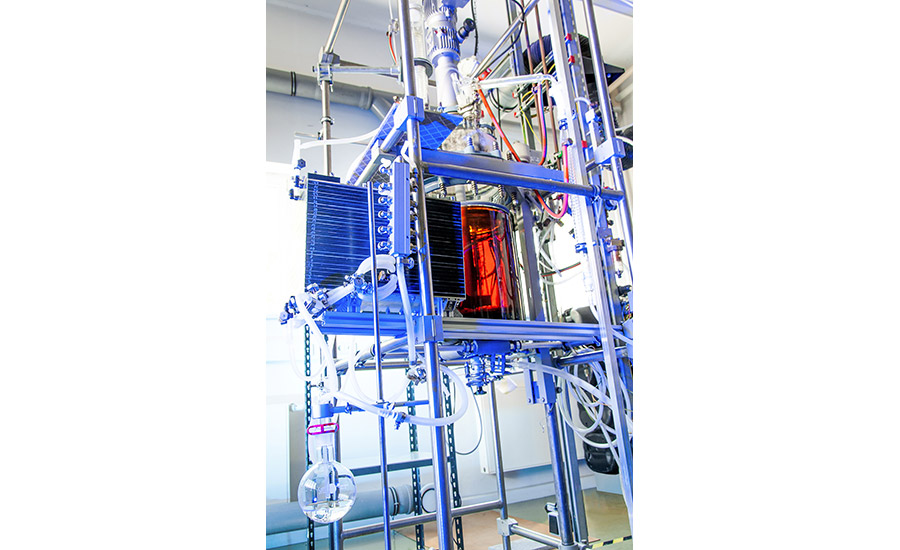 Demonstration plant with a membrane module for separating ethyl acetate from whey molasses.

Next on the researchers’ agenda is scaling the size of the membrane modules in order to make the technology available for industrial use. The technology has more applications than just extracting ethyl acetate from molasses: It can be used in any process that requires separating gas mixtures or filtering out volatile components such as hydrocarbons processing.