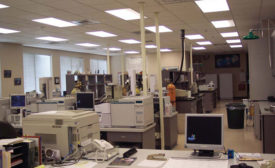 When adhesive tape is found as evidence at a crime scene, it is the forensic scientist’s job to match it to its source with little or no knowledge of tape construction.
John Johnston
No Comments

The criminal element has discovered the thousands of uses for adhesive tape, and it is being found more and more often as trace evidence at crime scenes. By far the most common tape found as evidence in two out of three cases involving adhesive tape is duct tape.