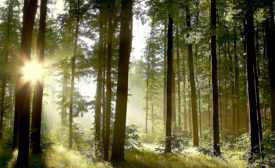 Is it Time to Decouple from Petroleum?

Bio-polymers have entered the market, and demand is expected to grow rapidly over the next decade.
Steven Gailbreath Marc Jackson
No Comments

In May 2009, The Coca-Cola Co. unveiled its new package. According to the press release, the PlantBottle™ is fully recyclable, has a lower reliance on non-renewable resources, and reduces carbon emissions compared with polyethylene terephthalate (PET) plastic bottles. The rest of the press release discusses the environmental virtues of the new package, but dialogue with Coke employees revealed a different (though equally important) driver: “We have been in business for over 100 years and we plan to be in business for over 100 more years. We are taking steps now to reduce our dependence on petroleum-based raw materials.”

The Emergence of Green Chemistry

Marc Jackson
No Comments
This article examines how these trends are likely to impact the future formulation of both adhesives and sustainable materials that can be used to formulate environmentally friendly adhesives.
Read More
Subscribe For Free!
More Videos

IPC APEX EXPO is the largest event for electronics manufacturing in North America, attracting more than 9,000 professionals from 45 countries.

The World Adhesive and Sealant Conference & EXPO (WAC) is the most important international event for stakeholders in the adhesive and sealant industry worldwide.
View All Submit An Event