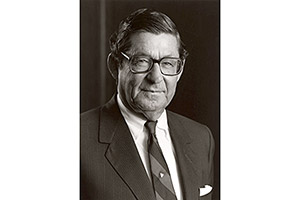 the development of the company into a Fortune 500 enterprise. For nearly 40 years, he was company founder R. Stanton Avery’s partner in entrepreneurship, translating Avery’s inventions—the first self-adhesive labels and label-making machinery—into a fully organized enterprise capable of keeping up with the rapid growth in demand.

“Someone once said our natures were balanced like a well-tuned gyroscope,” Avery said. “I supplied the imagination and Russ the reality that kept us in business.”

At Avery’s invitation, Smith joined his college friend in 1946 as one-third owner, director, vice president and general manager of the Avery Adhesive Label Co. Over the next 40 years, he also served at various times as president, CEO and chairman of the board. In 1983, he was elected chairman of the executive committee of the board and held that position until his retirement from the board in April 1995. He served as a director emeritus until his death.