Handicapping the Field: How Next-Generation Solar PV Materials Will Emerge into the Market

The search is on for materials platforms that improve the conversion efficiency of solar panels.

The solar panel industry now seems back on track following the boom-and-bust period. The sector is still dominated by crystalline silicon (c-Si), but the current upswing means that the search is on once more for materials platforms that improve the conversion efficiency of solar panels. Efforts have been rebooted to hone 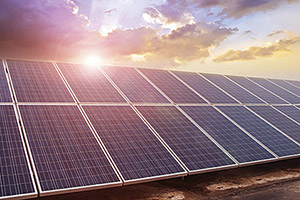 and ultimately commercialize these next-generation materials.

Some are close at hand, such as novel approaches to doping silicon panels. Meanwhile, the thin-film photovoltaic (PV) sector continues to seek success against entrenched c-Si; this could come from improvements to cadmium telluride (CdTe) and copper indium gallium selenide (CIGS), while other thin-film materials are beginning to receive serious commercial attention. The solar industry also is beginning to think out of the box with a slew of entirely new nanomaterials such as quantum dots, nanowires, nanotubes and graphene.

The need for better c-Si technology has urged a more aggressive roadmap based on advanced c-Si technologies. Prominent technologies gaining traction include n-type cells, back-contact cells, selective emitter options, wrap-through variants and cells with rear side passivation. Researchers anticipate a scaleup to volume production will occur in 2015, when investments are expected to pick up. The materials market value for advanced c-Si is currently forecast jump from $16 million in 2014 to $115 million in 2016, and to top $1.5 billion by 2020.

Although suppliers in Taiwan, the U.S. and Europe have shown signs of adopting higher-efficiency c-Si technology, greater adoption in Japan and bigger involvement of Chinese players will be significant to facilitate the migration of standard c-Si technologies to the advanced forms.

Standard thin-film PV has found it hard to compete with conventional c-Si’s relentless cost cuts, pricing pressure and efficiency improvements. Part of the answer for thin-film PV lies in multi-junction PV cells to use more of the available solar spectrum. Other avenues include addressing markets where c-Si has disadvantages, such as certain low-light and hot outdoor environments, and in building-integrated photovoltaics (BIPVs). Given the ambitious roadmaps of current thin-film leaders, active commercial developments may be expected in 2015, as the cost difference between the standard C-Si and existing thin-film technologies narrows. This is especially important as the solar industry shifts toward remote and unsubsidized markets.

Various thin-film technologies are being pursued. CdTe PV cells currently pose a strong challenge to multi-Si cells in terms of efficiency, and should find acceptance in constrained spaces and other related industrial applications. Novel and cost-effective approaches for doping, back-contact formation, and printing will be key. Commercial progress with CIGS has been slow due to processing complexities and encapsulation concerns. In terms of efficiency, however, CIGS is now tantalizingly close to that of single-crystal PV; and new production approaches and methodologies illuminate a path to beat Si-based PV technologies in cost terms. Other emerging thin-film candidates include: CZTS, a CIGS variant with a different absorber material; CdMgTe, a II-VI semiconductor alloy; and pyrites. Collectively, NanoMarkets sees emerging thin-film PV as fledgling in the near term, cracking the $120 million barrier at the far end of our eight-year forecast window (to 2021).

Organic photovoltaic (OPV) cells have been the focus of much research, as they are lightweight, flexible, inexpensive, highly tunable and potentially disposable. Their main advantage is a high absorption coefficient coupled with the use of low-cost, high-throughput manufacturing techniques such as inkjet printing and roll-to-roll. Despite the improving performance of OPV cells, urgent needs remain: developing large-area monolithic panels, reducing defect density and improve yields, and devising better encapsulation systems to improve OPV module lifetime to at least 10 years.

Researchers think OPV modules need to demonstrate closer to an 8% efficiency level and 10 years of lifetime—and ultimately reduce module production costs below $0.50/watt—within the next five years to be competitive in the marketplace, first in DC portable power devices followed by BIPV applications. Part of this process will involve commercialization efforts through industry joint-collaborative projects, and a specific OPV material-related IP ecosystem with a sea change of newer players bringing out new materials, such as narrow optical gap photoactive polymers.

Perhaps the most excitement around solar PV materials concerns perovskite, which in just a few short years has achieved efficiency improvements unlike any other solar PV material—from breaking the 10% barrier in 2012 to 15% in 2013 and nearly 20% this year, and likely as high as 30% before being commercially rolled out. NanoMarkets sees important ramifications from perovskite’s unprecedented trajectory for one specific market segment: dye-sensitized solar cells (DSC). Several key DSC firms already have been at the forefront of the perovskite solar revolution. A great deal of research continues into perovskite materials optimization and processing techniques. It is indeed possible that perovskite PV cells could quickly ramp to and beyond the 20% mark, and compete against the more established Si counterparts within the next several years. NanoMarkets sees enough positive signs from this segment of emerging PV—OPV, DSC, and perovskite—that researchers think it could begin to rival that of aforementioned advanced c-Si by the end of the forecast period, topping $1.1 billion in materials market value.

Further along the solar PV technology roadmap are a number of nanomaterials that present various attractive options, but with challenges that continue to slow their development toward commercialization anytime soon.

Silver nanowires offer the potential to replace traditional electrode materials due to their intriguing electrical, thermal, and optical properties: an inherent low resistivity, high specular transmittance, superior flexibility, and surface plasmon resonance effect. Despite substantial progress, however, they have yet to find commercial use as efficient transparent electrodes that can boost energy conversion efficiency to realistic levels, still demonstrating efficiency below 10%.

Quantum dots are considered one of the most attractive candidates for solar PV, thanks to inexpensive low-temperature solution processing techniques and a theoretical energy conversion efficiency of up to 45%. Actual efficiency, however, is still below 10%, so commercial viability is still a long way off. On the other hand, there’s still room for improvement, including ways to pair QDs with other suitable PV materials as co-absorbers in PV cells

Carbon nanotubes (CNTs) are gaining broad interest for their unique properties that can be used effectively for PV solar cells: easy and inexpensive to manufacture, stable and durable, and both good light absorbers and electrical conductors. CNTs have shown PV cell energy conversion efficiency of up to 80% via an efficient charge transport mechanism inside the cell, and recent advances allow greater level of control over their chemical makeup. In fact, CNTs could be on track to be commercially ready before quantum dots, but that is a relative assessment; researchers feel they are still unlikely to be commercialized for PV applications anytime soon.

Graphene, in the case of PV applications, has shown promise as an absorber and photoactive layer with extreme conductivity and transparency, as well as an affinity to keep its properties even after being coated with another conductive material (e.g., silicon or copper). Research initiatives around its use in PV applications have shifted from treating graphene as a substitute for ITO (in transparent electrodes) to viewing it as a potential conduction layer candidate in the next generation of PV cells. There is a possibility of using it in combination with titanium dioxide as a charge collector, keeping perovskite material as the sunlight absorber in PV cells. Under such an arrangement, cell efficiency of 15.6% has been achieved.