The Next Generation of Static Mixing Nozzles 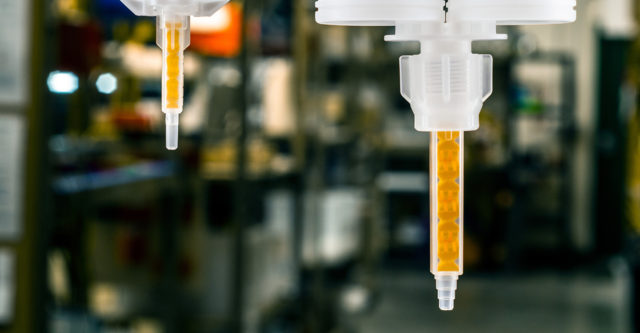 The Next Generation of Static Mixing Nozzles

Manufacturers are beginning to appreciate how much mixing nozzles cost their operations. Accounting for both purged and retained adhesive volumes, conventional helical and square mixers waste as much as 20 mL of adhesive with every nozzle. Making matters worse, over-optimized supply chains have left entire industries waiting on overseas shipments of these critical nozzles to resume production.


A new generation of mixing technology now offers solutions to both the issue of material waste and availability. Advancements in computer simulation have unlocked smarter geometries that improve mixing while incurring 75% less waste. And thanks to advancements in additive manufacturing, U.S. production of these nozzles offers a robust alternative to traditional supply chains. These improvements are causing a tidal shift in how manufacturers dispense two-part adhesives.

Helical mixing nozzles utilize a type of mixing called the baker’s transformation. Mimicking the way bakers knead flour into dough, these first-generation nozzles work by successively doubling fluid striations across each mixing element. This method typically requires 24 to 32 helical elements to adequately mix two-part adhesives. However, with every mixing nozzle wasting adhesive proportional to their total length, requiring these many elements incur heavy costs on end-users. 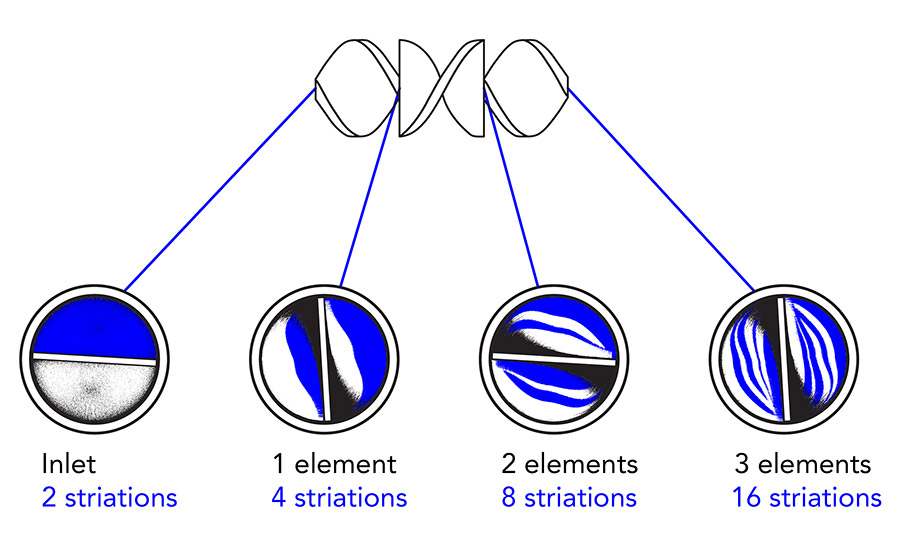 
Motivated by Six Sigma initiatives in the early 2000s, efforts were made to develop a less wasteful alternative to helical mixers. These efforts spawned square alternatives to the helical design. While shorter than their helical counterparts, second-generation square nozzles still rely on the baker’s transformation and, therefore, still require 24 to 32 elements to achieve adequate mixing. Because of this inherent limitation, most square mixers only reduce adhesive waste by 7% compared to their helical counterparts.

Counting fluid striations following each element offers a simple way to compare the efficiencies of different mixer designs. As shown in both first and second-generation designs, 16 striations are generated after three mixing elements. 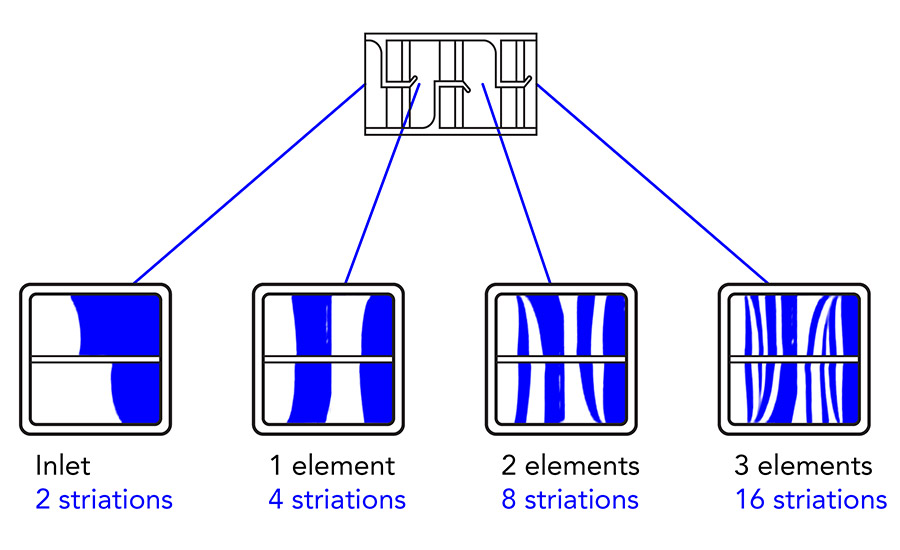 Efforts to improve efficiency were revisited in 2016. By recognizing that gains in mixer efficiency would require a fundamentally new class of chaotic advection, a novel discrete-time parameterized model of fluid mixing was developed..

Historically speaking, advection models are first proposed analytically and later described numerically. However, in 2016, armed with powerful new CFD packages and machine learning techniques, the traditional model of discovery was flipped on its head. After developing a simulation environment matching known market applications, thousands of virtual geometries were recursively and automatically generated and analyzed. In effect, a Darwinesque metaheuristic was developed to discover a new class of higher-order chaotic mapping from a process that resulted in over 6,000 discrete simulations. The result became a new method of fluid mixing called the xemex transformation. Unlike the baker’s transformation, where each element offers a two-fold increase in the number of generated striations, the xemex transformation offers a 10-fold increase per element. This new method offers an exponential increase in efficiency over existing static mixer designs.

When implemented for mixing two-part adhesives, the xemex transformation achieves optimal mixing with 75% fewer elements. What might have required 32 first or second-generation mixing elements can now be achieved in as few as seven elements utilizing the xemex transformation. Thus, while improving adhesive performance, third-generation mixing nozzles utilizing this new transformation take significant costs and waste out of customers’ processes. With the number of folds per element limited only by manufacturing constraints, future implementations in larger continuous-flow reactors, such as PFRs, offer even greater gains in efficiency over existing industrial mixer designs. 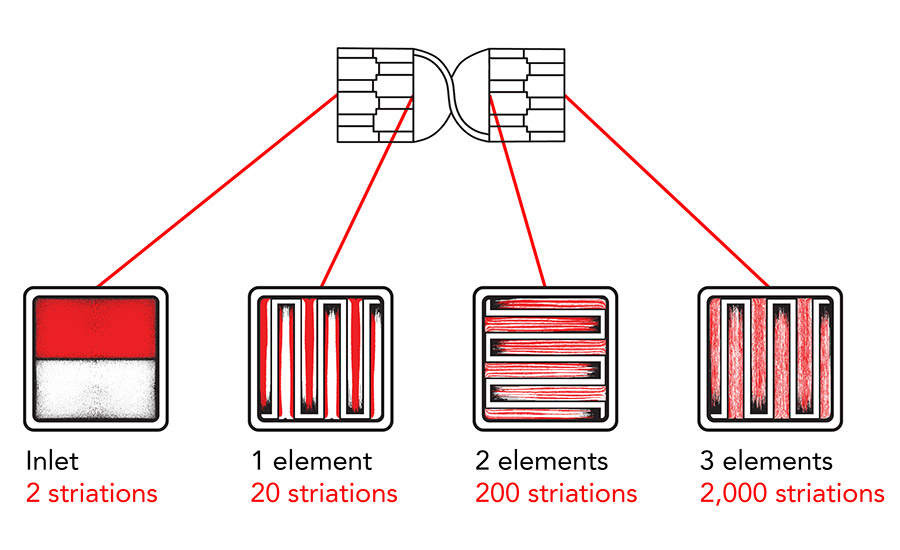 While numerical analysis offers a great way to compare mixer transformations, real-world performance ultimately relies on empirical data. Building from a raft of simulation-driven geometries, nearly a thousand additional hardness experiments were conducted per ASTM D2240-15. While validating the xemex transformation for use with 2k adhesives, these experiments also aided in selecting a single mixer design that could accommodate the greatest number of market applications. 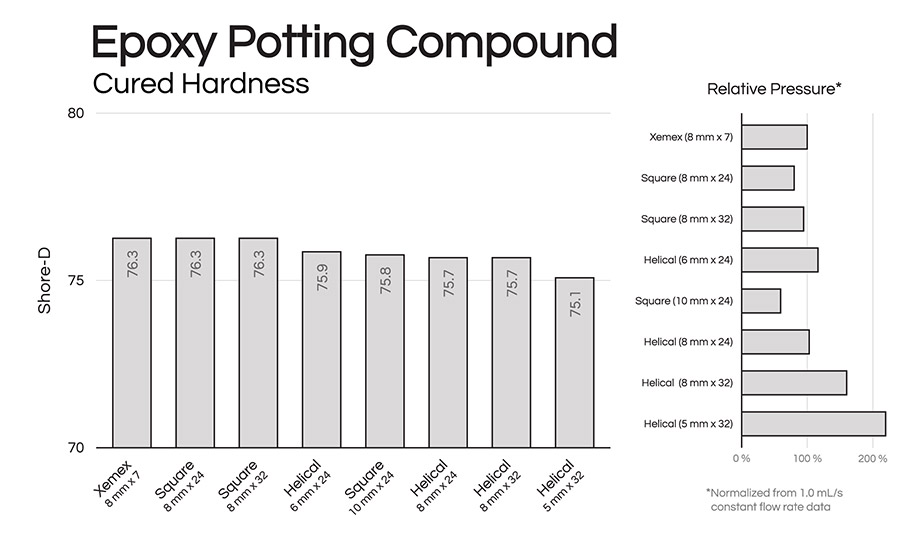 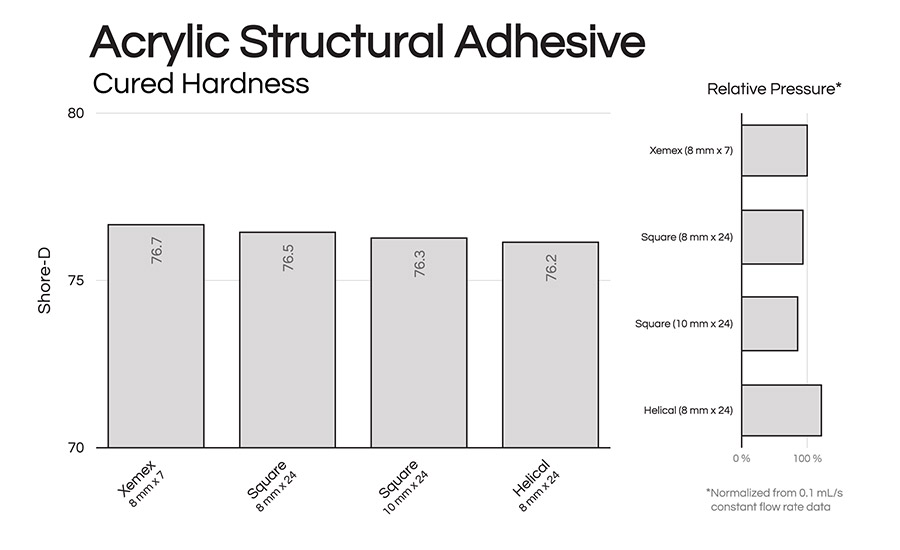 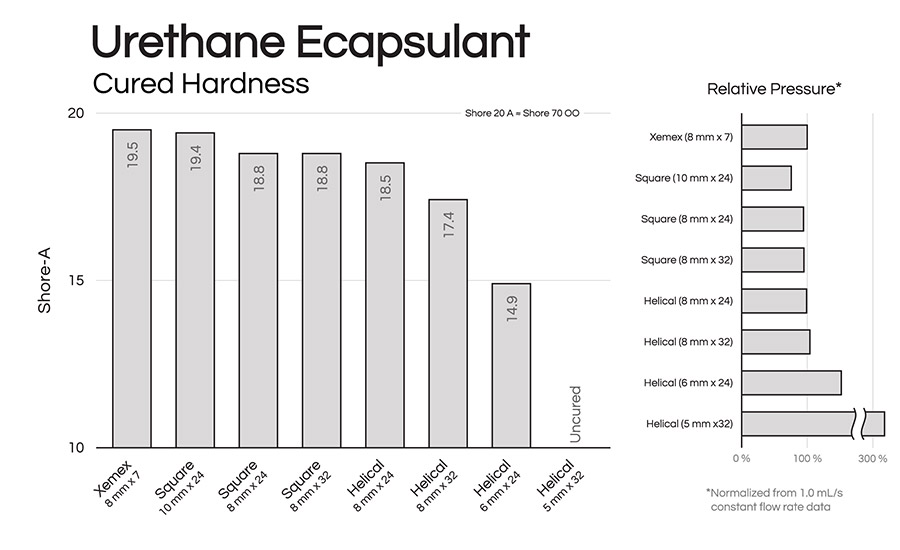 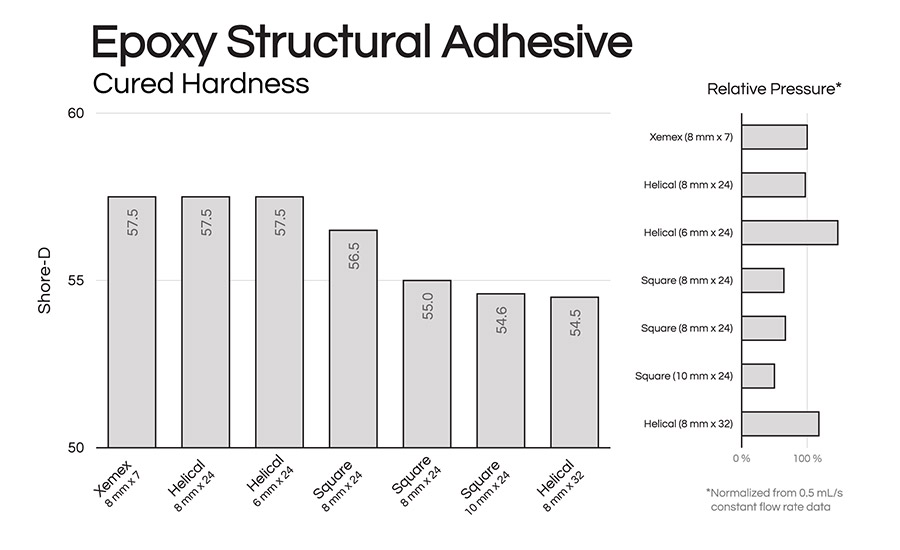 Designing a DOE for this final stage of development was its own optimization challenge. Capturing the full breadth of market applications had to account for adhesive-specific variables, along with non-linear adhesive properties: disparate viscosities, mix ratios, heavy filling, highly exothermic, thixotropic, etc. By working with over 80 industry experts, variables were rank-ordered by occurrence so that a market-optimized testing sequence was determined.

The results found in subsequent experiments allowed for the development of a final mixer geometry that was well balanced across the entire market landscape. Through these experiments, it was also confirmed that “element count,” a term commonly used in industry to convey mixing capability, has become an erroneous method for reliably selecting a mixing nozzle for a given application. It is far more reliable to compare mixer options using direct empirical data. Extrapolations beyond this are best reserved for formulations of the same type and mix ratio, while maintaining within +/-25% component viscosities and +/-50% flow rates from the original empirical results


To help convey this data, a standard white paper format was developed to lay bare empirical results of common mixer geometries across popular adhesive formulations. And while it is the end-users’ sole responsibility to validate any mixer design for their own applications, these results provide a useful guide when approaching new applications. Generic previews of this data are provided in the figures shown; however, a full listing of these reports is published on the Re Mixers, Inc. website (www.remixers.com/white-papers).

Third-generation nozzles offer a number of inherent advantages over previous technologies: improved mix quality, closer proximity to work surfaces, and accurate positioning in automated systems. And while third-generation nozzles also take 75% of retained adhesive costs out of customers’ operations, their potential to meet goals in achieving a circular economy is arguably their most compelling advantage.

Even at the customer-level, adhesives waste caused by traditional nozzles is significant. Since it is regularly advised that mixers are purged by an amount equivalent to their internal volume before use—which is then doubled in retained volume after use—first- and second-generation mixers waste an average of 19.1 mL with every nozzle. By reducing this amount to 5.0 mL, third-generation nozzles offer such increases to material efficiency that their first- and second-generation counterparts could be sourced for free while still justifying the buy-in to this newer mixing technology.

Even a moderate manufacturer may consume up to 1,000 mixing nozzles annually. By upgrading to third-generation technology, this same manufacturer would remove 14,100 mL of material waste from their operation every year. While significant, the potential for sustainability becomes even more astounding when viewed on a global scale. With an estimated global usage of 500M nozzles every year, the opportunity to transition towards a sustainable future with third-generation nozzles is immense. By weight-averaging all mixer variants and connection styles according to their use, a global upgrade to third-generation mixing technology offers the removal of 13.42M pounds of adhesive waste every year.

By combining the strength of injection molded housings with the modularity of 3D printed inserts, Re Mixers’ facility in Madison, Wisconsin is rewriting what was thought possible with additive manufacturing. With millions of units being added to this facility’s annual capacity every month, Re Mixers is on track to become the world leader in total additive manufacturing output in 2023. 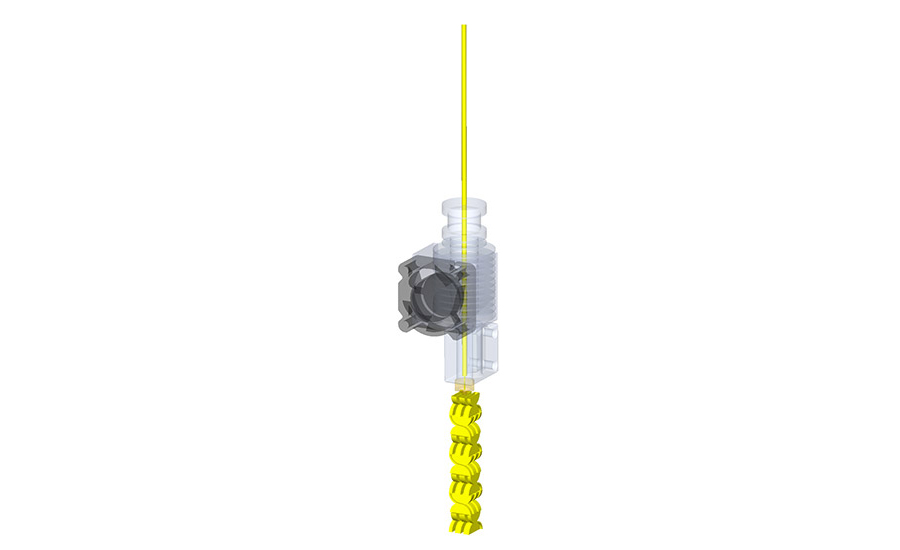 While reshoring jobs, this new approach offers unprecedented supply chain reliability. As labor shortages and supply-chain issues wreaked havoc on traditional manufacturers over the last three years, Re Mixers has not experienced a single manufacturing disruption.

Images courtesy of Re Mixers, Inc.

Eric Ronnin is the President and CEO of Re Mixers, Inc.