Diamide-Based Organic Thixotrope: An Alternative to Fumed Silica in Adhesives and Sealants

Silyl-terminated polyurethanes (SPUR) are the basis for numerous adhesives and sealants used worldwide. The high performance of this hybrid technology is a result of the synergy between the silane-curing mechanism and polyurethane backbone.1 SPUR polymers generally cure at room temperature and offer good durability.

One of the major requirement of sealants is to have a certain thixotropic behavior, resulting in sag-specific properties for successful practical application. The thixotropic agent predominantly used in adhesives and sealants is fumed silica. In addition to thixotropy, fumed silica provides reinforcement and mechanical properties. Although fumed silica contributes to the required structure-imparting properties, it does bring a number of limitations. One of the major disadvantages is the very fine dust nature of the material, which makes it unpleasant and difficult to handle. Another drawback is the requirement for high-shear, capital-intensive dispersion equipment for adequate incorporation.

Consequently, alternative solutions have been sought for many years, including a recently developed technology that is based on diamide chemistry.* The diamide-based thixotrope offers the following benefits against traditional rheological additives:

In this study, the performance of the diamide-based organic thixotrope was evaluated against fumed silica in both pigmented and non-pigmented systems. SPUR-based prepolymer was selected as the base resin. Various loading levels of the diamide-based thixotrope and fumed silica were considered in order to understand the influence on rheological, practical, and mechanical properties. Table 1 details the formulations used for the pigmented and non-pigmented SPUR-based sealants. 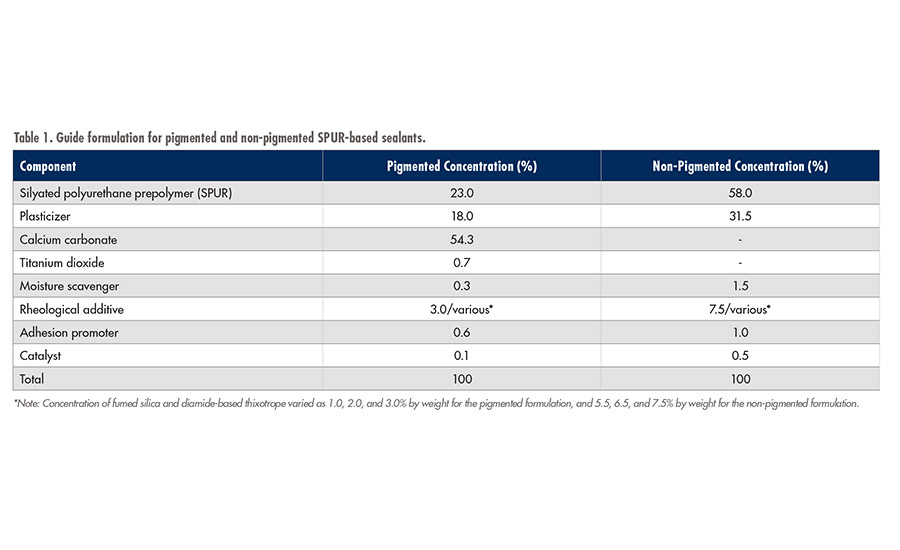 The diamide-based thixotrope needs to be activated in the system; it starts activating at around 50˚C. As the temperature increases, more rheological performance is achieved. In the current system, good rheological performance was achieved in a range of 65-70˚C. (Depending on the polarity of the specific system and the solvent used, temperature ladder studies should be conducted in order to realize best performance.)

The diamide-based thixotrope functions by forming a three-dimensional network after proper activation. Once fully activated, the molecules orient themselves toward each other, forming a fibrillar structure due to the nature of the amide functionality.3 Intermolecular interactions such as hydrogen bonding and Van der Waals forces are responsible for this formation backbone.

Non-associative by nature, the diamide-based thixotrope does not require the presence of pigments or fillers to function. As a result, it can be used in both non-pigmented and pigmented systems.

Extrusion rates were tested in accordance with ASTM C 1183-04. The test consists of extruding the sealant from a cartridge equipped with a 3-mm orifice nozzle using a pneumatic gun at 40 psi and measuring the grams extruded in 1 min at ambient temperature. For the sag tests, aluminum U-profile channels were filled with sealant up to 12 cm and placed in a vertical position. Sag was measured in millimeters from the channels after 1 hr at ambient temperature. 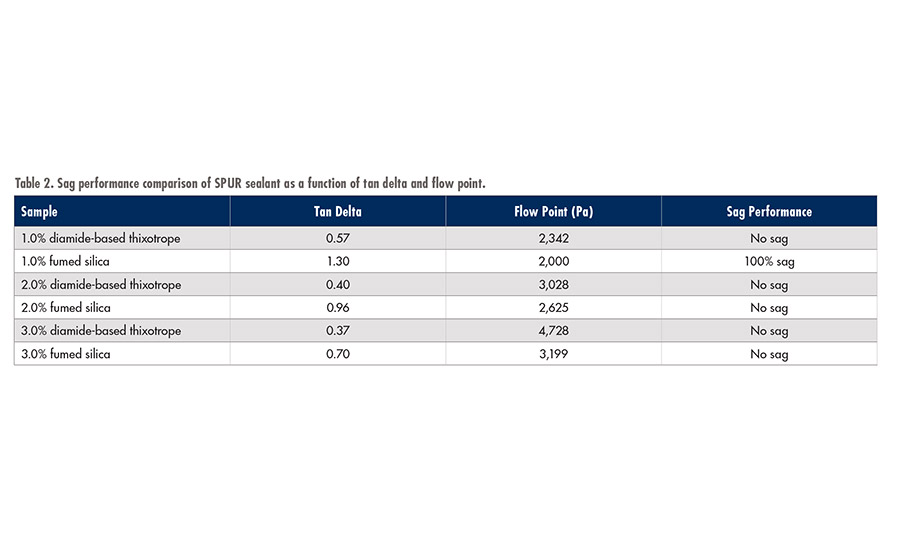 Both rheological modifiers were incorporated along with all other ingredients (see Table 1) in a vacuum-controlled speed mixer for up to 5 min at 2,200 rpm. The temperatures achieved for all samples were recorded at between 64-70˚C.

With increasing loading, the viscosity is increased for both rheological modifiers. At all loading levels, the diamide-based thixotrope showed significantly higher efficiency in comparison to fumed silica.

Extracted from the flow curve, Figure 2 compares the low shear (0.1 s-1) and high shear rate (100 s-1) viscosity of both of the rheological modifiers. It is clearly visible that the diamide-based thixotrope outperforms fumed silica at all loading levels and provides more performance.

A sealant’s yield point is a direct gauge of its practical applicability. Measuring the yield point is a direct measure of how much force is needed to initiate movement and start the material flowing. If the concentration of rheological additive is too high, the compound can only be processed to a certain extent because of its high viscosity. Hence, it is important to keep the concentration to an optimum level in order to have a better extrudability.

Figure 3 illustrates the direct correlation between yield point and extrusion rate. The higher the yield point, the lower the extrudability.

As the loading level of both of the rheological modifiers increases, the thickening effect increases and the sealants’ extrudability drops as a result of the higher viscosity and higher yield point. At 1.0% loading, both modifiers showed a higher extrusion rate (88 and 74 g/min, respectively), which is not considered ideal from a practical point of view. An extrusion rate around 30-35 g/min is considered ideal for application. 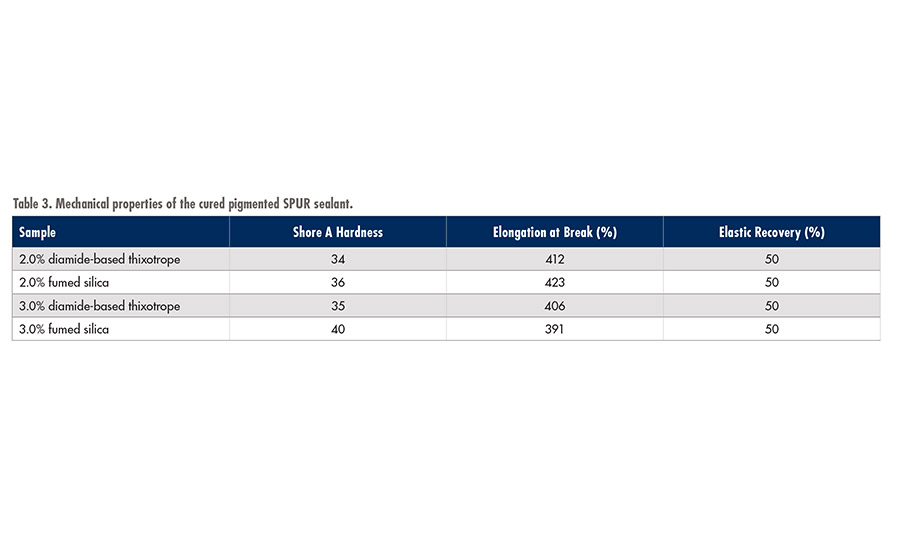 Structural recovery tests (ORO) provide the application-specific assessment of a sealant after it is applied. The most important part in this test is the step from structure decomposition at a high shear of 100 s-1 (interval two) to small amplitude oscillation (interval three), as shown in Figure 4. This is a direct simulation of the movement due to the pressing out of the cartridge and the behavior directly after the force is removed.

A tan delta value of higher than 1 indicates the viscous modulus dominating over storage modulus, which means the sample will start flowing. Figure 4 compares the tan delta of both rheological modifiers at various loading levels, along with sag behavior measurement values.

In addition to tan delta, flow point is another parameter related to a material’s sag stability. Flow point (G’=G’’) was extracted from the amplitude sweep and compared with the sag values in Table 2.

Fumed silica with 1.0% loading showed higher tan delta (1.30) and also the lowest flow point. As a result, no sag stability was observed; the sample had completely run out of the channel (see Figure 5). However, at a similar loading level, the diamide-based thixotrope showed lower tan delta and higher flow point. Hence, no sagging was observed. Subsequent increases in the loading level of both modifiers improved the rheological and anti-sag properties.

Increasing the loading level showed no significant effect on the mechanical properties in this formulation. Elongation at break and Shore A hardness were only marginally affected in the chosen formulation. 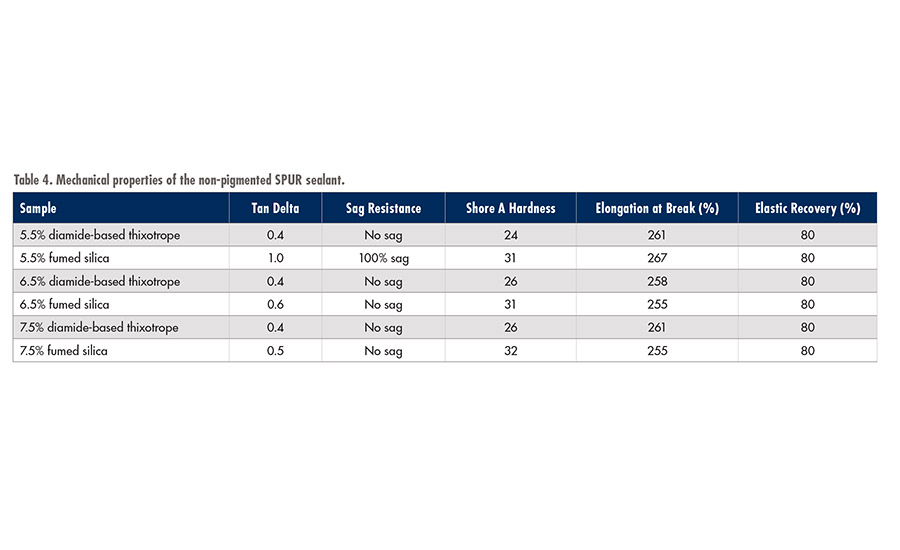 To describe the influence of both rheological modifiers on the properties of non-pigmented SPUR sealants, the loading level was varied (see Table 1). All samples were prepared with the high-speed mixer for up to 4 min at 2,200 rpm. The temperatures achieved for all samples were recorded between 65-70˚C.

Figure 6 shows the differences in the rheological performance (return flow curves) obtained with various loading levels of both modifiers. As the loading level increases, the viscosity increases considerably. This is clearly evident from the flow curves. Moreover, the diamide-based thixotrope showed more efficiency in comparison to fumed silica at all loading levels, illustrating its higher rheological effectiveness in non-pigmented systems as well.

Extrudability in Relation to Yield Point

Yield point increases as the concentration of both modifiers was increased. The diamide-based thixotrope showed a significantly higher yield point and consequently lower extrusion rates at all of the loading levels. With its higher efficiency in comparison to fumed silica, the diamide-based thixotrope offers formulators the ability to adjust the extrusion rate as needed and at significantly lower loading level than fumed silica.

Table 4 details the application and mechanical properties of SPUR sealant formulated with both rheological modifiers. All samples with the diamide-based thixotrope showed a lower tan delta after the structure decomposition rheological tests. On the contrary, fumed silica with 5.5% loading displayed higher tan delta after the structural decomposition depicting its fluid behavior. This was also evident from the application test, as it completely ran out of the vertical channel.

As the loading level of fumed silica increased to 6.5 and 7.5%, lower tan delta values were obtained, representing its elastic response after the structural decomposition (also correlates well with the application behavior). A point of interest is that in all tested samples with various loadings, mechanical properties of relatively even quality were obtained.

A new diamide-based thixotrope has shown excellent rheological performance and outperformed fumed silica in both pigmented and non-pigmented SPUR-based sealants. Its influence on mechanical properties is marginal. Formulators can readily adjust the rheology of SPUR-based sealant with this diamide-based thixotrope for their required application properties.

For additional information, contact the lead author at (49) 221-2923-2030 or vimal.saini@elementis.com, or visit www.elementis.com.

The authors would like to thank lab colleagues Anja Wingerath, Wolfgang Fuchs, Parwis Adli, and Sebastian Heinz for their help and support during this work.