The chemistry of an atmospheric plasma surface treatment must be adopted to the targeted process. 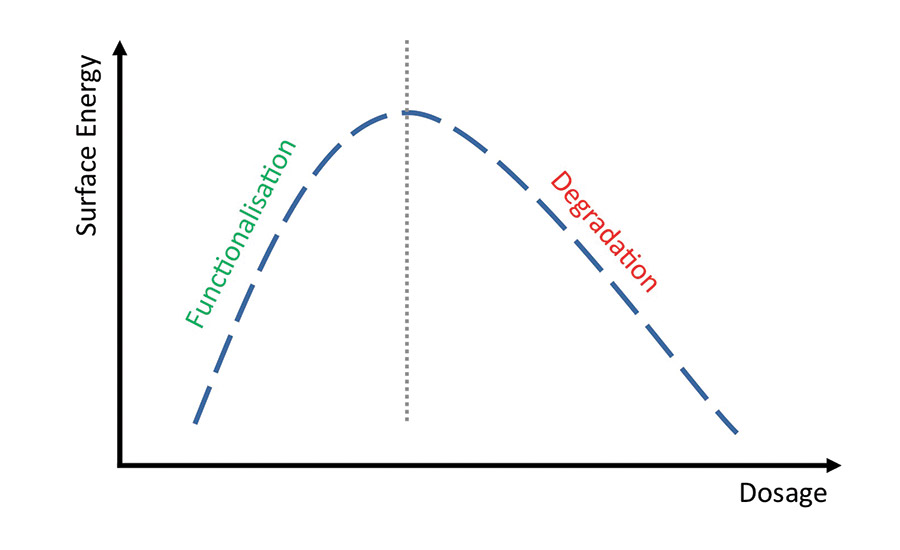 Figure 1. Illustration of the competition between functionalization and degradation of the material during corona treatment.

Atmospheric plasma treatments enable users to selectively modify the surface composition of most materials by grafting functional species that can mimic the reactive groups found in primers. The main advantage of plasma treatments is that they do not require solvents or drying steps, which results in a significant reduction of the environmental impact of the process, as well lower operating costs.

Atmospheric plasma treatments have been hailed as a game-changing technology that will revolutionize surface treatment. However, due to a number of factors, they are still seldom used on an industrial scale. First, atmospheric plasmas have probably been oversold—there is no magical plasma recipe that will work on every substrate for all applications. The chemistry of the treatment must be adapted to the targeted process. The chemistry to improve the adhesion during PEEK metallization is not the same as the chemistry needed to improved adhesion of a PP film to an epoxy. A lack of understanding of the chemical and physical process can make atmospheric plasmas difficult to control. Finally, they are too often seen as a replacement for corona. 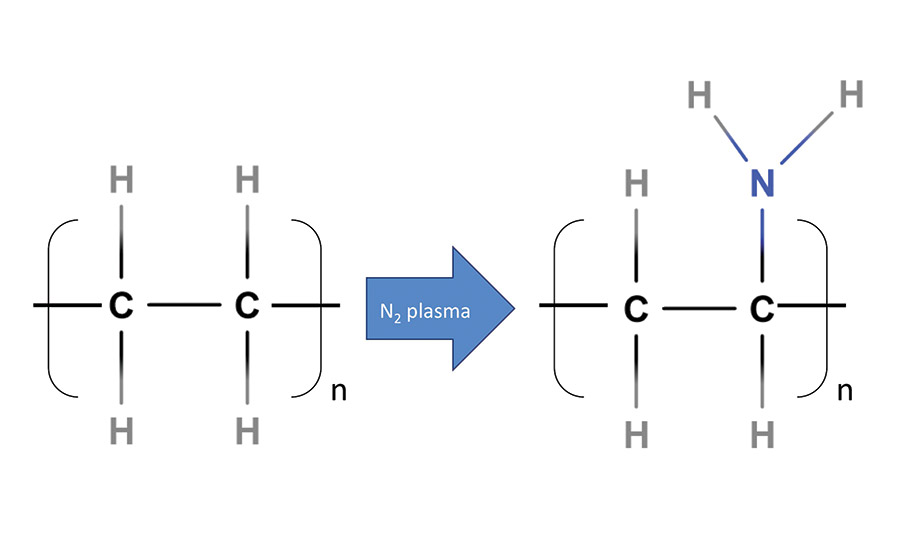 Figure 2. Schematic of grafting treatment onto PE by N2 plasma.

Corona is a plasma in air with no control of the chemistry. Corona equipment does not require an advanced gas injection system or continuous injection of gases during the process; therefore, the total cost of ownership is lower than that of atmospheric plasma. Corona chemistry is dominated by the highly reactive oxygen species, leading to a strong oxidation of the surface. Too much treatment damages the surface. Corona can be seen as a controlled destruction of the surface and is limited by the optimal condition that allows maximum modification with minimal degradation (see Figure 1).

In contrast, atmospheric plasmas use a controlled atmosphere, usually based on nitrogen, to modify the materials. The plasma gas is also used to purge the plasma zone of oxygen and other contaminants. To be able to control the chemistry inside the plasma, it is crucial to decrease the concentration of oxygenated species (mainly O2 and H2O) as much as possible. Oxygenated species are so reactive in a plasma that they dominate the chemistry and prevent any control. This requires an advanced gas injection system and excellent control of the gas flow inside the reactor. 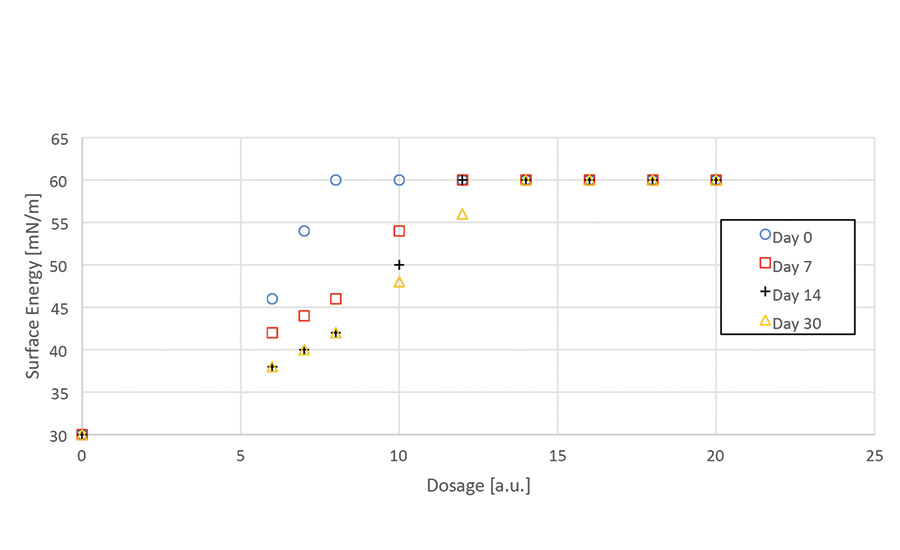 Figure 3. Evolution of the surface energy of a BOPP film as a function of dosage and aging.

A corona is done in an atmosphere with roughly 20% of oxygen and 80% of nitrogen, yet the surface chemistry is 100% oxygen based. Once the atmosphere is controlled and no oxygen is present in the plasma zone, the chemistry of the plasma can be controlled by adding dopants to the plasma gas. The level of oxygen in the plasma zone should be below 50 ppm in order to have a good control of the chemistry. The dopants can be gases or evaporated liquids mixed with the plasma gas. Depending on the type of dopant used, two main classes of treatments can be distinguished: grafting and coating.

Grafting occurs when non-polymerizable gases, such as H2,1 NH3,2 and CO2,3 are used as a dopant. Grafting is a chemical modification of the material surface. A simple example would be a polyethylene (PE) film modified by a nitrogen plasma (see Figure 2). 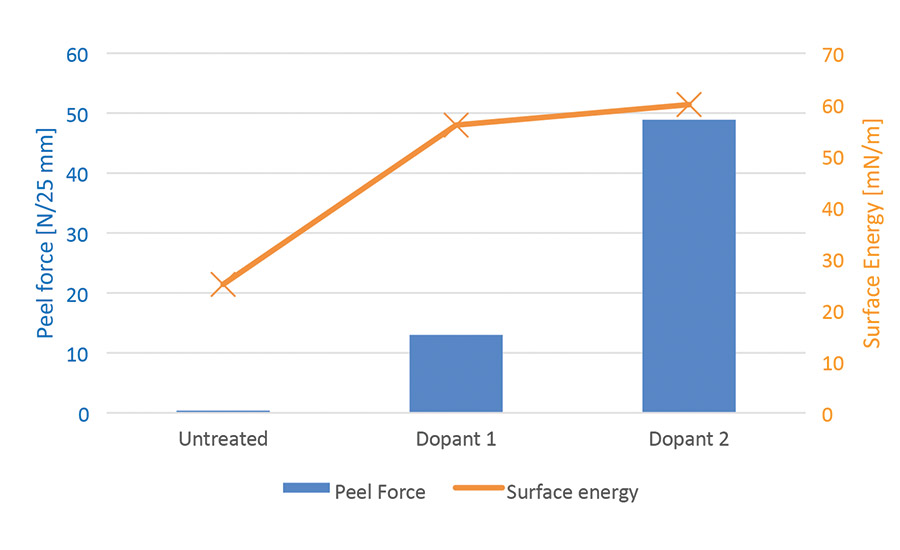 Figure 4. Comparison of peel force and surface energy for an ECTFE sample treated with two dopants.

The reality is a bit more complex; due to the high reactivity of the plasma state, a multitude of functional groups are grafted onto the surface. A N2 plasma will graft a mixture of amine, amide, and imide functions. Post oxidation can also occur once the product exits the controlled atmosphere of the plasma, resulting in the formation of oxygenated functions. However, the addition of dopant gases enables users to graft certain types of functions, thus providing more control over the chemistry.

Coating occurs when polymerizable molecules (called monomers or precursors) are used as a dopant. The process is known as atmospheric pressure plasma-enhanced chemical vapor deposition (AP-PECVD) or atmospheric pressure plasma-assisted chemical vapor deposition (AP-PACVD). A well-documented example of AP-PECVD is the use of hexamethyldisiloxane to deposit SiOx coating.4 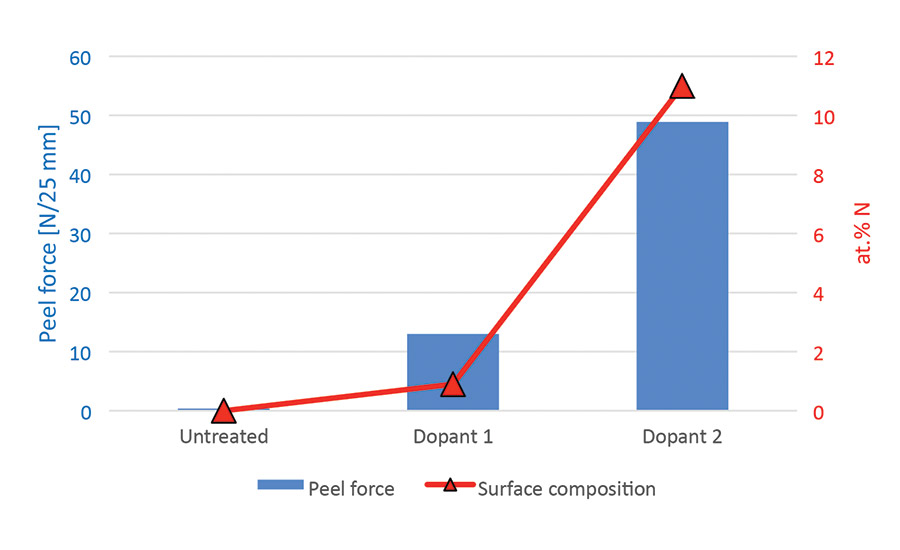 Figure 5. Comparison of peel force and amount of nitrogen grafted onto the surface (determined by X-ray photoelectron spectroscopy) for an ECTFE sample treated with two dopants.

Coating initially seems much more powerful than grafting, but its use is limited by multiple challenges, including powder formation, incomplete curing, and electrode fouling (i.e., deposition on the electrodes). Powder formation occurs when the reactivity of the plasma is too high. The precursor will then react in the gas phase, which leads to the deposition of a powdery coating instead of a dense one. When the reactivity of the plasma is too low, incomplete curing occurs; this results in a tacky/oily coating deposition. The plasma reactivity is influenced by multiple factors, including precursor reactivity, precursor concentration, and plasma power.

Electrode fouling occurs when deposition takes place on the electrode. It can degrade the treatment quality over time as the coating accumulates on the electrodes. Regular maintenance of the reactor is required to clean the electrodes. This can be minimized by a careful control of the gas flow, allowing for a low concentration of precursor close to the electrodes. Most of the previously mentioned parameters are linked together, so it should be clear that AP-PECVD is a complex process that requires thorough knowledge and control of the plasma physics and chemistry to be mastered. Nevertheless, recent advances in the field make it possible to use AP-PECVD for industrial applications.

Grafting is used to modify the surface composition of materials in order to make them compatible with glues, inks, or various coatings. The main advantage of atmospheric plasma is the availability of multiple chemistries and modification/customization according to the specific requirements of a particular application. It should also be noted that since plasma treatments are usually done in non-oxidative conditions, the treatment does not degrade the polymeric chains. This results in a stable treatment with no aging. 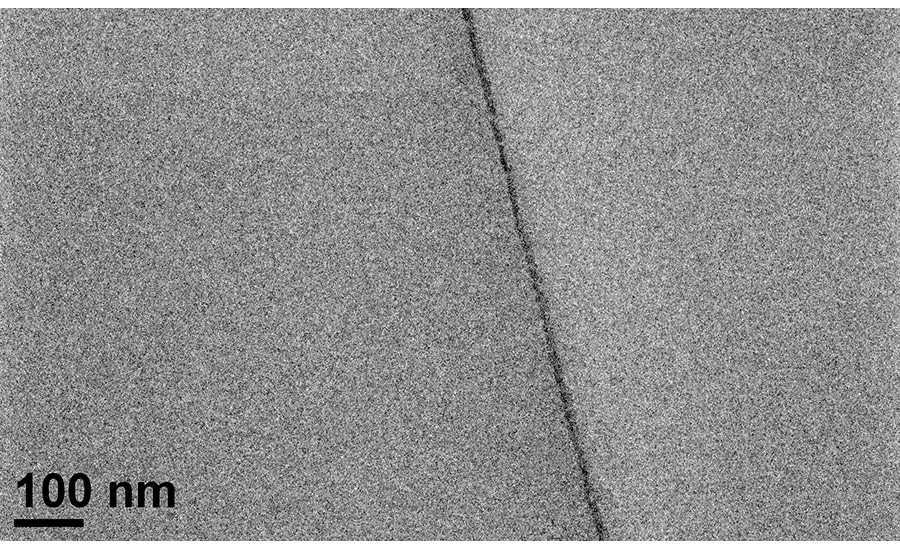 Figure 7. Transmission electron microscopy (TEM) image of a cross-section of plasma coating deposited on a 36 µm PET film. The coating (darker line at the center of the image) has a thickness of approximately 10 nm.

Figure 3 shows that treatments where the surface energy stays stable over time are possible when high dosages are used. Using such high dosage is not possible with corona treatment, as it leads to unacceptable surface degradation.

An ECTFE film was treated with two dopants to improve bonding with a two-component polyurethane adhesive. The samples were treated using the same plasma dosage. Two treated samples were laminated using a two-component polyurethane glue. The peel force was measured at an angle of 180° and a pulling speed of 300 mm/min. The surface energy was measured using calibrated inks. 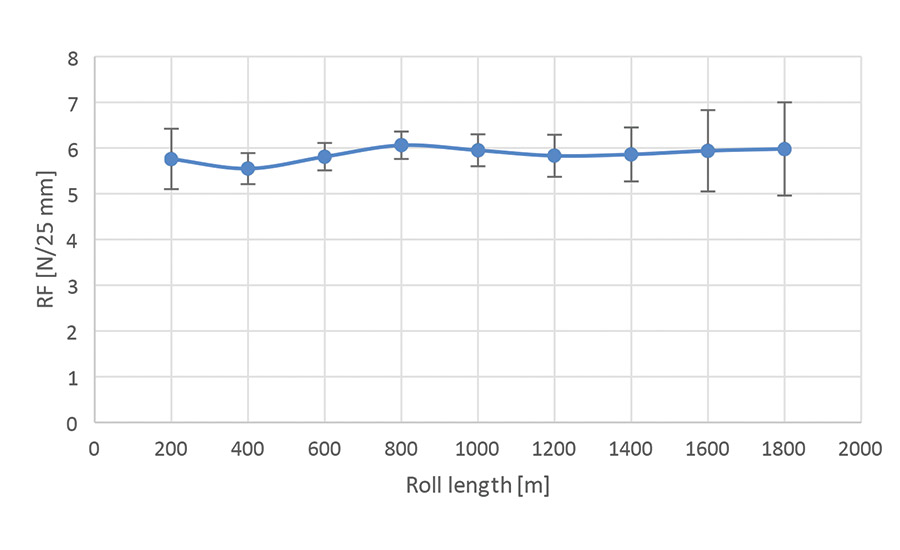 Figure 8. Stability of the process during industrial production of release liner by plasma coating. Each point represents the average of three measurements made on the full width of the film (36 µm PET film coated over a width of 2 m and length of 2,000 m).

Figure 5 shows a good correlation between the amount of nitrogen grafted onto the surface and the level of adhesion. This could be explained by the grafting of amine (-NH2) groups on the surface when using dopant 2. Amines are known to react with epoxy groups, with the covalent bonds created between the grafted amines on the ECTFE surface and the epoxy functions of the glue improving the adhesion. Figure 6 presents multiple examples of atmospheric plasma treatment for adhesion improvement with a pressure-sensitive adhesive (PSA).

Even if a large number of AP-PECVD coating options are presented in scientific literature,5 only a handful can be run at industrial scale. Plasma-deposited release coatings are characterized by a dense and extremely thin layer of a silicone-like material on various filmic substrates (e.g., PET, BOPP, PE, PI), which can be used as a process liner for film casting or as a release liner for composites moldings and pressure-sensitive adhesives (PSAs) in applications requiring ultra-low levels of contamination (see Figure 7).

The low thickness of the coating allows this release liner to have extremely low values of extractable silicones, usually only met by non-silicone release liners, while keeping the advantage of the silicone coating: low release force, solvent and temperature resistance, and a strong subsequent adhesion. The adaptation of the process conditions allows the release force to be easily increased, but it has to be noted that at this time it’s not possible to produce very easy release. A good control of all the parameters helps avoid powder formation, as evidenced by the low extractable values and high subsequent adhesion shown in Table 1, as well as a stable product as shown in Figure 8.

Plasma should not be seen as a replacement for corona; it is more of an alternative for primers. The results indicate that surface energy measurements alone cannot be used to predict the performances of the treatment. When evaluating plasma treatment in terms of adhesion and printability, tests should ideally be performed in parallel. The results also show that the plasma chemistry must be adapted to the targeted application.

AP-PECVD can be used for industrial production, as long as all parameters are controlled. But it should be noted that, at this time, the available chemistries are limited compared to what is presented in the scientific literature. Continuous developments in the technology, partially pushed by more stringent environmental legislations, will enrich the available treatments. In the near future, most wet surface primers could be replaced by atmospheric plasma treatments.

*All results shown have been obtained on a Bluemach plasma reactor devolved by CPI.

For more information, contact the author at (33) 782-511924 or nicolas.vandencasteele@cpi-plasma.com, or visit www.cpi-plasma.com. Nicolas Vandencasteele, Ph.D., is Operations and Business Development Manager for Coating Plasma Innovation. For more information, contact the author at (33) 782-511924 or nicolas.vandencasteele@cpi-plasma.com, or visit www.cpi-plasma.com.

Developments in Plasma and Flame Surface Treaters for Improving Adhesion