Blown ion plasma and flame plasma are effective and repeatable treatment methods that take the guesswork out of electronics manufacturing bonding processes.

We rely on electronics for almost every aspect of our daily lives. With the advent of compact components and circuitry, it is difficult to think of many products that do not incorporate electronics in some fashion. What you might not think about is how fragile these electronics can be and how they can become easily damaged or degraded by environmental conditions.

It is imperative that manufacturers protect these electronics. Moisture, corrosion, contamination, static, and mechanical shock can damage or destroy electronic circuits. To prevent damage, electronics such as printed circuit boards (PCBs) are typically protected with coatings. Additional protection methods include potting for critical electrical components and placing electronic components in housings that provide waterproof seals.

A coating provides a protective layer to the outside of a PCB; popular coatings include epoxy, silicone, and polyurethane. Potting applications generally involve an electrical component in a plastic or metal housing. The housing is filled with an epoxy resin that hardens and encapsulates the electronics. Other housings are sealed with adhesives that provide a waterproof seal between similar or different materials.

Almost every industry uses one or both methods in some form to protect their electronic components. Aerospace and automotive manufacturers have been the early adapters of these technologies, but thousands of applications are found in marine, electrical equipment, instrumentation, data communications, and consumer products. Wherever electronics are used, particularly in uncontrolled environments, coating and potting are important to the durability of the product.

Why is Surface Energy Important?

Many manufacturers face a problem: the individual components in both electronics and printed circuit boards are made from inherently inert, low-surface-energy materials. Why does low surface energy present a problem? Low surface energy makes adhesive bonding to the product more difficult because many adhesive chemistries will not wet out on a low-energy surface, and the bonding sites available to the adhesives are insufficient. Generally speaking, the higher the surface energy of a product, the easier it is to bond, coat, paint, or print on that material.

A classic example of surface energy in everyday life is a car with a freshly waxed surface. When you wax your car, you are in effect lowering the surface energy on the body of the vehicle. Technically, you are applying a coating with a lower energy, but the example is still sound. The wax allows the cohesive forces in water molecules to pull together; the water beads up and easily rolls off the car. As the wax wears off, the car’s surface—with its higher surface energy—is exposed. Water droplets then spread out and stick to the surface. Therefore, coating and potting applications need to increase surface energy to optimal levels, not decrease it.

When performing any bonding or coating application, each surface has an optimal surface energy threshold that is required to achieve the best possible bond. Surface energy is measured in a number of ways, including the common methods of dyne level and contact angle. Meeting the target threshold for surface energy does not guarantee adhesion. However, in general, higher dyne levels are better for enabling adhesion. Table 1 illustrates the starting surface energy of various materials, as well as the associated increasing dyne levels following surface treatment.

How is Surface Energy Increased?

Traditionally, manufacturers have used wet chemistries like solvents and primers to clean and activate surfaces. While this activation does increase surface energy and the ability for coatings or potting materials to stick, it also involves several manufacturing concerns. If the solvent or primer is manually applied, tremendous process inconsistency can result; this often leads to high variability in product quality and increased failures in the field. Manual processes are also slower and may cause production bottlenecks.

Another consideration when using wet chemistries includes environmental and safety concerns related to the handling and disposing of solvents. In addition, many manufacturers prefer a cleaner process without the expense of inventorying consumable chemistries.

Today, many manufacturers are moving away from wet chemistries and opting for in-line atmospheric blown ion plasma or flame plasma to increase surface energy and prepare surfaces for bonding. These technologies clean, micro-etch, and functionalize surfaces in a consistent and repeatable process, leading to higher product quality and decreased failures. 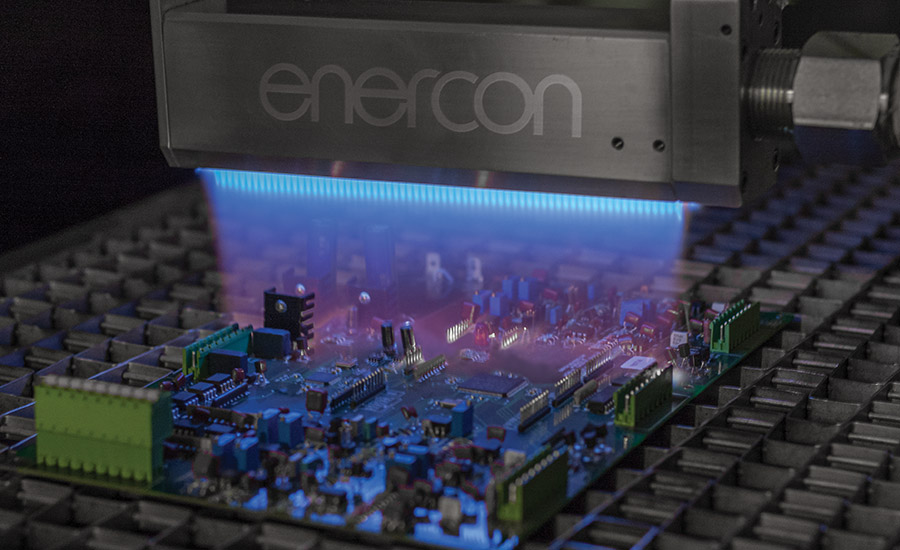 Flame surface treaters are often the better choice for larger applications or electronics with multi-dimensional surfaces.

What is Blown Ion Plasma?

Plasma is simply ionized gas. It is the fourth state of matter, along with solids, liquids, and gases. Blown ion plasma is created by passing a process gas past a high-voltage arc, which turns the gas into its ionized form. Most applications use compressed air, and the plasma produces oxygen, hydrogen, and nitrogen ions, as well as other hydroxyl groups. Under pressure (70-90 lbs/in.2), the air passes through a vortex and past the high-voltage arc, bombarding the surface with high-velocity ions. This process cleans, etches, and functionalizes the various surfaces that make up an electrical component or PCB.

Plasma’s ability to clean surfaces occurs in multiple ways. First, it removes anything that is initially held to the surface by static charge. Plasma further cleans the surface by removing organic and some inorganic materials off the surface. These materials are leftovers from the manufacturing process and interfere with bonding a coating, adhesive, or potting formulation to the electronics or the compartment containing the electronics.

Functionalizing (sometimes called activation) of the surface is the third benefit of plasma or flame treating. Here, the ions in the plasma field actually change the outermost molecular layers of the surface, adding the hydroxyl groups mentioned previously.

After passing through the plasma field, the treated surface is transformed with increased surface energy. This enables consistent and superior bonding with coatings, adhesives, and potting formulations. The plasma does this with no damaging effects to the treated electronics. The typical single plasma nozzle treats a path from ½-2 in. wide, depending on the system, and at speeds of 100 ft/min or greater.

What is Flame Plasma?

Flame surface treaters perform the same function as blown ion plasma systems. The main difference is that carboxyl groups are added to the surface instead of hydroxyl groups to increase surface energy. The result, however, is the same: increased surface energy, decreased variability, and better overall surface for coating and potting.

The range of flame burners typically begins at 2 in. wide. Any burner over 16 in. wide requires a water-cooling system, but dual head systems are available if treating up to 32 in. Beyond that, multiple systems or water-cooled systems are an option.

Which Technology is Best?

Each technology has its advantages; choosing between them involves finding the correct process for a specific application. For larger applications or electronics with multi-dimensional surfaces, flame is often the better choice. Larger burners only fractionally increase the price of the overall system, and the distance between the burner and the treat area is not as critical as it is with plasma.

For small areas or applications requiring precise treatment paths, plasma is often the best choice. Plasma has the advantage of much lower incremental costs. Without a fuel component requirement like flame plasma, air plasma systems only cost pennies per hour to operate. When using plasma, it is important to note that the treatment speed and distance to the surface are critical to getting uniform treatment. For this reason, robots, conveyors, or other material handling systems are generally used.

Whether coating a PCB, filling an electronic housing with epoxy, bonding surfaces together, or simply printing on a material, preparing the surface for bonding has a huge effect on the overall quality and durability of the product. Having a clean, highly active, high-surface-energy material promotes manufacturing quality and efficiency while adding product durability and integrity. Blown ion plasma and flame plasma are both highly effective and repeatable treatment methods that take the guesswork out of bonding processes in electronics manufacturing.

For more information, contact the author at (262) 250-3181 or wlee@enerconmail.com, or visit www.enerconind.com.

Wilson Lee is the Director of Business Development for Enercon Industries. For more information, contact the author at (262) 250-3181 or wlee@enerconmail.com, or visit www.enerconind.com.