An Ounce of Prevention Leads to Efficient Adhesive Assembly Operations

Environmentally friendly cleaning and preventative maintenance can pay dividends in terms of efficient operation and a safer manufacturing environment.

Have you ever run your hot-melt tank above the adhesive manufacturer’s recommended operating temperature? Did someone on the line ever forget to turn the equipment off at the end of the day? What about drips on the tank lid, or that one spot on the nozzle that always seems to collect buildup? It’s quite possible that you’ve run into all of these issues (and others), as well as the char that resulted.

“Char is literally just burnt glue,” says Frank Cavallo, president and CEO of GlueGuard Inc. “When you put hot melt in a tank and you melt it, it generally looks clear. Maybe a slightly cloudy look, but relatively clear. Glue is like any other material. If you leave it on heat for long enough without it moving or circulating, it’s going to burn. Char is literally just black chunks of burnt glue.”

Char in the tank is bad enough, to be sure, but it doesn’t stay in the tank. Smaller pieces flow along with the hot melt through the system’s hoses, guns, and nozzles, causing multiple problems. Issues of concern include clogged equipment and misfires that ultimately result in rejected product, which, in turn, necessitates shutting down the line to either clean or replace the affected parts. It’s a double-whammy of lost production and increased costs for replacement parts and man-hours.

These issues are compounded if you’re using a polyurethane (PUR). “Polyurethanes have a whole other set of issues to contend with, because when a PUR sets, it is set. That is it. You’re done,” Cavallo explains. “There have been instances where PUR will set in a hose or a tank, or on something where maybe it shouldn’t have been. A lot of times, that piece of equipment would be garbage, and they’re not inexpensive pieces of equipment. We’ve even heard of companies using blowtorches to try to clean PUR off of their equipment.”

While not as immediately dangerous as blowtorches, potentially harmful solvents and citrus-based products have traditionally been used for cleaning in manufacturing environments. In addition, paraffin waxes are often used when trying to clean non-PUR hot-melt tanks, but they struggle with char and don’t provide a deep clean. As Cavallo explains, plants are looking for alternatives.

“The thinking has just been, ‘Hey, something’s dirty. How fast can I get it off?’ So you use something like harsh solvents or citrus that just dissolve and eat away anything, including the paint off the machines eventually,” he says. “Well, that comes with consequences.”

Environmentally friendly options exist that are formulated to address specific needs (e.g., general hot melt, liquid adhesive, or PUR).* The non-solvent, non-citrus products are free of volatile organic compounds (VOCs) and are safe to use in food-related applications; the majority of the products are certified by NSF International in the U.S., as well as the Canadian Food Inspection Agency (CFIA).

These products work by reversing the effect of the adhesive, essentially changing the dried adhesive back to a liquid state for easier removal. To clean a general hot-melt tank, the user would drain the tank (leaving the temperature set at the hot melt’s normal operating temperature), fill the tank approximately half full with the cleaning product, and then let it heat up.

If the tank is quite dirty or hasn’t been cleaned in a long time, the process may require more product. Similarly, the amount of time needed for cleaning depends on the thickness of the char; it could take as few as 15 min or up to several hours for a really dirty tank. (Cleaning PUR generally entails a longer timeframe than a general hot melt.)

The majority of the char will fall off as the adhesive is reversed. Once that happens, the user should let the tank cool and drain it, and then use a soft bristle brush on any remaining char.

Hoses can also be cleaned in a similar way, though Cavallo offers words of caution here. “You can’t see what’s inside a hose, so you never know for sure if it’s completely clean,” he explains. “If you’ve only partially cleaned it and then go back to full production, you can have some of that leftover char go through, clogging guns and nozzles.”

Though not a guaranteed solution, one option is to disconnect the nozzle from the hose and point the hose back into the tank through a strainer. The strainer will catch the char as the cleaner runs though, making it easier for the user to see when the process is complete.

The non-corrosive cleaning products can also be used to safely clean nozzles. Instead of trying to gouge the char out or simply replacing the nozzle, users can place the nozzle and cleaner in a pot on a hot plate and let the nozzle soak until the char is removed. 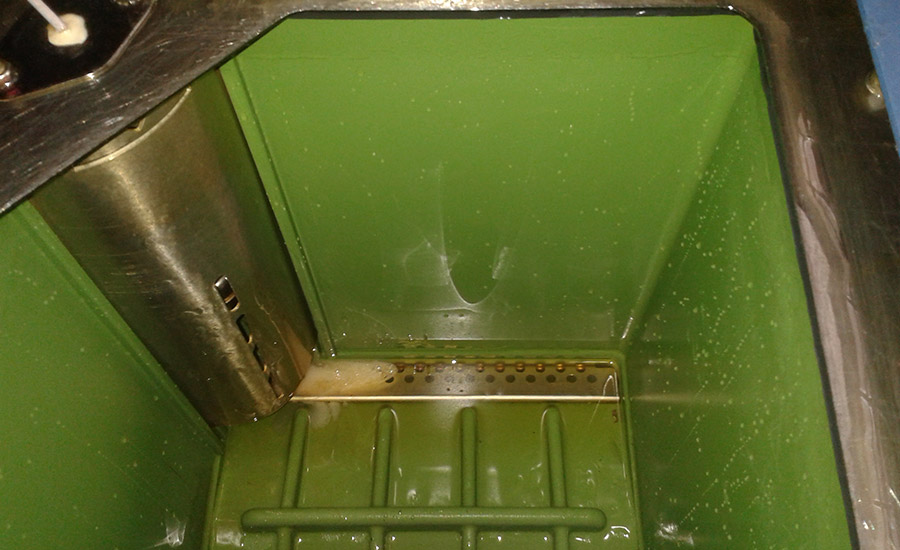 Char falls off as the adhesive reverses. A soft bristle brush can be used for any remaining char after the tank cools and drains.

Buildup and char are inevitable to a certain degree in assembly operations that use hot-melt and liquid adhesives. While simple cleaning options are necessary in any manufacturing environment, it can be much more efficient for the overall process to prevent excessive buildup in the first place.

As Cavallo explains, buildup has a tendency to occur in specific areas. “Sometimes it’s from glue splashing or parts rubbing against the machine where they’re not supposed to,” he says. “Whatever the reason, if you’re getting glue buildup, chances are it’s continually building up in that same place. So let’s focus on that spot.”

A simple and safe option is to coat the affected area with a solvent-, citrus-, and VOC-free preventative product.* Let’s take nozzles as an example; overspray is a prevalent issue, and the resulting char can cause problems during adhesive application. After applying a thin coating of the preventative product to the impacted nozzle, users can run the system for each shift as they normally would. No action is needed at the end of the shift, other than turning off the equipment and letting it cool. The next morning, the user can simply peel the cooled buildup off of the nozzle and discard it.

“Your daily process changes slightly, but every day you’re starting with a fresh, clean machine, so your odds of going down for some kind of glue-related issue become astronomically less,” Cavallo says.

As long as the coating isn’t wiped off prematurely, these preventative products typically last for several months, helping to ensure cost-effective and efficient production speeds. Spot touch-ups can be done as needed, though adding a full wipe and reapplication to the monthly preventative maintenance schedule is recommended.

The positive employee impacts that can be achieved through the use of simpler and safer cleaning options could arguably be more important than the production-related benefits. Traditional solvent-based products are often dangerous to worker health, causing respiratory issues and even cancer. In addition, they can be flammable and must be stored in special lockers. Eliminating the need for solvents in the workplace helps ensure worker safety.

Worker injuries are reduced when all systems are able to run in good working order. When a piece of equipment fails, workers need to take the equipment apart and rebuild it, which introduces the possibility for accidents in the workplace.

“You don’t have to spend time—or the extra elbow grease—trying to clean equipment, and there’s less chance of random injuries from just trying to clean something that’s almost impossible to clean,” Cavallo says. “So it’s the safety of the actual product itself, plus making jobs easier, with less physical labor to do the same work.”

Speaking of accidental injuries, some employees might also go to extreme lengths to clean the char and get their line back up. Let’s avoid the blowtorches, shall we?

Susan Sutton is the former Editor-in-Chief of Adhesives & Sealants Industry.