Weathering tests for adhesives help ensure that the adhesive is able to perform as expected under specific environmental conditions.

Degradation due to solar radiation (or sunlight), heat, and humidity are often a concern when organic and polymeric materials such as adhesives are intended for outdoor use. The photochemical effect of sunlight on a polymeric or organic material depends on the absorption properties and the spectral sensitivity of the material. The wavelengths that typically have the most critical effect range from 295-400 nm (ultraviolet radiation, UV). Solar radiation can cause the formation of radicals that can lead to matrix and additive degradation.

High temperatures can cause thermal degradation while also accelerating other degradation and diffusion processes. Temperature cycles can also lead to mechanical stress by expansion and contraction, which might impact the adhesive strength.

Finally, moisture in the form of relative humidity or as liquid water (rain or dew) has an influence on material performance. Moisture can cause hydrolysis reactions in some instances, but moisture cycles can also result in mechanical stress to a material that might also impact the adhesive strength.

These stresses together can lead to cracking and delamination effects, even though the adhesive is not directly exposed to the environment. Table 1 gives an overview of the most important weather parameters for two reference locations.


Effects of Weather Factors on Adhesives

Adhesives are used in a wide range of applications, such as transportation (automotive, rail) and architectural, among many others. Though the adhesives themselves are not directly exposed to the environment in most of these applications, one or more weathering factors can still affect the adhesive performance.

Adhesive materials often do not see direct sunlight in their end use. If adhesives are used to fix transparent materials, however, photochemical ageing might take place from the radiation passing through the substrate (glass or plastic). Temperature is also a concern, as most materials heat up when exposed to solar radiation. Moisture diffusion is a potential concern for polymeric substrates as well, and this might affect the adhesive. These factors together may cause ageing of the adhesive itself or the combination of the adhesive and the substrate.

Ageing of adhesives typically reduces the adhesive bonding strength and can lead to fracture or delamination, especially in combination with mechanical effects. If adhesives are used with transparent substrates, hazing and discoloration might appear.

Another factor that should not be neglected if adhesives are used with polymeric substrates is the diffusion of additives and stabilizers from the adhesive into the polymer or vice versa. In this case, unexpected ageing effects may occur. It is important to test the compatibility and the long-term performance of the combined materials.

The simplest and most realistic approach to test the stability of materials to weather is to expose them outdoors in real weather conditions. This is commonly done at locations such as southern Florida or Arizona, which offer extreme climatic conditions and are also used as reference (or benchmark) locations.

Exposures can be as simple as putting the test specimen(s) on a rack. However, considerations have to be made concerning the specific details of the exposure. Which exposure angle should be used for the test? Should the specimen(s) be exposed with or without an insulating backing? Answering these questions is not always easy. In the end, the more similar the exposure is to the end-use environment, the more likely it is to achieve realistic results.

Even though outdoor exposures can be considered the most realistic way to perform weathering tests, they do bring some downsides. Natural testing relies on actual weather conditions, is time consuming, the potential for acceleration is limited, and results often are hard to reproduce. Therefore, accelerated testing using artificial light sources is necessary for effective and reproducible product development.

The core of each weathering test instrument is the light, or radiation source, known as the “lamp.” Different radiation sources have been used throughout 100 years of accelerated weathering testing. Options range from historic carbon-arc lamps to modern xenon-arc technology and fluorescent-UV technology, which today are the main types of light sources used in artificial testing of materials such as adhesives, coatings, plastics, textiles, and paper, among many other applications.

Xenon-arc lamps provide a spectral irradiance that is similar to the full-spectrum range of natural sunlight, including the UV, visible, and infrared wavelengths. With appropriate optical filters, window-glass filtered solar radiation can be simulated for interior material testing (see Figure 1), as well as for outdoor and warehouse and/or retail setting testing. 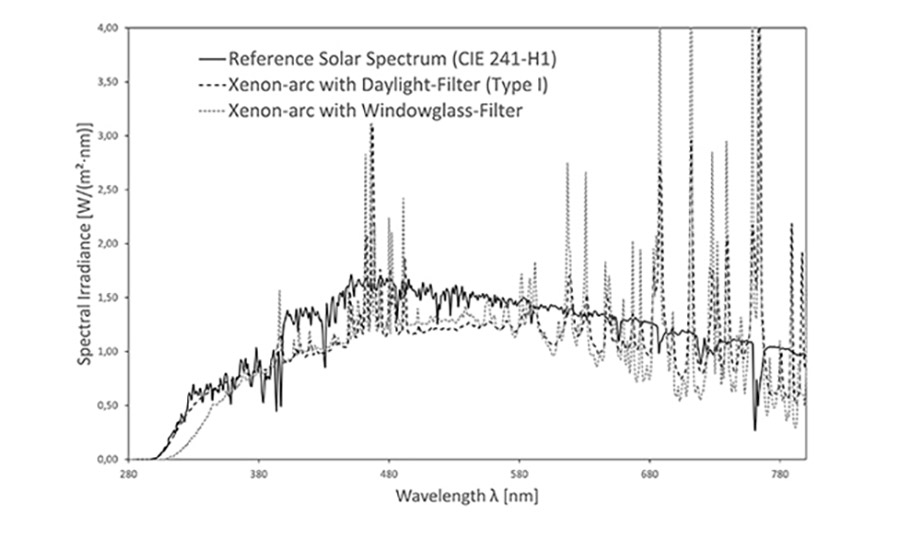 Figure 1. Spectral irradiance of xenon-arc radiation with “daylight” and “window-glass” filters compared to the reference solar spectrum, according to CIE 241.


Xenon-arc lamps produce heat and need effective cooling by either air or water. As illustrated in Figure 2, test specimens are typically mounted on a test rack that rotates around the lamp (or lamps) to increase uniformity (also referred to as rotating rack instruments). The counterpart to rotating rack instruments are flatbed instruments, which have the light source located in the ceiling of the chamber directly above the sample tray. Both designs typically provide features to control the climatic conditions, such as chamber air temperature, relative humidity, and surface temperatures (BST or BPT). They may also be able to provide water spray to simulate the effects of rain and dew. 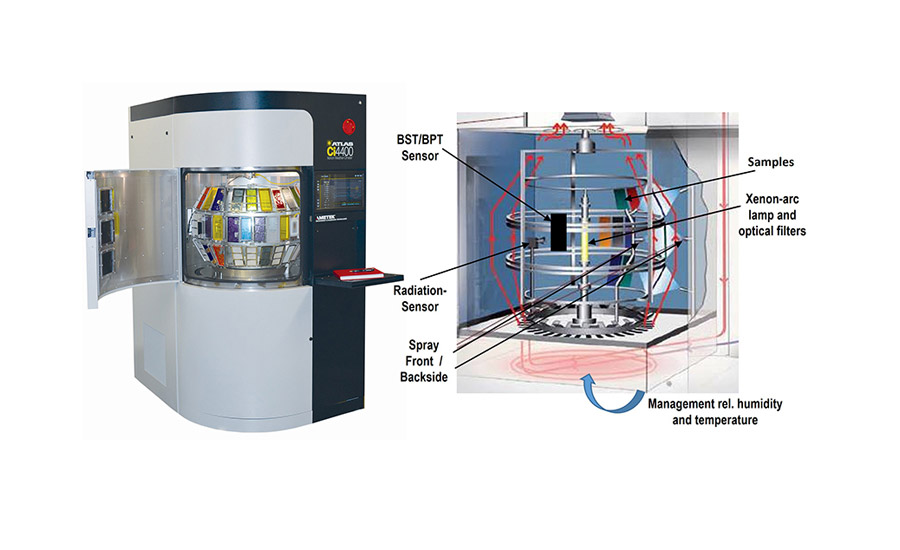 
Fluorescent-UV lamps only provide the most critical part of the solar spectrum: the UV. Different lamp types are available, but the most commonly used and most realistic is the UVA-340 lamp with a peak irradiance at 340 nm (see Figure 3). 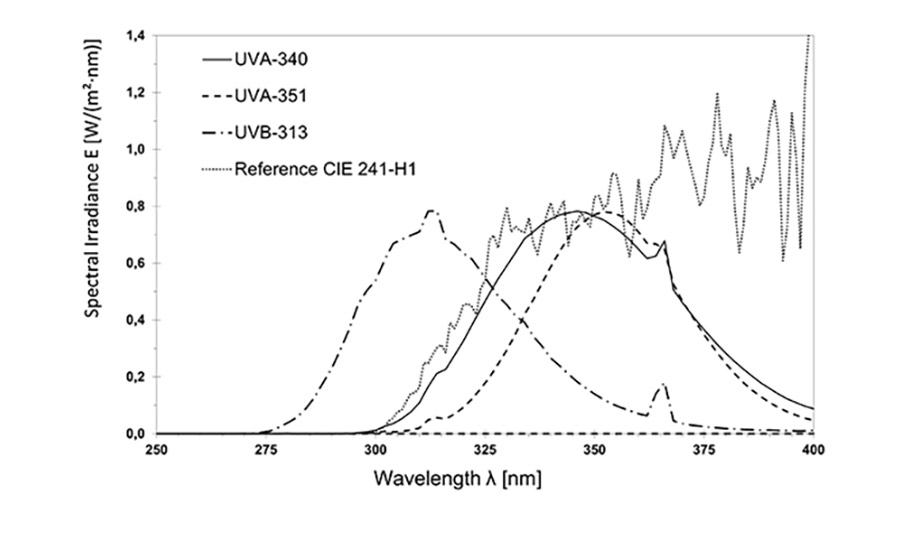 Figure 3. Spectral irradiance of fluorescent UVA-340, UVA-351, and UVB-313 lamps and the reference solar spectrum, according to CIE 241.


Due to the absence of longer wavelength radiation, effects that require visible light, such as dyestuff degradation, are not realistically simulated. The absence of visible and IR radiation results in no solar loading (thermal) effects, and the specimen color does not influence the surface temperature (see Figure 4). 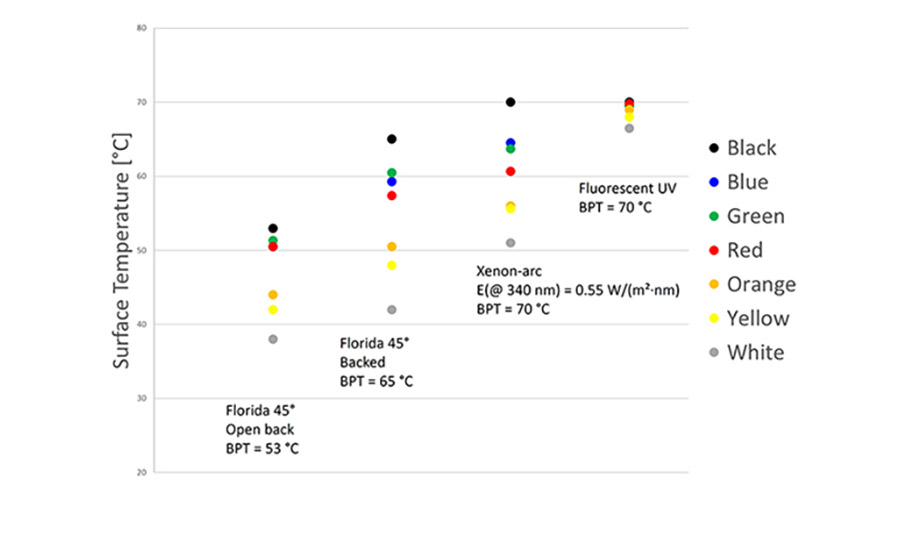 Figure 4. Surface temperatures of differently colored metal panels in Florida (at 45° facing southward, backed and unbacked) and in a xenon-arc and a fluorescent-UV instrument.


As shown in Figure 5, fluorescent-UV devices typically use an array of lamps. Moisture can be provided by condensation or by spray. Specimen temperatures are controlled by the chamber air and measured with a BPT sensor. 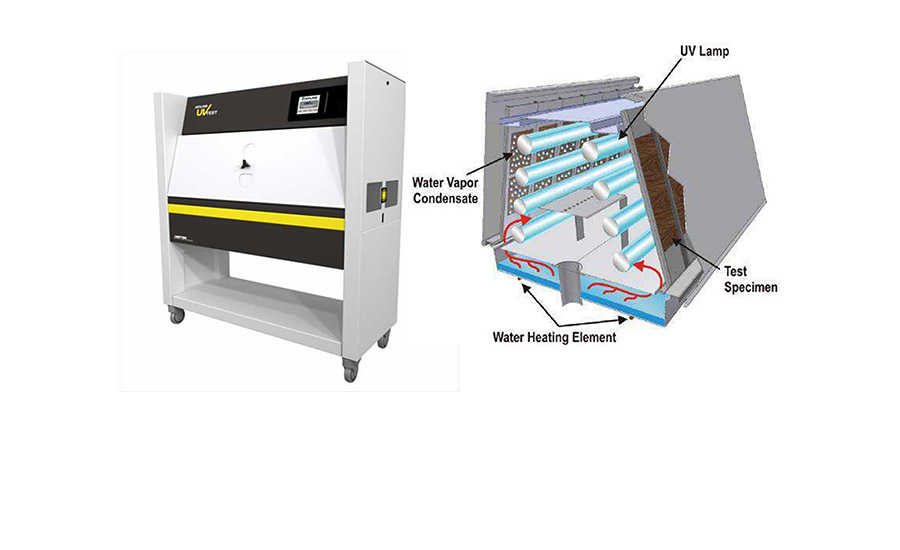 Two general international test standards for adhesives include or are related to weathering. One is the ISO 9142 (2004) “Adhesives-Guide to the selection of standard laboratory ageing conditions for testing bonded joints.” This standard refers to the ISO 4892 series of standards related to weathering testing of plastics, including xenon-arc, fluorescent-UV, and the outdated carbon-arc technology. In addition, ASTM D904-99 (2021), “Standard Practice for Exposure of Adhesive Specimens to Artificial Light,” refers to ASTM G154 for fluorescent-UV testing and to ASTM G155 for xenon-arc testing.

ISO 9142 and ASTM D904 do not define all test parameters that are required for reproducible testing. (This might be addressed in future revisions.) Tables 2 and 3 show the parameters of the most common xenon-arc test cycles, while Tables 4 and 5 show the most common fluorescent-UV test cycles for outdoor and indoor applications as also used in other industries. Test methods for adhesives for automotive or rail applications most often refer to one of those methods.

Material degradation and service life prediction can be complex and depend on the material, the environment, and the lifetime expectation. That is why most test methods do not define test durations. However, some do include minimum requirements, such as ASTM D904, which requires 168 hrs of testing or multiples thereof (or unless a significant change is achieved in a shorter time).

Test specimens for weathering testing should be prepared as similarly as possible to the final product. Exterior applications should be tested according to the corresponding weathering method with water spray, if relevant in the end use environment of the test specimen.

It is always recommended to support artificial testing with outdoor exposures at a reference location according to ASTM G7 or the ISO 877 series. Even though not necessarily accelerated, these natural tests give a much more realistic and deeper insight in the end-use performance of any material and provide the basis for service life prediction studies.

For more information, contact the author at florian.feil@ametek.com or visit www.atlas-mts.com.