Opportunities and Challenges of Biomimicry in Adhesives R&D

Though bioinspired approaches to adhesive R&D often lead to great improvements in the lab, translating these sophisticated chemistries to commercial scale is a considerable challenge.

Highly sophisticated and engineered designs found in nature continue to astound scientists and engineers. Biomimicry is the science of copying a design discovered in nature and applying it to the world of chemistry, material science, and engineering in order to offer improved products with optimized functionality.

With the host of diverse biomaterials produced by an estimated 6.5 million species on land and 2.2 million species in the oceans, the biomimicry toolkit that man has to play with is, for all practical purposes, limitless. The superior designs discovered in nature have inspired many research programs from around the world, both at the university and commercial levels. Reverse-engineering research efforts have led to improved product performance and functionality. The gecko, sandcastle worm, caddisfly, mussel, and sea cucumber are all species that have inspired new chemical approaches to creating adhesives with unique performance features.

For example, the unique combination of proteins and amino acids found in Phragmatopoma californica (sandcastle worm) stimulated research into biomimetics to create biocompatible and water-compatible adhesives for medical applications. This and other examples of bioinspired adhesive chemistries have improved the range of approaches for developing bio-adhesives used for repairing tissues, skin, and bones. Such applications require adhesives that can be applied and cured while submerged in an aqueous environment, which is a capability inherent to a variety of underwater species.

Even though such bioinspired approaches lead to great improvements in the lab, translating these sophisticated chemistries to commercial scale can be a considerable barrier to these technologies ultimately reaching the masses. Biology is extremely complex, and the functional characteristics of a given biomaterial found in nature is a synergistic combination of multilayered biopolymers and other complexing chemistries. The rich tapestry of biological materials found in a given species to perform a certain task is more sophisticated than the reductionist approach afforded by commercial-scale chemical synthesis operations.

To create solutions that are scalable and cost effective by normal production methods, scientists and engineers must copy only a portion of the complete solution expressed in nature. Reducing the solution by removing the layers of other critical components normally results in reduced performance. What components can be added back to the solution to improve performance without dramatically increasing the complexity of scale-up and the associated costs?

Many biological components, such as proteins, enzymes, polysaccharides, lipids, and other sophisticated biopolymers and molecules, are inherently unstable and readily oxidized or hydrolyzed. When found in their natural environment, this isn’t an issue—mainly due to a complex network of antioxidants, protective molecules, and the cells’ ability to resynthesize each component on demand. However, when a single component is isolated from its cellular ecosystem, its inherent instability is quickly realized as it is exposed to the harsh elements of the world. Since commercial products require robust durability, some reengineering of the solution found in nature may be necessary, depending on the molecule.

Biological systems solve problems using both chemistry and geometry. Geometry normally occurs at multiple hierarchical scales. The perfect example is the gecko foot, whose amazing adhesive characteristics are due to the morphology at both the micro and nano scale. Each square millimeter of a gecko’s foot has approximately 14,000 micron-sized setae, and each setae, in turn, divides into approximately 1,000 nano-sized spatulas. 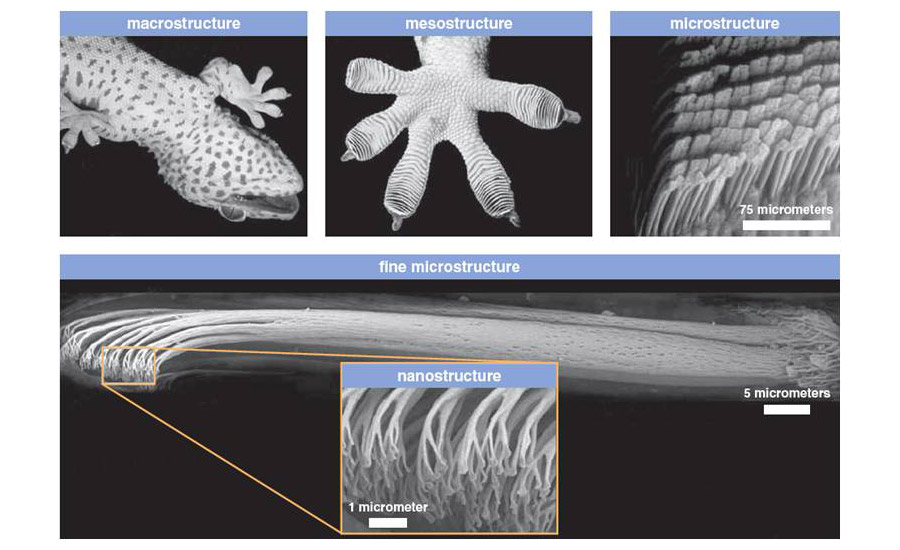 
How does one faithfully replicate multi-scale superimposed geometries for commercial-scale production? Other examples of complex geometries include nanocrystals of certain minerals that are composited into any arrangement of microfibers. Sacrifices are normally made to reach commercial scale, as only one aspect of the geometry may be considered.

Replicating a biological system may involve producing molecules that are outside the realm of normal organic synthetic routes. To produce these molecules, enzymatic catalysis or biofermentation systems may need to be employed. Although not impossible to employ at the large scale, these production methods offer their own set of scale-up challenges, including cost, reproducibility, and purity. Engineering enzymes and microorganisms is a science all unto itself, requiring large R&D efforts to successfully implement from pilot to production.

For these reasons, truly implementing a bioinspired approach is quite daunting when considering the commercial scale needed to fully capitalize on solutions found in nature. However, as the capabilities to manufacture complex molecules improve and researchers discover innovative ways to reproduce the activity found in nature in a commercially viable format, you can expect to see an increasing range of examples in the adhesives and sealants product space.

Douglas Corrigan, Ph.D., is vice president of the ChemQuest Technology Institute,
You must login or register in order to post a comment.