As the world emerges from the impacts of the COVID-19 pandemic, the global economy is seeing some positive indicators for growth, with sustained high demand. The recovery gained traction in 2021 following the introduction of vaccines and reduced protocols related to COVID-19. Strong increases in new orders for all major subsectors indicate that growth will continue in 2022, after industrial production and capacity utilization surpassed pre-pandemic levels in the middle of 2021.

However, market optimism is hampered by major challenges on an unprecedented scale: inconsistent supply, logistics and production bottlenecks, war in Ukraine, fuel prices spiking, and labor shortages. Central banks throughout the world recently announced a wide breadth of policy changes to attempt to curtail the impacts of inflation.

While manufacturers strive to keep pace with demand, these challenges have placed a damper on operational efficiency and margins, as many announce price increases to mitigate impacts of surging costs and work to improve supply chains with localized or secondary supply. Price increases and supply chain volatility are expected to continue but are difficult to predict, as evidenced by the uncertain impacts unfolding from external, uncontrollable factors such as global health, the Russia-Ukraine conflict, and severe weather events.

U.S. construction data has stabilized. The residential side of spending has led much of the growth, climbing as demand soared for housing inventory. ABC’s Construction Backlog Indicator and Confidence Index suggest that growth in U.S. construction is likely to continue, with the largest recent increase in backlog in the industrial segment, as companies look to increase domestic supply chain capacity.

Automotive production has been severely impacted by supply chain constraints and shortages impacting production, particularly semiconductors. North American light vehicle production experienced the biggest dip in the second quarter of 2020 as the pandemic spread. North America-based manufacturers worked to quickly catch up, ramping up production to meet consumer demand for vehicles as shutdowns eased. Production is expected to steadily recover through 2022.

Significant contractions in Russia and mainland China have weighed down the overall potential for global growth. With the exception of the initial COVID outbreak, Russian output has dropped the most of any region this year, as the invasion of Ukraine escalated, Western countries imposed a series of sanctions, and many companies announced restrictions for doing business in the country.

Following the beginning of the invasion at the end of February, the manufacturing Purchasing Managers’ Index (PMI) for Russia began to contract, falling to 44.1 in March, as reported by S&P Global. The PMI rebounded slightly in May to 50.8, but output levels remained in contraction, pointing to a slowing but still overall trend of decline.

China’s manufacturing and service production both fell as the country saw new pandemic lockdowns amidst its zero-COVID policy. The PMI showed contraction for three straight months, falling from 50.2 in February to a low of 47.4 in April, before rebounding slightly to 49.6 in May, as reported by the National Bureau of Statistics of China.


Factors influencing regional GDP growth in the 2022 first quarter include:

On February 24, 2022, Russia launched a full-scale invasion of the Ukrainian mainland across a broad front, forcing Ukraine to dissolve all formal diplomatic connections with Russia. The war’s consequences are becoming more apparent as energy and raw material costs continue to rise. Naturally, this has a significant impact on the world economy, with the chemical industry possibly suffering the most.


Nearly 40% of Europe’s annual gas consumption is imported from Russia via four routes: Ukraine, Belarus-Poland, and the Nord Stream 1 and TurkStream pipelines, which connect Russia to Germany and Turkey via the Baltic and Black Seas, respectively (see Figure 1). 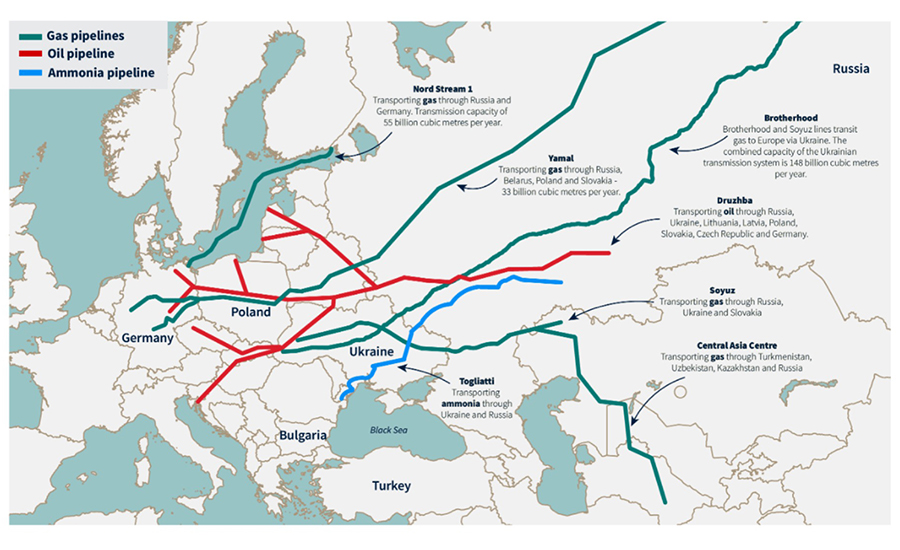 
Overall, Russian pipeline supplies were constrained in 2021. Producer Gazprom has only sent one-third of the gas that it was due to send to European consumers via Ukraine as part of a five-year transit arrangement since the beginning of this year.

Consumers will be relieved to see oil prices soften following the recent drop. However, it will be some time before this translates to cheaper gas costs. The issue of demand destruction has reappeared following the U.S. Federal Reserve’s 75-basis-point hike in interest rates in recent weeks to rein in surging inflation.

Persistently high oil prices have threatened to reduce aggregate consumption of the commodity as individuals and corporations tighten their wallets and reduce fuel purchases. Sanctions placed by the EU on Russian oil shipments have aggravated the situation, which was already stressed. Considering that the Organization of the Petroleum Exporting Countries (OPEC) has been unable to reach previous production objectives, the organization’s dwindling spare capacity puts even more upward pressure on prices.

In its oil market report for June 2022, the International Energy Agency (IEA) released predicts that following a brief dip, demand will build up in 2023 to surpass pre-pandemic levels of 101.6 million barrels per day (bpd). A return to Chinese economic development is expected to support demand recovery, balancing weaker demand from Organization for Economic Cooperation and Development (OECD) countries. 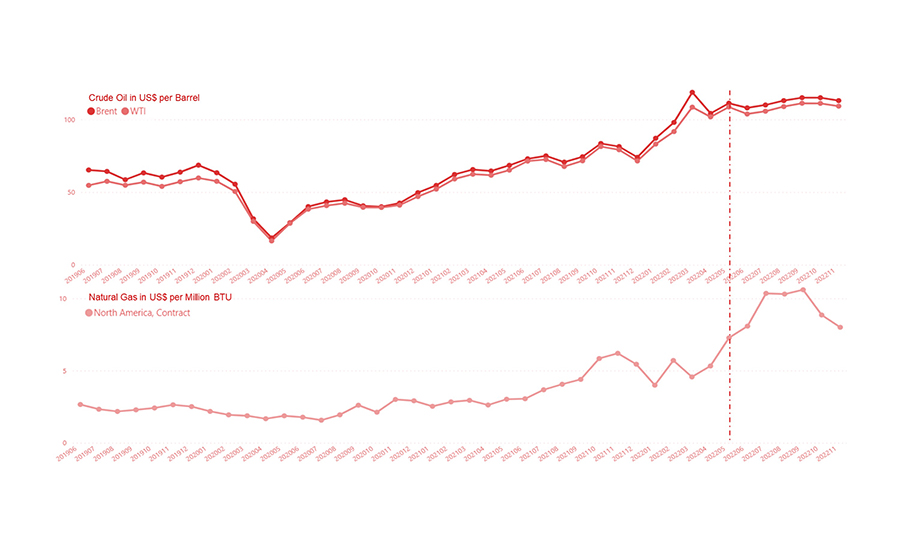 
The developing global energy shortfall, which could quickly escalate into a catastrophe by winter, threatens to drive up chemical and polymer costs, or at the very least maintain them well into 2022 and perhaps beyond. 2021 saw wave after wave of global supply disruptions, ranging from the Delta variant’s rolling COVID restrictions to the U.S. deep freeze in February and Hurricane Ida in August, as well as container shortages and logistics constraints causing extended lead times. These disruptions led to shortages in basic commodities all the way down the supply chain to semiconductors and finished goods, such as appliances. 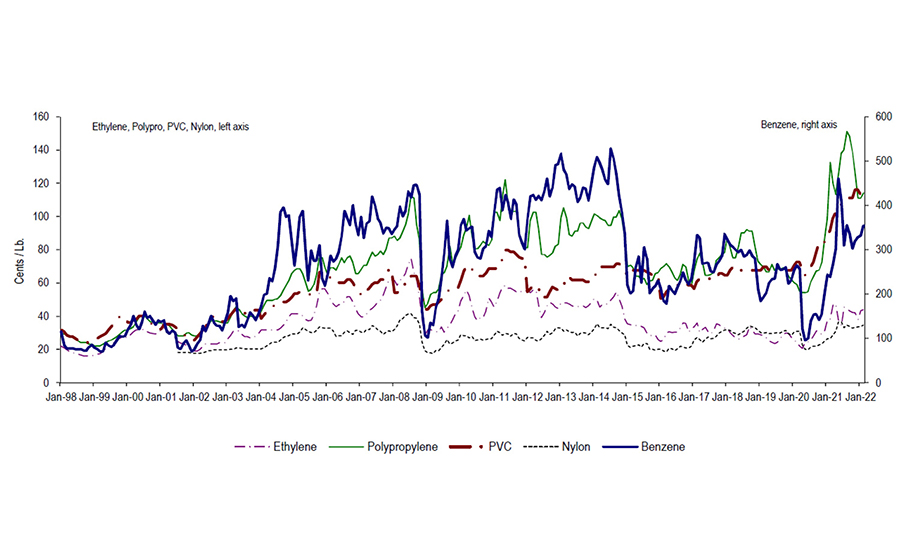 These petrochemicals are derived from refined petroleum and are used as feedstocks for a wide range of important goods and materials. For example:

Growth projections of base chemicals capacities, such as ethylene, propylene, and paraxylene, are more than 4% per year through 2022 (see Figure 4). These projections anticipate robust end-market demand, which would allow the major petrochemical companies to continue developing and ramping up capacity. 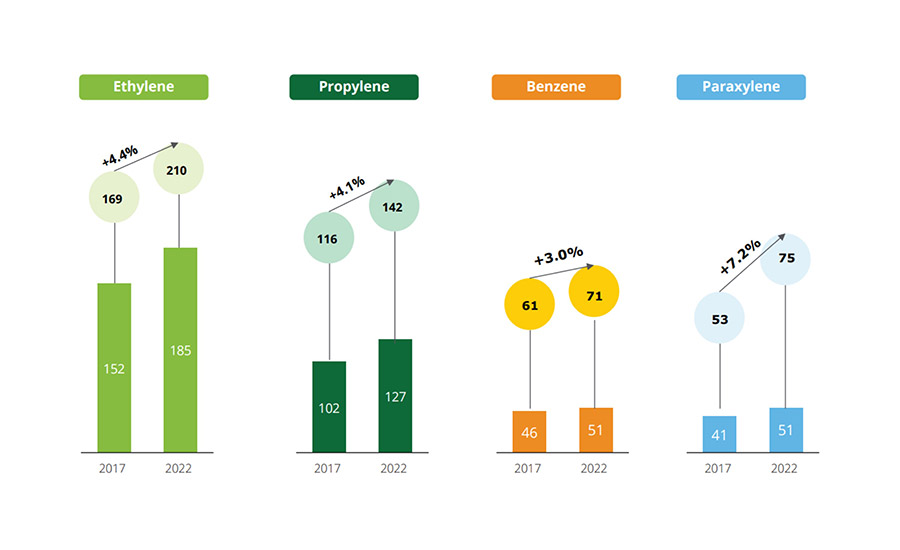 
In recent weeks, the U.S. spot market for ethylene and propylene was particularly active, with trades totaling 113 million pounds at the Texas and Louisiana hubs. Overall, ethylene prices were range-bound, with May delivery settling at 28.50-30.50 cents per pound (cpp) and June delivery at 28.50-29.75 cpp. The 45-day weighted-average price of ethylene in the U.S. Gulf Coast (USGC) in May was 29.85 cpp, up 3.30 cpp from April.

U.S. polymer-grade propylene (PGP) spot prices in the U.S. fell, with agreements for May delivery concluded in the region of 53.50-55.25 cents per pound (cpp). In recent weeks, the spot market was busy, with 38.5 million pounds traded for May delivery. The 45-day weighted-average price for USGC PGP in May was 55.78 cpp, down 10.21 cpp from the April 45-day weighted-average price. 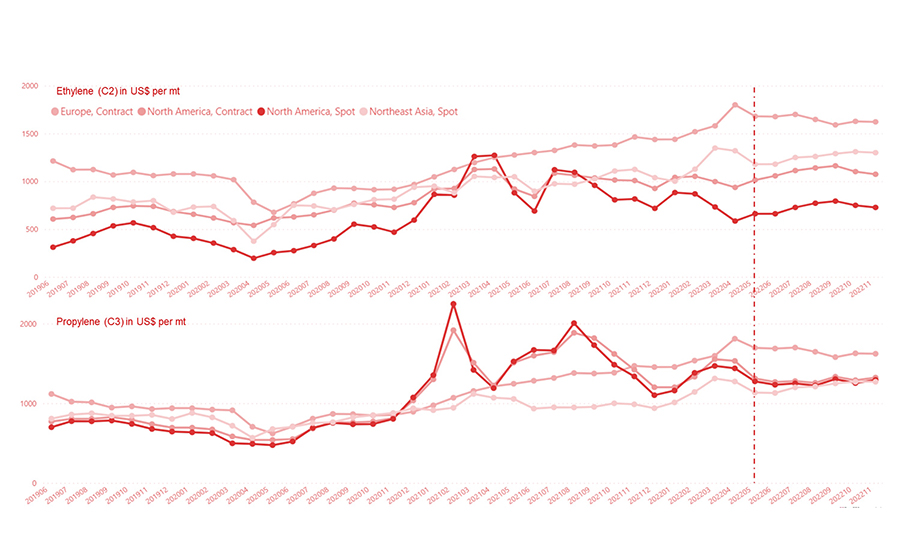 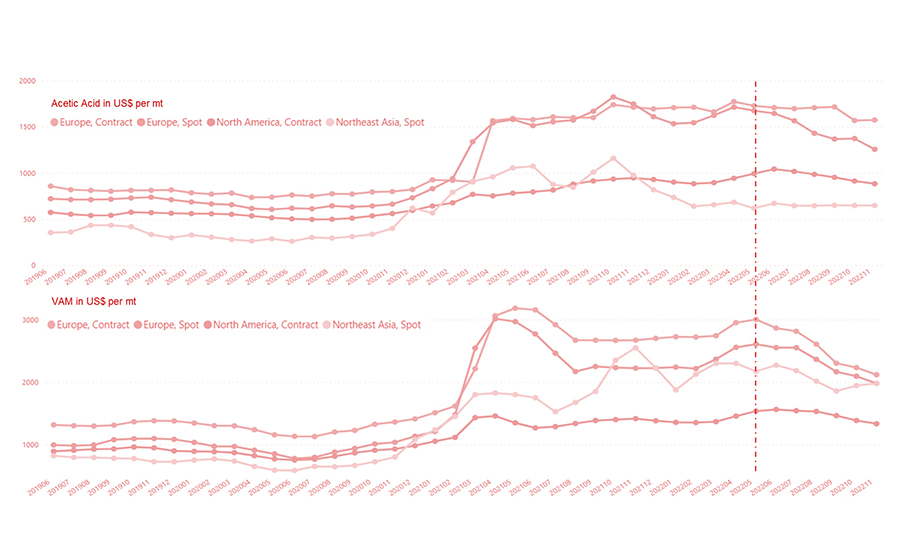 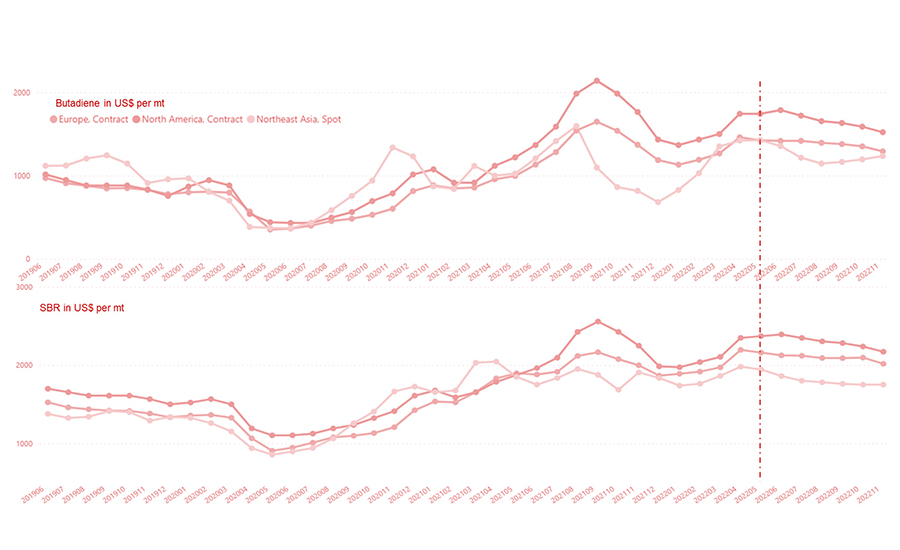 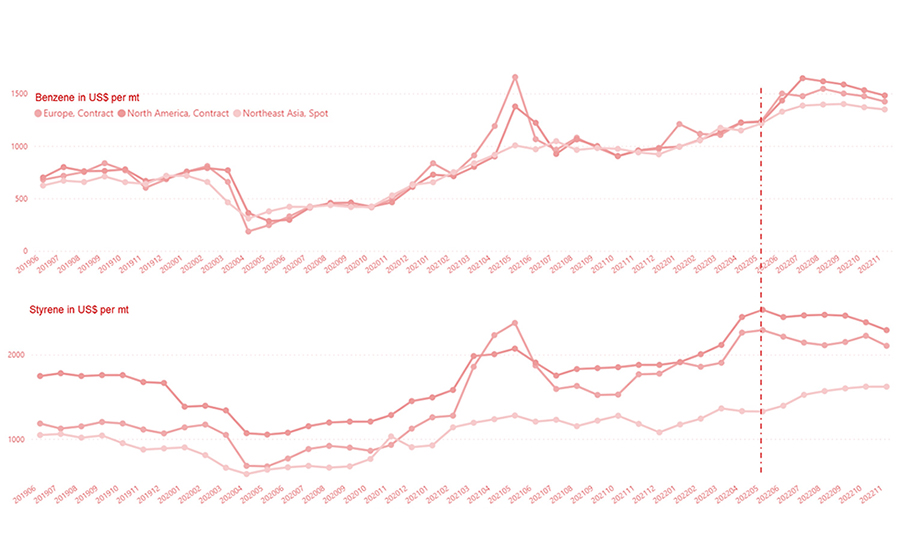 The overall global economic and market outlook is fraught with risks and uncertainties, including the ongoing Russia-Ukraine conflict, supply chain constraints, and energy prices. These factors will impact the availability and cost of raw materials and feedstocks across the supply chain. Many manufacturers seek to address these hurdles through measures such as price increases and optimizing their supply chains.

However, overall recovery coming out of the COVID-19 pandemic shows some positive indicators as production bounces back from pandemic levels and demand remains relatively strong. Rather than a full recession, the combination of slowing growth and high costs and inflation may point to a stagnating economy.

Michael Rezai is a senior consultant for The ChemQuest Group Inc.