Polymer emulsions used in pressure-sensitive adhesives (PSAs) often have relatively simple particle structures, with surfactants and ionized or polar side chains on the particle surface surrounding a hydrophobic core. These particles coalesce to form the PSA film during drying, but boundary layers of hydrophilic components remain. These boundary layers are thought to compromise the performance of waterborne PSAs relative to solvent-borne PSAs, which have more uninterrupted film structures.

In this work, an alternative particle architecture was investigated for enhanced PSA properties. A pre-strained interpenetrating network was designed into each particle through a multistage polymerization process. Based on prior work, such a network was expected to favor polymer chain scission upon mechanical deformation of the film, leading to higher stress at break and higher observed peel force. The PSA properties and polymer rheology of films made from these designed polymer particles were investigated to identify opportunities to improve the adhesion/cohesion balance of waterborne PSAs. 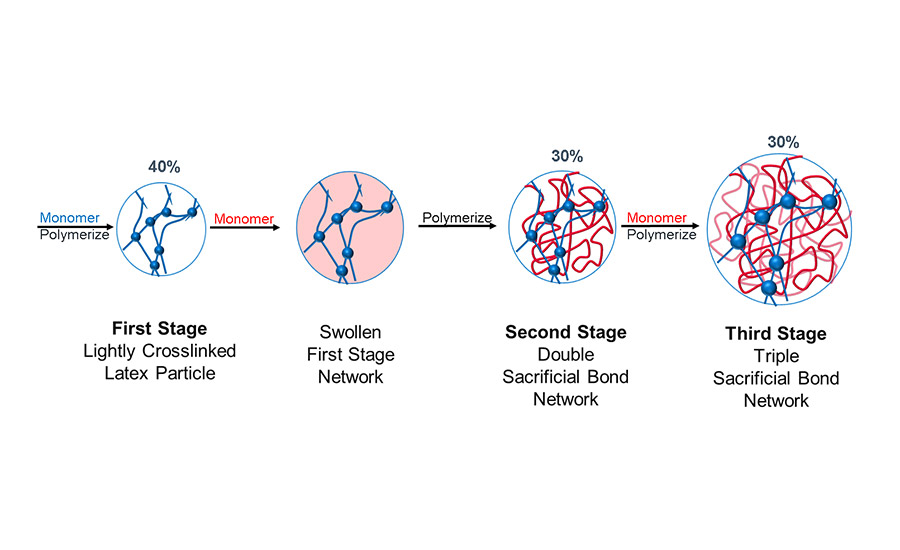 Figure 1. Proposed scheme for the preparation of an intraparticle sacrificial bond network by multistage emulsion polymerization.


The first polymer network was created by gradual addition of monomer with thermal initiation consisting of 40% of the total monomer mixture of 97% butyl acrylate (BA)/2% styrene/1% acrylic acid (AA). Polymerization of this stage was stopped by cooling to slow the rate of thermal initiation, and the second stage consisting of 30% of the total monomer was added all at once to swell the first stage and pre-stretch its polymer chains.

As shown in Table 1, different levels of the crosslinkers allyl methacrylate (ALMA) and divinylbenzene (DVB) were added to each stage in analogy to the butanediol diacrylate used by Ducrot et al. The multistage entry with 0.2 wt% DVB in the first stage and no added crosslinker in the second and third stages is the closest analogy to the crosslinking motif utilized by Ducrot et al.

A control PSA with gradual addition of all the monomer with thermal initiation in a single stage was prepared as well. In all cases, the polymerizations proceeded smoothly, with good particle size control and low coagulum.

Next, the multistage PSAs designed to contain sacrificial bond networks were tested for PSA properties to explore whether their architectures imparted enhanced adhesion or cohesion (see Table 1). However, the control PSA made by a single-stage process held the best balance of properties, with all adhesion measurements above or equal to all other samples and shear results among the best.

Because the allyl group of ALMA is much less reactive than the methacrylate group, it typically does not react to form crosslinks until the concentration of vinylic and acrylic double bonds is very low.10 Accordingly, in this multistage polymer, the ALMA may not have served to crosslink any of the stages independently to create sacrificial bonds and instead may have merely crosslinked the whole polymer particle at the end of the final stage.

On the other hand, DVB, with two equivalent vinylic groups and similar structure to styrene, is expected to react efficiently during each polymerization stage. The samples prepared with DVB crosslinker generally did not have significantly different adhesion from the multistage control and had comparable cohesion, however. This suggests that the level of DVB was not high enough to generate a crosslinked network.

In order to understand the structure and properties of the multistage PSAs further, mechanical and rheological testing was performed on films generated from the PSA dispersions. Measurement of dynamic storage modulus (G’) vs. temperature for the control polymers and polymers with ALMA clearly shows crosslinking in the samples with 0.2 wt% or higher ALMA in the flat response of G’ at high temperature (see Figure 2). The samples with no added crosslinker as well as the sample with 0.05 wt% ALMA have a downward slope in G’ at high temperature, which is consistent with less crosslinking. 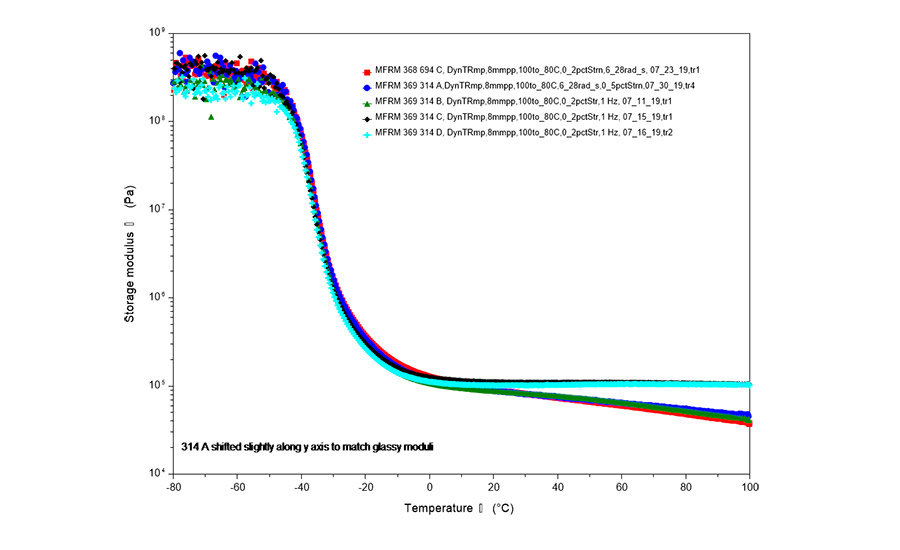 
Figure 3 shows the plot of G’ and G” (loss modulus) vs. frequency for these samples as well. Interestingly, although the PSA properties of the single- and multistage controls were very different, little difference is observed between these samples. The same measurements on samples containing DVB (see Figures 4, 5, and 6) indicate that the differences between these samples and the multistage control are very subtle, with little or no crosslinking from DVB. These data do not indicate whether a sacrificial bond network is present in either the ALMA or DVB samples. 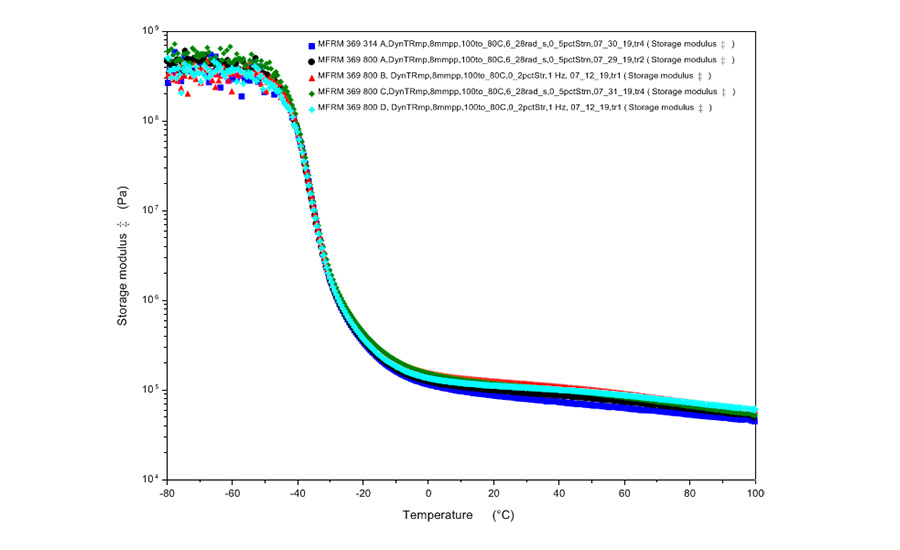 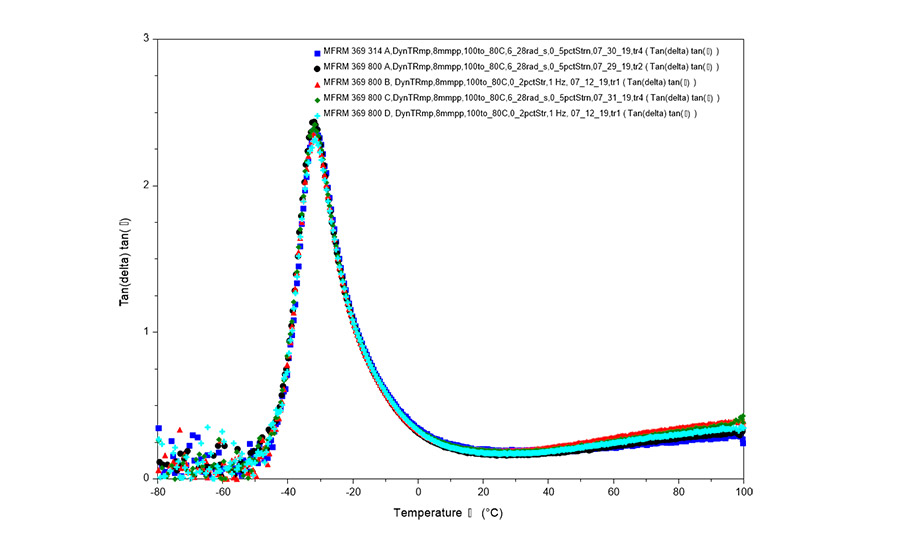 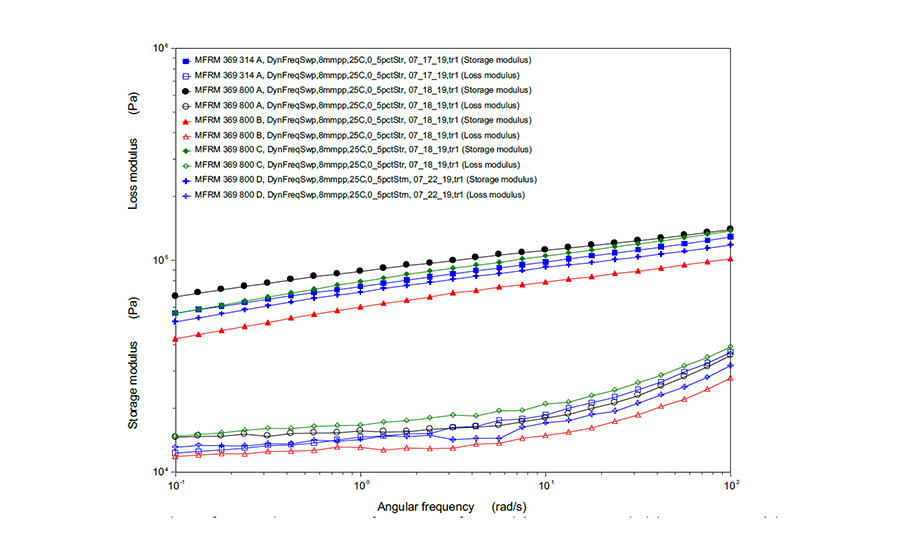 To provide further evidence for or against a sacrificial bond network, selected samples were subjected to a stress-strain in tension experiment in which the strain is increased linearly to a desired maximum value and then decreased linearly at the same rate. A similar experiment was performed by Ducrot et al. to demonstrate the signature behavior of sacrificial bonds in their triple network material.8

The triple network had substantial hysteresis after the first cycle to a given strain, which indicates dissipation by damage to the sacrificial bond network at high deformation. In contrast, the dual-network material generated by Ducrot et al. followed the same path on each straining cycle with no hysteresis because the primary network chains were not fully pre-stretched to behave as sacrificial bonds.9 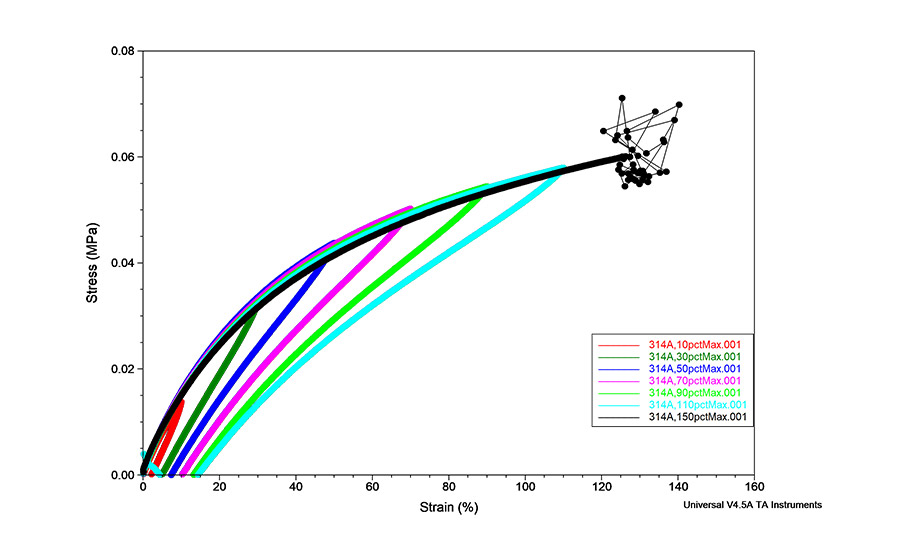 Figure 7. Stress vs. strain cycles for multistage control with no crosslinker (314A) for set of strains from 10-150%, run in order of increasing strain on one sample which failed at 150% strain (black). 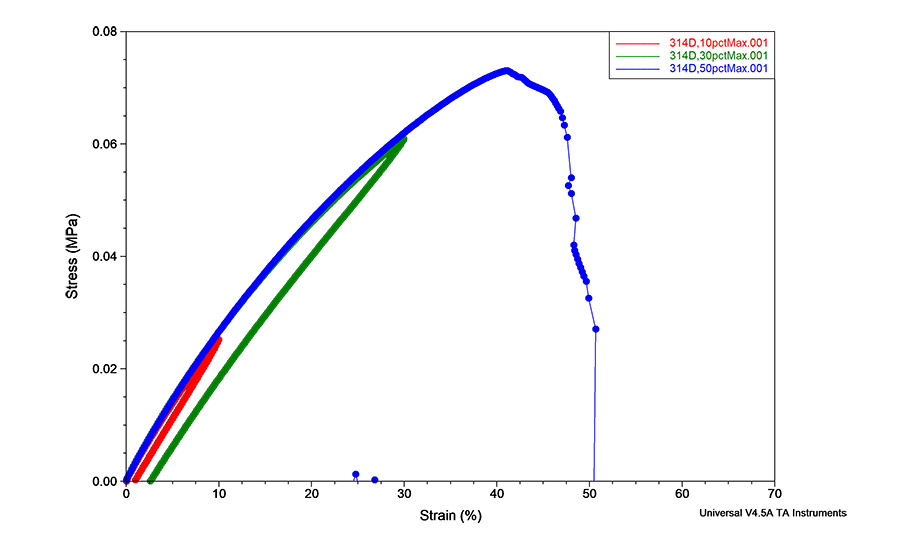 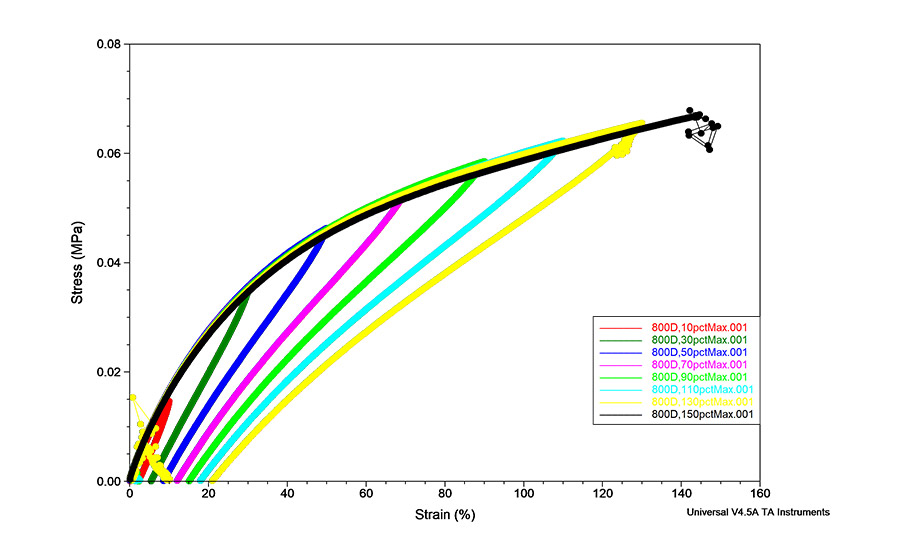 There are several possible reasons that this multistage emulsion polymerization approach failed to produce a sacrificial bond network similar to that demonstrated by Ducrot et al. in solvent/bulk polymerized acrylics. As mentioned, the level of DVB used was insufficient to enable any noticeable crosslinking, so it may not have been sufficient to form a primary network to be stretched to form sacrificial bonds.

Although the level of ALMA used was sufficient to show evidence of crosslinking, no sample was made in which only the primary network was crosslinked with ALMA. Moreover, as mentioned previously, the reactivity of ALMA may cause it to crosslink only after all the polymerization stages are completed.

These issues could be overcome by using a different level of DVB or a diacrylate crosslinker like the butanediol diacrylate used by Ducrot et al. Furthermore, the 30:30:40 primary:secondary:tertiary stage ratio employed in this work may have been insufficient to pre-stretch the primary network.

Hierarchical structures inspired by nature such as sacrificial bonding networks have previously been shown to impart superior mechanical properties to polymeric materials. Nonetheless, an attempt to design a sacrificial bond network into PSA particles resulted in neither superior PSA properties nor the rheological signatures of sacrificial bonds, likely due to subtle factors affecting the formation of a crosslinked network or the weak boundary layers remaining between particles in the PSA film. Further effort is needed to understand how to design superior PSAs based on hierarchical architectures.