Waterborne pressure-sensitive adhesives (PSAs) are the largest class of PSAs by production volume, and most waterborne PSAs comprise polymer dispersions in water. Typically, the major component of a PSA dispersion is a hydrophobic copolymer of acrylic, styrenic, or other vinyl monomers made by emulsion polymerization.

The emulsion polymerization process utilizes hydrophilic components such as water-soluble monomers, water-soluble initiators, surfactants, rheology modifiers, and salts that remain in the final PSA dispersion either associated with the polymer particles or free in the aqueous phase.1 Water-soluble monomers such as acrylic acid (AA) or 2-hydroxyethyl acrylate may copolymerize with more hydrophobic monomers so that the resulting polymer is amphiphilic, displaying hydrophilic groups on the polymer particle surface, or they may form hydrophilic polymers that remain dissolved in the aqueous phase.

Common initiators such as persulfate salts form sulfate polymer end-groups that also occupy the polymer–water interface. Surfactants that are added to PSA dispersions not only to aid polymerization but also to improve dispersion stability and coatability are present both at particle surfaces and in the aqueous phase. Salts, such as buffers or polymerization byproducts, and rheology modifiers, which are often hydrophilic polymers, are further components of the aqueous phase of a typical PSA dispersion. The aqueous phase surrounds the polymer particles, and the charged and hydrophilic components on the particles provide electrostatic and steric barriers to particle coalescence.

As this dispersion is applied and dried to create a PSA tape, label, or other article, the evaporation of water diminishes the aqueous phase and brings the particles closer together.2 Eventually, the particles deform to create a void-free film with interdiffusion of polymer chains across the particle interfaces.

In contrast, studies of biological materials reveal diverse hierarchical structures that often impart superior mechanical performance.6 As shown below (a), two of these structural motifs built up in growing biomaterials are sacrificial bonds and hidden lengths. 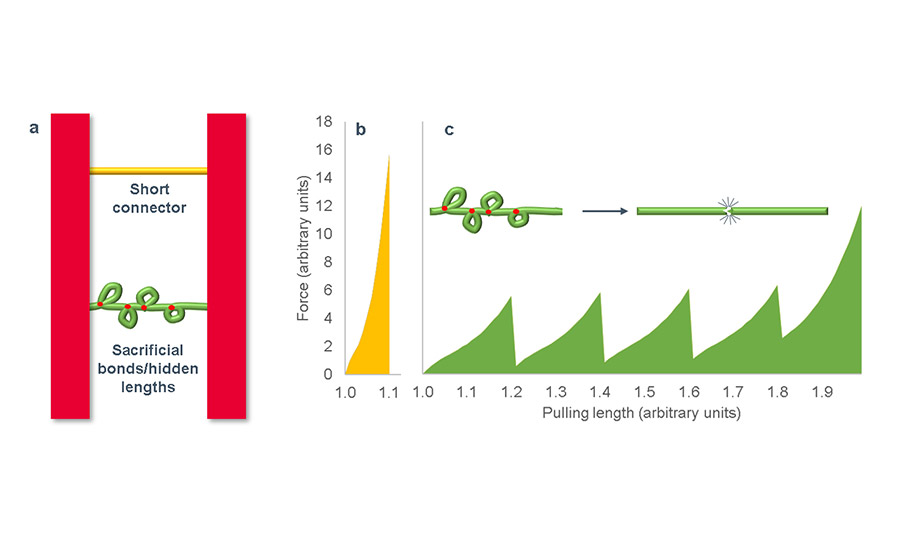 Two surfaces joined by a short connector may require high force to separate them by breaking the bonds of the connector, but the total energy required to separate them is relatively low due to the short extension (b). In contrast, separation of two surfaces joined by a connector containing sacrificial bonds and hidden lengths requires multiple bond-breaking and extension steps, making the material very tough (c).

Although the pioneering work on artificial sacrificial bond networks was performed using hydrogels,7 Ducrot et al. more recently demonstrated a tough elastomeric network employing sacrificial bonds.8 To create the sacrificial bonds, a first network comprising 6-10 wt% of the final material was polymerized from ethyl acrylate crosslinked with butanediol diacrylate (1.45-2.81 mol%) in solvent. The dried first network was then swollen to equilibrium with methyl acrylate and butanediol diacrylate (0.01 mol%), which were copolymerized in situ with UV initiation to create a double network.

Finally, the swelling and polymerization process was repeated to create a triple network in which the first network contains pre-stretched chains that can cleave at sacrificial bonds to dissipate energy as the material is deformed. This hierarchical structure incorporating sacrificial bonds dramatically increased the toughness of the triple network material to the range of that of natural rubber, which benefits from the mechanism of strain-induced crystallization.9

The pressure-sensitive adhesive dispersions were prepared by a multistage emulsion polymerization process in a parallel automated reactor. The principal monomer composition was 97% butyl acrylate (BA), 2% styrene, and 1% acrylic acid (AA). Varying low levels of allyl methacrylate (ALMA) or divinylbenzene (DVB) crosslinkers were incorporated in some stages.

All samples were direct coated on a 2-mil polyethylene terephthalate (PET) film and closed with silicone release liner. The wet drawdowns were dried in a convection oven at 80˚C for 5 min. The samples were coated at a coat weight of 20 gsm. The samples were conditioned in a controlled temperature and humidity room (23˚C, 50% humidity) overnight prior to applications testing.

The adhesive is allowed to dwell on the panel for a set time (typically 20 min or 24 hr) and then peeled from the panel at a 90˚ or 180˚ angle at 12 in./min using a universal testing system. The average force is reported, along with the failure mode.

Shear is a measure of the cohesive strength of the adhesive. A 1 x 1-in. sample is applied to a stainless steel panel and laminated using a roller (4.5-lb roller moving at 24 in./min). The panels are mounted vertically on the shear tester at an angle of 2˚. A 1-kg weight is hung to the bottom of the sample.

The time to failure is recorded as the shear (in hours), along with the failure modes. Typically, the failure mode is cohesive, thus directly correlated with the internal strength of the adhesive.

Failure modes are abbreviated as follows:

Part 2 of this paper, featuring Results and Discussion, will appear in the September 2022 issue of ASI.