Protection of Electric and Electronic Equipment

Choosing the right potting compound for your electronic components ensures their long-term performance.

Potting compounds are sealants or adhesives that are used to encapsulate sensitive electronic components such as chips and sensors, printed circuit boards, integrated circuits, semiconductors, and other components. They are designed to protect these electronic assemblies from challenging environmental conditions, acting as a barrier against contaminants like water/moisture and chemicals. The potting protective layer/matrix is an integral part of the electrical unit, providing the additional benefits of electrical insulation, enhanced mechanical strength, vibration resistance, and heat dissipation.

The global potting and encapsulating compounds market was valued at $3.1 billion in 2021, registering an annual growth rate between 3-4% in the last five years, and is projected to reach $4.4 billion by 2028, despite the temporary impact caused by the outbreak of COVID-19. Potting compounds are used in consumer electronics, automotive, aerospace, energy and power, telecommunications, healthcare, and other industrial applications.

The electronics sector accounts for the largest share of total revenue of the potting compounds market, which has been driven by the growing demand of consumer electronics and the increasing miniaturization of electronic devices. The Asia-Pacific region, with the majority of its consumption coming from China and India, is expected to experience the strongest growth. However, the United States will also show significant demand increases, mainly due to its strong IP positions and onshoring activities.

The growing popularity of electric vehicles is generating promising new opportunities for the potting compound industry as well. The production of electric vehicles is gaining momentum across the entire globe. In turn, the increased integration of electronic systems in vehicles, such as navigation and autonomous driving, will amplify the product demand across the automotive sector. Furthermore, energy and solar power applications are set to capture a substantial share of the potting compound industry in the future. The global solar capacity is growing rapidly due to favorable government initiatives and a positive outlook towards renewable energy. The global electrical potting market is partially fragmented, with some larger manufacturers dominating the market.


The Chemistry Behind the Compound

The number of potting compound formulations in the market is as vast as their potential applications, with resins, polymers, and additives all being used to manufacture them. The raw materials for these potting compounds are offered by various raw materials suppliers. The potting compound market is segmented by the polymer type being used, distinguishing between the dominating thermoset epoxies, polyurethanes, silicones and thermoplastic polyesters, polyolefins, polyamides, among others.

Silicone potting compounds offer the highest levels of flexibility, but the lowest mechanical strength. Silicones are the most temperature resistant and can withstand temperatures up to 250 °C (482 °F) permanently and even higher temperatures for a short duration. This capability allows them to meet all the safety requirements for aerospace electronic applications.

Epoxy potting compounds are designed to work in temperatures less than 180-200 °C (355-392 °F). Epoxy systems provide the highest mechanical strength, but lowest flexibility. They are broadly used in the automotive and heavy machinery industries.

Even though polyurethane (PUR) potting compounds cannot compete with the performance of silicones at high temperatures, their thermal range can easily manage the operating temperatures of many applications. Furthermore, by using suitable polymers, fillers, and additives, the properties of polyurethanes can be varied much more than in any other class of technologies. Their performance exhibits an optimal balance of mechanical strength and flexibility. In addition, their economic advantage makes them often the preferred technology for a wide range of applications.

Polyurethanes are applied as two-component systems — one component (A) contains polyols, fillers, additives, and stabilizers, while the other component (B) is often a modified polyisocyanate. Once thoroughly mixed, the working time should be around 15 minutes, but can easily be tweaked to customer needs by adjusting the accelerator percentage or percentages inside component A. The proven A:B mixing ratio (by weight) is around 10:1, but depends heavily on the formulation of the two components.

Producers of potting systems prefer aromatic polyisocyanates, characterized by a functionality of ≥ 2. For economic reasons, component B comes directly “as-is” from a polyisocyanate producer.

Typical mechanical values seen in the industry for these cured polyurethane systems are a tensile strength of 7 N/mm², an elongation at break of about 120%, and a Shore A hardness around 75. However, depending on individual customer needs, the targeted values can be varied to a high degree.

Typical electrical properties of such a formulation are outlined in the table below. 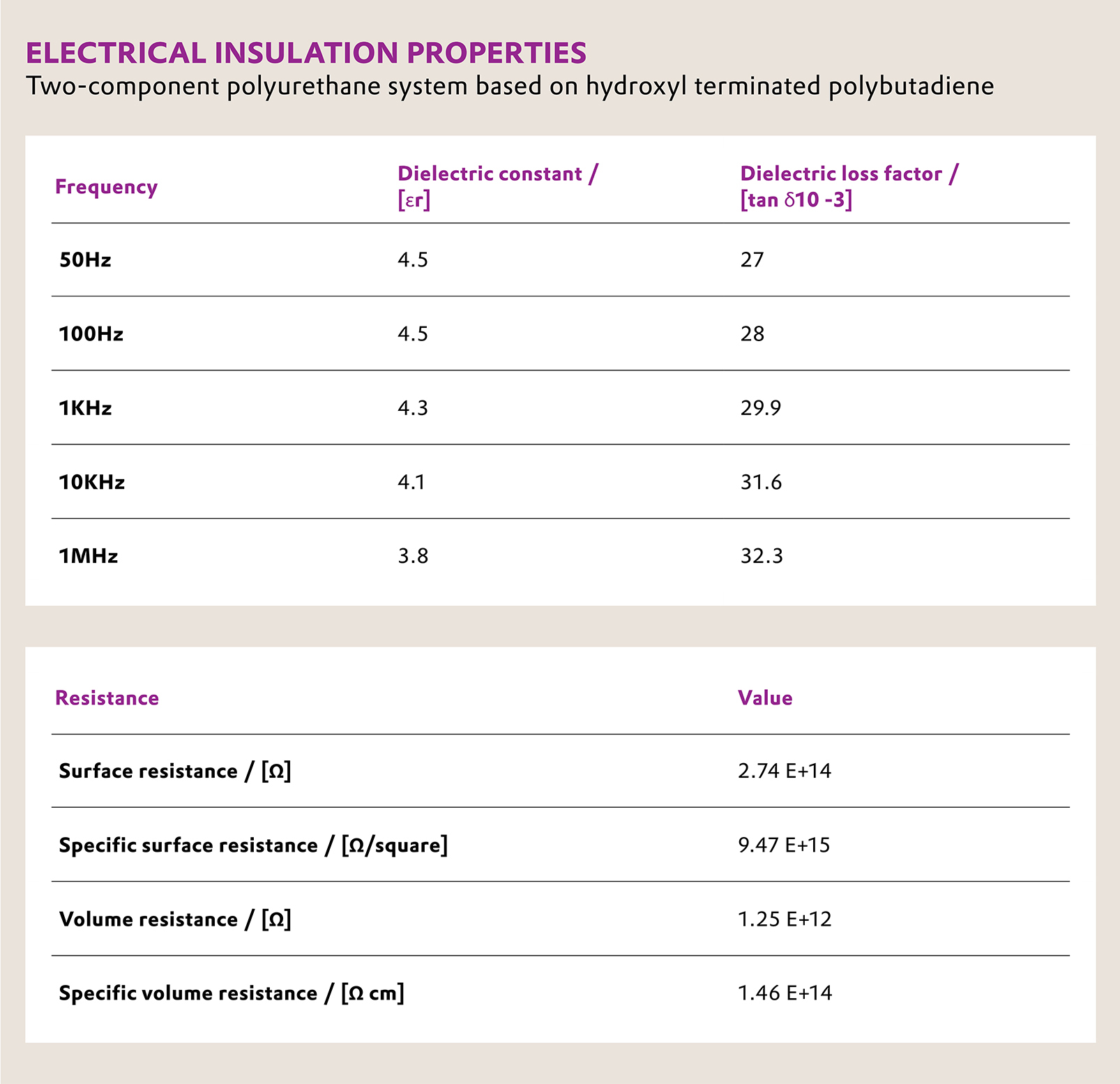 
Despite these properties of PUR systems, the use of polyisocyanates is seen as very critical by workplace protection agencies in several countries. As a result, a growing number of customers have replaced the polyisocyanate component with anhydride grafted polybutadienes*, which can easily react with component A. If this route is choosen, both components can be formulated in a way that would make hazardous labeling obsolete.

In summary, the potting compound market provides a multitude of solutions for a wide variety of requirements and applications. From functionality to benefits to cost, many factors need to be considered when choosing the best potting compound for your specific application. If searching for the most versatile solution, polybutadiene* chemistry provides the most customizable options for the electric and electronics industries.