Chris Whelan is the Director of Business Development, Engineered Wood Adhesives for Henkel. 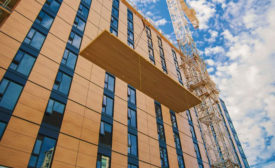 Each year, the debris produced during construction—and in particular, building demolition—represents more than 90% of the total construction and demolition debris generated and sent to landfills in the U.S. That equates to approximately 145 million tons of debris.