The Rise of Automotive Adhesives: A Bonding Story

While adhesives have been tools for human ingenuity since the very beginning, it's been a long road to the sophisticated automotive adhesives preferred by today's OEMs.

It’s been said that hindsight is 2020. To usher in the new decade, we’d like to offer a retrospective on the automotive adhesives—both liquids and pressure-sensitive adhesive (PSA) tapes and films—that continue to redefine the industry. Where did they come from? How have they changed? And what innovative applications are favored by today’s automotive manufacturers?

Bonds in the Beginning

Each step advanced over the last. Once the first commercial animal glue factory opened in Holland around 1700 A.D., the table was set for inroads to major transportation applications. But one problem remained: heat and water quickly degraded animal-based adhesives. For a long time, adhesives on wagons, carriages, and trains were relegated to use as bonding agents for wood and canvas in areas unlikely to be exposed to the elements.

The Carriage Monthly wrote about a new “waterproof glue” in 1911, a time when automobiles and carriages shared the streets.1 This animal glue, when combined with formaldehyde, could be applied cold and would survive in wet environments. General-use automotive bonding adhesives were finally possible.

They say that necessity is the mother of invention. In the early 20th century, automakers needed a way to bond rubber shock mounts to metal parts. Science went to work. By 1927, thermoplastic rubber cements were making metal-to-rubber bonding a commercial reality.

The Adhesive and Sealant Council notes that double-faced PSA tapes first entered the automotive market in the 1950s, for use in mounting faceplates and cosmetic trim. True structural-strength liquid adhesives came in their wake. It wasn’t long before automotive adhesives began replacing rivets, welds, and other fasteners throughout the vehicle. Over the decades, adhesive use has spread from brake shoes to floor underlayment, side mirrors, hood assembly, motor magnets, wire tacking, and more (see Figure 1).

The 21st century has brought even more innovation and refinement—especially in PSA films. It’s possible that we will eventually see liquid adhesives and PSAs eclipse mechanical bonding techniques to represent the majority of bonding agents in automotive manufacturing. 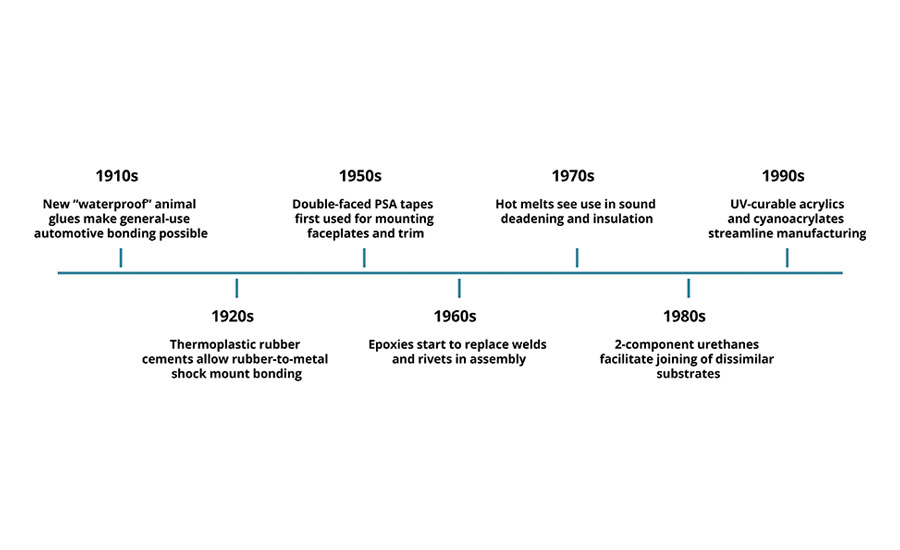 The most impressive innovations of the last two decades have swung toward fast-applying PSAs. In the popular mindset, tapes are still a temporary DIY bonding solution, but this couldn’t be further from the truth. Self-healing protective films, double-sided foam seals, mounting tapes that outlast the bonded components, breathable label polymers, and more are found in today’s vehicles. But what led us here?

This is a perfect time to look back at “The New Century of Adhesives,” an ASI report from September 2000. This snapshot of history speaks to the R&D goals that have preoccupied the last 20 years. Here are a few telling excerpts about the state of the industry at the turn of the millennium:

The rationale behind many of these desires is clear—the materials that make up car bodies had begun a rapid transformation. LSE plastics, mixed metals, and composites were chipping away at predominantly mild steel designs. Environmental regulations and lightweighting have been a major catalyst for these changes.

According to the Adhesive and Sealant Council, over 90% of light vehicle body materials were mild steel in 1995. By 2015, that number had dropped to 40% as the use of high-strength steel, aluminum, and synthetics quickly expanded. PSAs—with double-sided adhesives custom-selected for each material—are a natural companion to the changing auto body.

PSAs are Taking Over

Compared to the heavier metal fasteners, adhesives also cut weight while simultaneously rigidifying the body. Stress is distributed more evenly with adhesives that follow the full length of a bond; this also eliminates concentrations around rivets and punctures in panels. Plastics, in particular, are greatly weakened by stress points from mechanical fasteners. Consistent stress distribution also enables the use of thinner materials.

These traits are attractive on their own, but older liquid adhesives are also giving way to films and tapes for specific applications. Where PSAs were once unable to compete with the strength of epoxies, welds, and rivets, today’s technologies can often outlast the vehicle itself. On top of that, a PSA film or foam provides additional benefits:

Lean manufacturing processes have pushed for incredible efficiency. The speed, reliability, and simplicity of PSAs on a complex assembly line have given the automakers that have embraced them a significant competitive advantage. Over the last 20 years, we’ve witnessed PSAs continue to replace other bonding agents and other products—not just for fastening or structural purposes, but also as paint protection, paint replacement, noise reduction, and glass treatment.

Where Are We Now?

Current manufacturing trends would suggest that we’ve indeed accomplished many of the goals set by the industry in the year 2000, but there’s still a long way to go. Automotive adhesive use is still accelerating.

In 2017, a Center for Automotive Research white paper made a compelling case for a near-future takeover of automotive adhesives.2 The study suggested that adhesives would soon overtake spot welding, screws, bolting, rivets, and all other joining processes as the largest percentage of bonds in a vehicle. According to the paper, this could happen as soon as the mid-to-late 2020s—and continue until adhesives make up nearly 50% of all bonds in the vehicle by 2030.

There’s no telling at what point the steady rise of automotive adhesives will reach its zenith. Continuous R&D progress has made PSAs well-positioned to play a pivotal role in the automotive industry in the 2020s and beyond.

Neils Bray is a contributing writer and Account Manager for LINTEC Automotive. For more information, contact the author at (800) 806-8977 or visit www.lintecauto.com.