Put Some Moxie in Your Epoxy: Toughening Epoxy Adhesives with a Polyurethane Prepolymer

The addition of a low-viscosity, blocked polyurethane prepolymer improves the strength and reduces the cure time of epoxy adhesives.

By Jay A. Johnston, Cassie Popovski

Adhesives play an important role in creating sustainable and resilient infrastructure. While the hybridization of adhesives is not a novel concept, recent innovations in raw materials have unlocked new possibilities for toughened epoxy systems. The reaction of a polyurethane segment into an epoxy polymer has proven to be successful in building and construction applications that require flexibility as well as resistance to temperature and solvents. This study shows that hybrid epoxy-urethane adhesives can achieve higher adhesive strength and faster cure than non-hybridized epoxy adhesives alone.

The North American markets for epoxy and polyurethane adhesives are $2.4 billion and $2.3 billion, respectively, across all industries, as estimated by The Adhesive and Sealant Council.1 Transportation applications make up approximately half of all epoxy adhesive volume, but epoxy adhesives are also often used in the assembly, building and construction, and do-it-yourself (DIY) spaces as well. Polyurethane adhesives are more diversified in their uses, as they can be found in packaging, woodworking, footwear, and leather applications, in addition to those mentioned for traditional epoxy materials. Recognizing the large market size and wide range of applications, it’s no surprise why someone would want to take advantage of both technologies’ strengths.

Both epoxy and polyurethane structural adhesives impart their unique properties to meet the requirements of the adhesive system in which they function. Epoxy adhesives are used in applications requiring rigidity, solvent resistance, and high-temperature resistance. They are, however, brittle because of their high crosslink density. Polyurethane adhesives are widely used in applications requiring toughness, processing flexibility, tunable cure rates, low-temperature cure, and adhesion to many different substrates. By combining the two chemistries, adhesive formulators can take advantage of their complementary properties to achieve a strong yet impact-resistant product.

Minimizing brittleness in epoxy formulations can be achieved through several strategies. One strategy involves creating a second phase in the epoxy matrix that interrupts crack propagation through the brittle epoxy matrix. A second involves the addition of reactive diluents or plasticizers to the epoxy resin.

In phase-separated, toughened epoxies, the second phase should be incompatible with the epoxy matrix and phase-separate uniformly during cure. It is also preferred that the second phase is reactive with epoxy resins so that the hard epoxy phase and the second phase are covalently bonded. In addition, the components should be compatible until polymerization, so that the resins can be stored without separating into layers. If the resins separate during storage, additional mixing will be required before application. The second phase may be formed from thermoplastic resins, high-molecular-weight flexible polyether amine resins, rubber particles, core-shell rubber particles, dispersed acrylic rubbers, epoxy functional fatty acids, nanoparticles, or amine-terminated butadiene acrylonitrile resins.

The novel blocked polyurethane prepolymer uses a bio-based blocking agent. The low viscosity allows for faster and easier handling of the product. The unconventional composition of this polymer, along with the special properties it imparts to the final adhesive, makes it attractive to those who want to reduce the brittleness of their epoxy.

Epoxy reactions are characterized as the reaction of an epoxy resin and a curing agent (sometimes called a hardener). The epoxy functional resin is typically multifunctional and can vary in molecular weight. The reactive moiety is a three-member carbon-carbon-oxygen ring.

Each primary amine can react with two epoxy moieties, so a diamine with two primary amines actually has a functionality of four. This high functionality leads to highly crosslinked polymers that are brittle. Vitrification can occur before the polymerization is complete, trapping unreacted end groups in the polymer matrix and lowering the molecular weight of the polymer. If this happens, the full development of physical properties is limited. 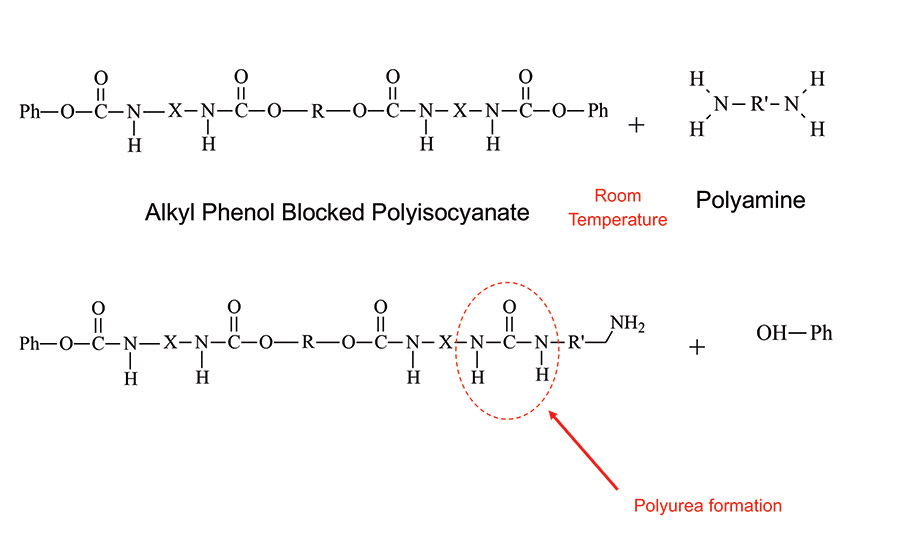 Figure 1. Polyurethane prepolymers blocked with phenolic compounds will react at room temperature with a strong primary amine to form a urea group.
Click chart to expand

Polyurethane prepolymers blocked with phenolic compounds react at room temperature with a strong primary amine to form a urea group (see Figure 1). As opposed to stoving compounds, for instance, heat is not required for a reaction to occur. The prepolymer reacts at room temperature, with the primary amine being substituted for the phenolic compound.

One blocked polyurethane group reacts with one primary amine to form a urea group. This leads to linear or low crosslink density polymers, providing a more flexible structure. 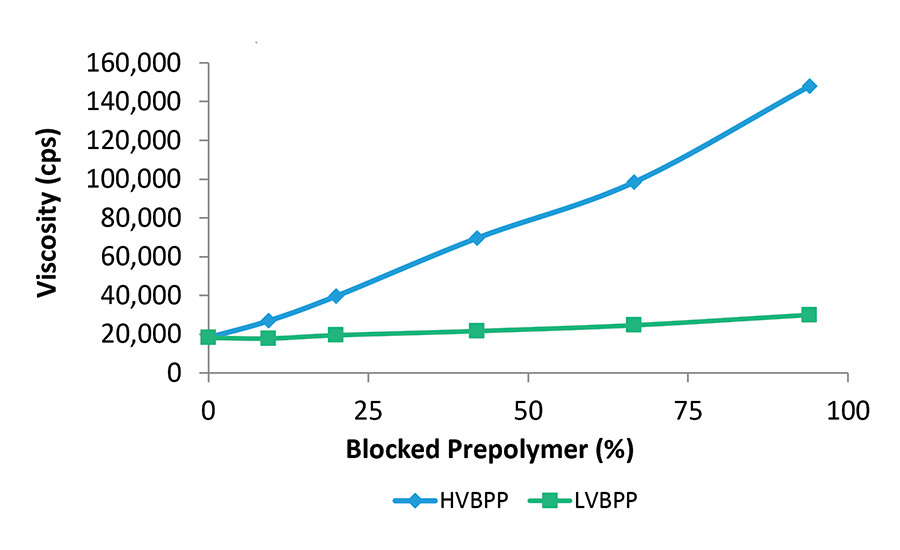 Figure 2. Viscosity of epoxy resin with the addition of blocked polyurethane prepolymers.
Click chart to expand

Increasing levels of a blocked polyurethane prepolymer were added to a simple epoxy resin to demonstrate the blocked prepolymers’ effect on properties. An epoxy resin was blended with increasing levels of either the HVBPP or the LVBPP. The viscosity of the mixture was measured for each formulation using a Brookfield viscometer (see Table 1). Since the viscosity was measured before the addition of amine, no reaction should have occurred.

Interestingly, when either prepolymer was combined with the amine without an epoxy compound (Formulations G and N), the mixture reacted but with a longer gel time. The longer gel time was expected because the epoxy was not present to be catalyzed and the functionality of the system was low. 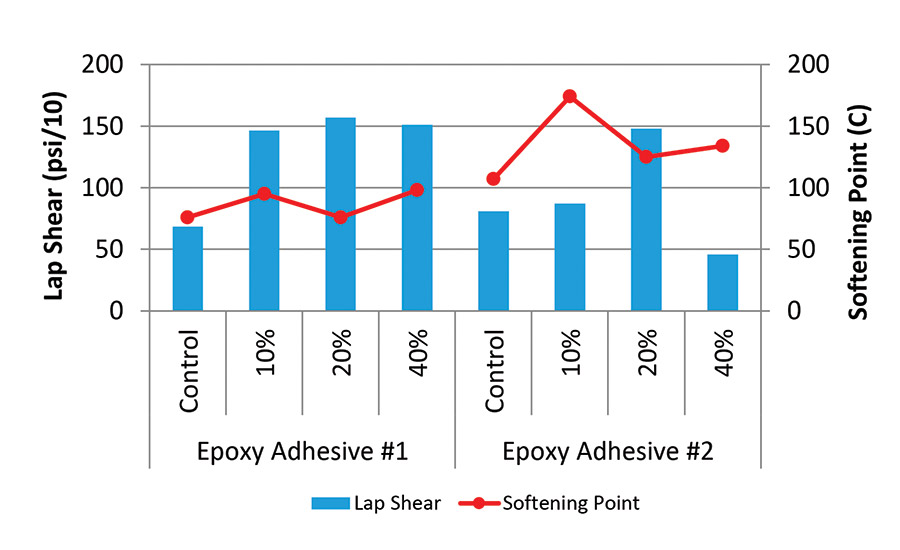 In a previous article, it was reported that the addition of the HVBPP to commercial adhesives increased the strength and the softening point of the adhesive.3 These commercial epoxy adhesives were purchased at a home improvement warehouse. An appropriate amount of HVBPP and a stoichiometrically adjusted amount of diamine were added to each adhesive.

These findings were confirmed with testing on a second commercial epoxy adhesive. Increasing the blocked prepolymer content to 20% improved the lap shear strength. Softening points were increased with the addition of the HVBPP at all concentrations (see Figure 3). 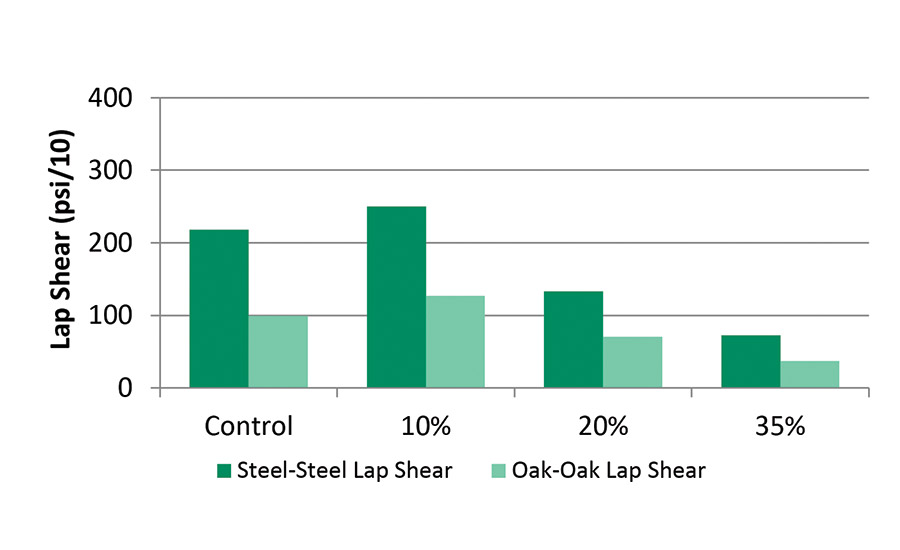 A second commercial epoxy adhesive was tested. Lap shear strength on oak wood increased when 10% of the LVBPP was added to the epoxy adhesive (see Figure 5).

A low-viscosity blocked prepolymer was developed to toughen epoxy resins. The use of an alternative bio-based blocking agent makes it a unique raw material for adhesive formulations. The low viscosity allows the product to be handled easier, making drum emptying more efficient. Unlike previous generations of tougheners, this prepolymer has a minimal effect on the viscosity of the epoxy/blocked prepolymer mixture.

Testing revealed that, in some cases, the low-viscosity toughener improved the metal lap shear strength of commercial epoxy adhesives. In all cases tested, the adhesion to wood was improved with the addition of the low-viscosity blocked prepolymer to a commercial epoxy adhesive. Overall, the new material shows comparable performance to previously available products and provides a unique advantage in lower viscosity of both the product and formulations made with it.

Watch our interview with Jay Johnston in this ASI Insider!

Figure 1. Polyurethane prepolymers blocked with phenolic compounds will react at room temperature with a strong primary amine to form a urea group.
X

Figure 2. Viscosity of epoxy resin with the addition of blocked polyurethane prepolymers.
X

Jay A. Johnston is a Senior Scientist at Bayer MaterialScience LLC.

Cassie Popovski is the Marketing Manager of Infrastructure for Covestro, LLC. For additional information, call (412) 413-3983 or visit https://solutions.covestro.com.