The proper interaction between polymer and wax is required to achieve specific properties in hot-melt adhesives.

Hot-melt adhesives (HMA) are formulated systems with extensive use in packaged goods, particularly in the bonding of cardboard boxes.1 This type of system requires the application of the polymer/tackifier/wax adhesive in the molten state, followed by the adhesion action under an operation window in which the low-viscosity adhesive spreads over the substrate and rapidly solidifies to make the bond. In this scenario, the proper interaction between polymer and wax is required to dial in the specific physical properties and kinetics of solidification to successfully maintain the bond under a variety of conditions.

A recent study explored the basics of some of these interactions using blends of metallocene polyolefin elastomers and a selected range of waxes to probe their degree of interaction and their effect on viscoelastic properties. For this purpose, the study combined calorimetric and rheological results to better understand the kinetics of crystallization.

Blends were prepared from a selection of: a metallocene polyolefin elastomer with a crystallization temperature (Tc) of 72°C; and a set of Fischer-Tropsch (FT) waxes with either a lower, comparable, or higher crystallization temperature relative to the polymer (see Table 1). As expected, the waxes had a much higher enthalpy relative to the polymer. To better appreciate changes in the differential scanning calorimetry (DSC), a series of mixtures was melt-blended by adding wax at loads that match 1/4x, 1x, and 2x the polymer enthalpy (or crystallinity).

Sample characterization was performed using DSC and dynamic mechanical analysis (DMA). DSC was carried out using a cooling rate of 10°C/min under a nitrogen atmosphere. DMA was measured using an ARES-G2 equipped with 8-mm-diameter plates using a 1.2-mm gap. The blends were trimmed at 120°C, and the viscoelastic properties were measured on the cooling scan from 120°C to 30°C using a cooling rate of 10°C/min, a frequency of 10 rad/sec, and an auto strain range of 0.05-5%.

Both polymer and wax HMA components are ingredients susceptible to crystallization. In the case of the polymer, the random sequences of ethylene and comonomer results in polymer chains with an average length of ethylene runs that can order and form crystals.2-3 Similarly, typical waxes for HMA are complex blends of alkanes4 introduced in the formulation to drive solidification of the adhesive as it crystallizes and to reduce the adhesive viscosity when in the molten state.5

Considering both materials form polyethylene crystals, there have been studies6 to understand their synergistic interactions to speed up solidification and reduce the time required for the adhesive to set. However, maximizing the interaction between both components has not been a trivial task.

In a common HMA formulation, the typical use of tackifiers has been shown to introduce a dilution effect that, in most cases, resulted in a net delay in solidification. In addition, the formation of crystals has been described as a complex and dynamic phenomenon heavily influenced by the effect of molecular weight, overall composition and composition distribution, ingredient concentration, and even the cooling rates experienced during adhesive application.

Considering the complexities of the phenomena, for simplicity, the kinetics of crystallization was established using DSC at cooling rates of 10°C/min. (It should be noted that this is much lower than experienced in real processes.) Considering the much higher enthalpies of the waxes, three loads at much lower concentrations than those present in typical formulations were explored and melt-blended with the polymer, intending to match its crystallinity from 1/4x to 2x. The polymer-to-wax ratio used in the blends is shown in Table 2. 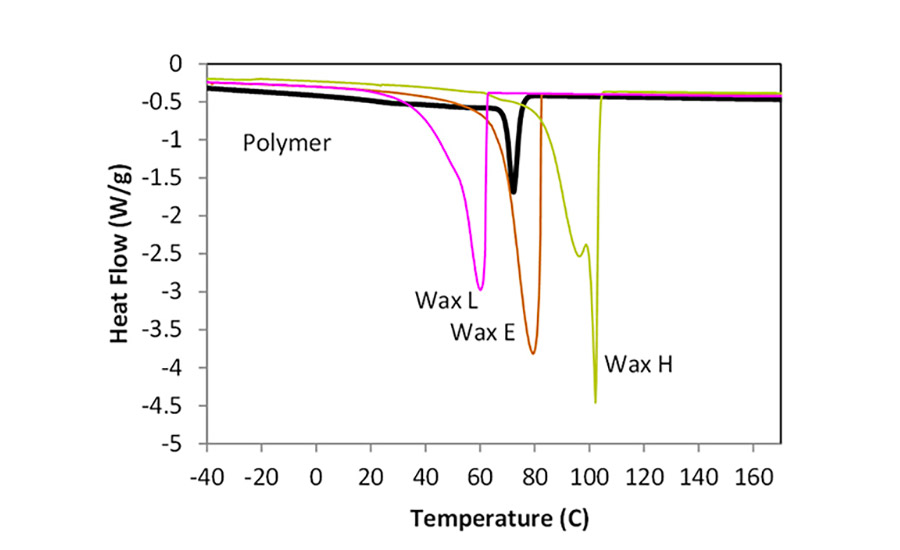 To establish the effect of adding the various waxes to the polyolefin elastomer, the binary blends were characterized using DSC and DMA. For simplicity, Figure 2 and Figure 3 show the specific example when adding waxes to match 1/4x of the polymer crystallinity. Both figures show a distinct behavior when the polymer was blended with wax E with comparable kinetics of crystallization. 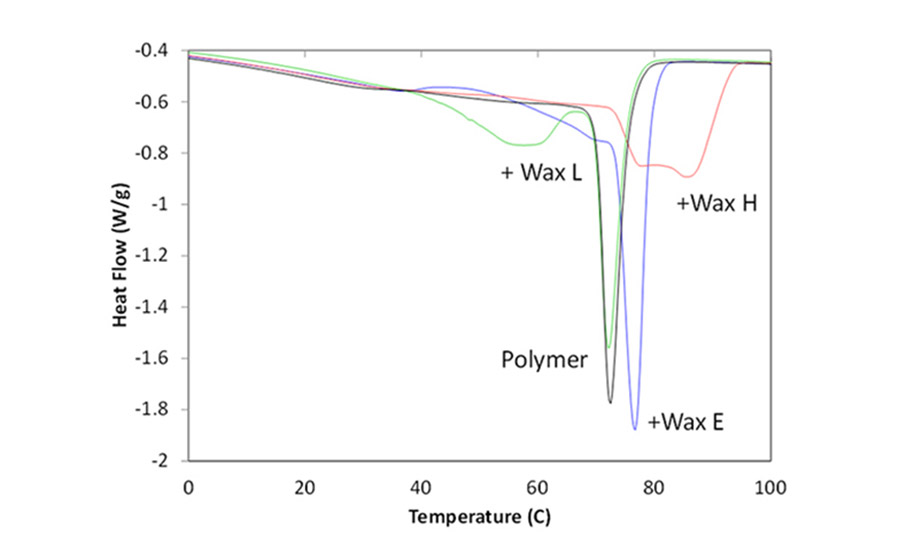 In the case of the DSC, Figure 2 shows that the binary blend with Wax E mostly preserved the sharp crystallization peak compared to the polymer with a minor shoulder toward lower temperatures. Figure 3 shows for this particular blend the steepest change in modulus—close to four orders of magnitude of the blend crystallized with a corresponding sharp, simple drop in the phase angle. 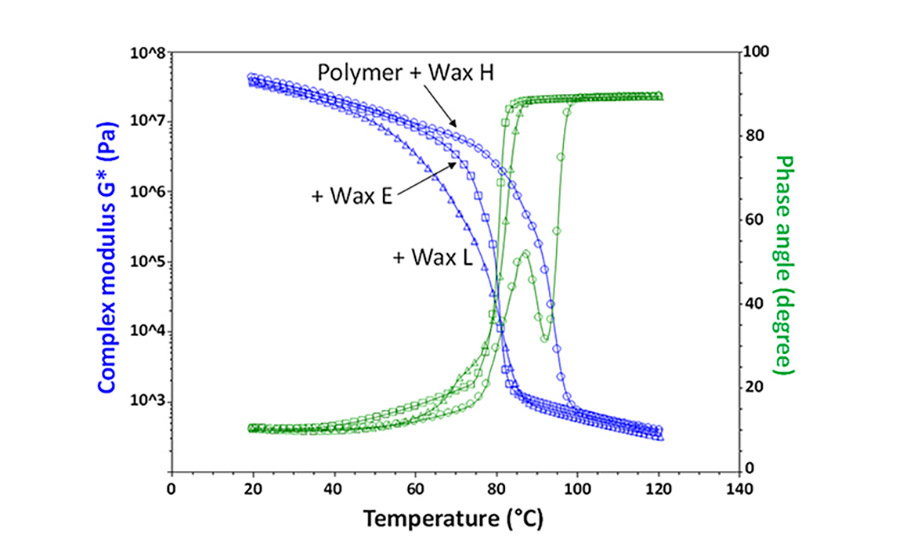 At the relatively low concentrations of wax E added to the polymer, neither DSC nor DMA showed any signs of two phases expected for this type of blend. To clarify this expectation, a couple of additional concentrations were explored to match 1x and 2x the polymer crystallinity (see Figure 4 and Figure 5). 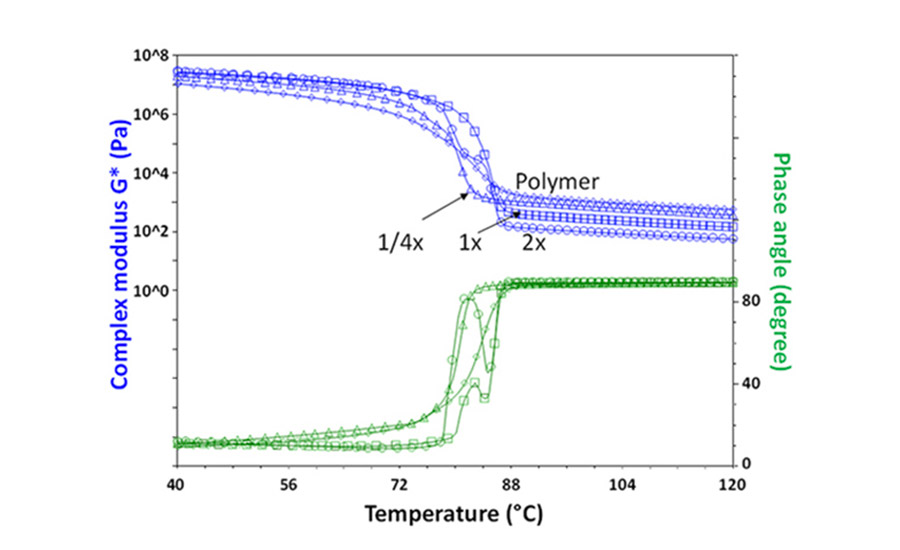 Interestingly, the viscoelastic properties of the blends shown in Figure 4 were the most telling in terms of the presence of two phases, specifically as shown by the down and up variations in the phase angle profile around 80°C. On the other hand, as expected, although the DSC profile of the blends did show a slight broadening effect, independent peaks for each phase were not appreciable. Finally, DMA results also showed a reduction in viscosity of about one order of magnitude in the case of the 2x blend (at 40% wax) in the molten state as the wax concentration was increased. 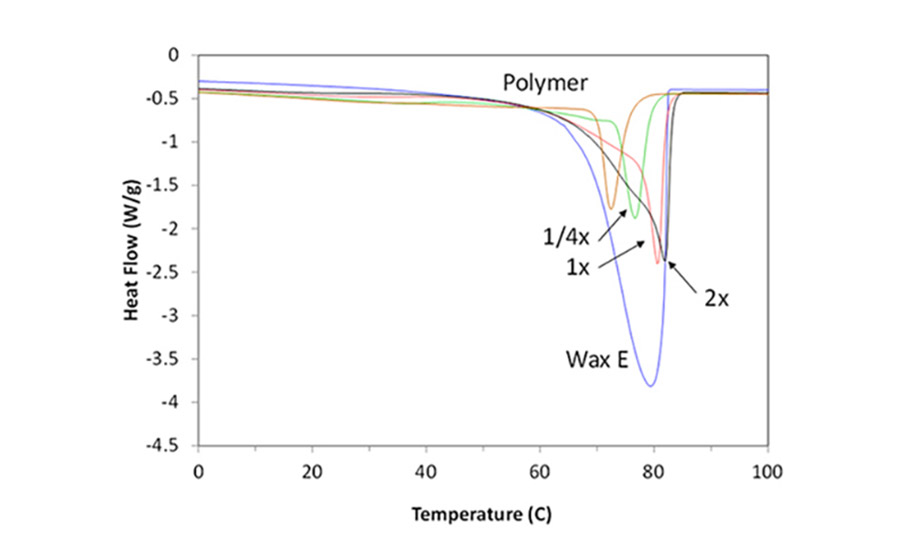 Figure 5. DSC profile of the polymer blended with a wax with comparable crystallization temperature (E) at three concentrations matching 1/4x, 1x, and 2x the polymer crystallinity.

Hot-melt adhesives are formulated systems in which the polymer-wax interactions can dramatically impact the adhesive solidification and therefore tailor the speed of the bonding event. In this study, a practical assessment of the polymer-wax interactions was established for a metallocene polyolefin elastomer and a series of FT waxes with distinctly different kinetics of crystallization.

As expected, waxes with slower or faster kinetics of crystallization effectively sped up or delayed the crystallization of the polymer-wax blends, respectively. Interestingly, the results showed that in the case of systems where the polymer and wax have comparable crystallization kinetics, DSC illustrated a minor broadening in the crystallization profile (and a melting curve, not shown). Though at first sight such observation could be taken as an indication of complete cocrystallization between both ingredients, DMA phase angle information clearly shows signs of two phases.

For more information, contact the lead author at jctuberquia@dow.com or visit www.dow.com.

Note: This article is based on a paper given at the 44th Annual Meeting of the Adhesion Society, a virtual event held in February 2021.